Poseidon's Warrior Colt Pulls Off Another Upset in Champagne 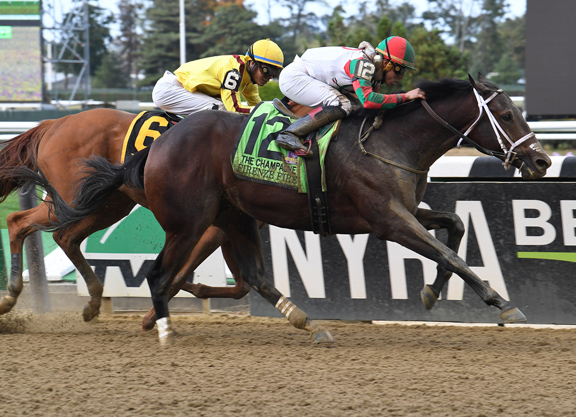 Firenze Fire, upset winner of Saratoga's GIII Sanford S. July 22 and a punchless fourth in the GI Hopeful S. most recently Sept. 4, lined up as the only runner with previous graded stakes experience in this large field.

Away alertly from his wide draw, the Mr. Amore homebred was quickly outsprinted in 10th through sharp fractions of :22.90 and :45.94. The bay caught the eye as he began to wind up while saving ground on the far turn. He was tipped widest of all into the stretch and came charging over the top to punch his ticket to the GI Breeders' Cup Juvenile.

“I was really surprised on the turn,” winning trainer Jason Servis said. “Irad [Ortiz Jr.] was loaded. He was flat [in the Hopeful]. The week before the race the horse was coughing, but sometimes you've got to run them. Everything's there, it's in the moment. You run them and you move on.”

Ortiz added, “He broke in front, but I took him back like the way we've been working him and it worked out perfect for us. When I asked him, he exploded. He responded very good. Past the three-eighths pole, I still had some horse and he hadn't moved yet. He's been working good so I knew when I asked him, he was going to be there for me.”

Firenze Fire became freshman sire and 2012 GI Alfred G. Vanderbilt H. hero Poseidon's Warrior's first winner when scoring at first asking at Monmouth in June and was also his first stakes winner following the Sanford. Firenze Fire's dam My Every Wish, second in both of her career attempts, was claimed out of her finale for $16,000 by Mr. Amore Stable and Servis at Aqueduct in April of 2012. Firenze Fire is her first foal. “What can I say? A Grade I homebred,” Servis said. “We claimed the mare, she was no good, so we put her in the barn for two years, and then Ron [Lombardi, the owner] decided to breed her and he we are. It's a good story.” The $40,000 KEESEP yearling My Every Wish is also represented by an Istan filly of this year. She was bred back to Fast Anna. Firenze Fire's second dam is a full-sister to 2011 Broodmare of the Year Oatsee (Unbridled), herself the dam of MGISW Shackleford (Forestry), GISW Lady Joanne (Orientate), MGSW Baghdaria (Royal Academy), MGSW Afleeting Lady (Afleet Alex) and SW & MGSP Stephanoatsee (A.P. Indy).