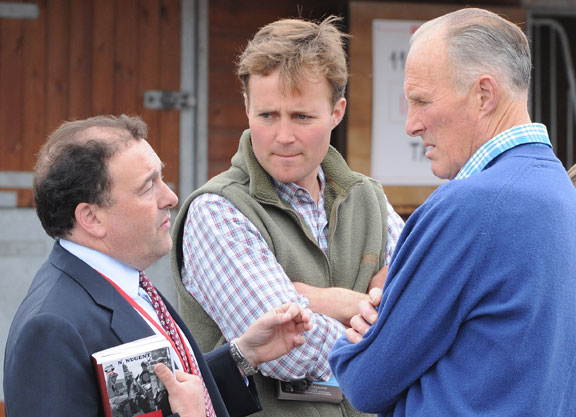 Whatton Manor Stud, halfway between Grantham and Nottingham, has thrived under the Player family for over 40 years. TDN‘s Gary King sat down with Ed Player to discuss the farm’s strategy, and breeding plans for the 2019 season.

GK: It’s obviously an extremely busy time at Whatton Manor. Would you run through some of the mares on the farm, and their breeding plans for the season ahead?

EP: We’ve got Elpida, who is the dam of Sporting Chance (GB) (Kodiac {GB}). He was a very smart 2-year-old last year, winning a couple of nice races, including the G3 Prix Eclipse at Maisons-Laffitte. He’s trained by Simon Crisford. The mare is owned by Ropsley Bloodstock/St Albans Bloodstock, and she’s going to Kingman (GB) this year. She’s in foal to Ardad (Ire) at the moment–obviously that foal will be bred on a similar line to Sporting Chance.

It will be pretty exciting to get a Kingman out of the mare. She breeds a very nice foal, and her Champs Elysees (GB) colt made 90,000gns in Book 3 last year [purchased by Kevin Ross Bloodstock].

GK: Have you had a couple of Kingmans on the farm before?

EP: Yes, we’ve had quite a few. Historically we’ve had a good few of George Strawbridge’s at Whatton Manor. We had Look Around (GB) who was born and bred here. She won a nice listed race last year at Sandown for Andrew Balding.

We have Ensemble (Fr), whose 2-year-old called Felix The Poet (GB) (Lope De Vega {Ire}} is in training with Archie Watson. He won twice last year and we think he could progress further this year. Chica Loca (Fr), who is in foal to Siyouni (Fr), she’s also going to Banstead to visit Kingman. Her 2-year-old is with Andrew Balding and he broke his maiden nicely in October at Newbury. He’s called Good Birthday (Ire), he’s by Dabirsim (Fr), and King Power bought him for €500,000 at Goffs Orby.

GK: You’re clearly an admirer of Kingman. What impressed you most about his first juveniles last year?

EP: We’ve always been huge fans of Kingman. Looking at the Kingmans I saw they were all big rangy kinds of horses, and none of them particularly look like 2-year-olds to me. He had lots of really nice winners throughout the year, and tellingly a few really impressive looking ones at the back end as well. John Gosden’s Calyx (GB) was a brilliant winner of the G2 Coventry S. at Royal Ascot which really got the ball rolling. They just look like types that will improve massively from two to three. I still think there’s a lot of trainers who haven’t run them, so you’ve got some lovely ones to come out early this season. We’ve always loved him, we’ve always used him, and we’d love to use him more going forward.

GK. How about some of the other mares on the farm. What have you planned for them?

EP: Salutare (Ire), the dam of Worth Waiting (GB)–who was fourth in the G1 Prix Vermeille at Longchamp for David Lanigan-is returning to Bated Breath (GB) this year. It just seemed the obvious thing to do.

GK: Bated Breath is clearly a rich source of winners, and seems like great value at £10,000.

EP: We’ve done well with him; we obviously bred Worth Waiting. We also bred a nice horse called Awe (GB), who is with William Haggas. Awe is the half-brother to Headway (GB) and he won his maiden really well for China Horse Club. So we’ve had a couple of good ones; everything we’ve had by Bated Breath has been a winner. We’re big fans of the stallion. We’ve got a couple of mares in foal again, but this particular mating made sense.

We are pretty hopeful that Worth Waiting might win a Group 1 this year. David Lanigan thinks she’s strengthening up the whole time. He was a bit disappointed she didn’t win the Vermeille, she just went a bit quick. So a full-brother or full-sister to Worth Waiting would be pretty exciting for us.

GK: When do you make the decision about which horses you are going to sell, and what you plan to retain?

EP: Salutare is getting on a bit, she’s 19 now. We’ve got an Al Kazeem (GB) yearling filly which we are going to keep. If Worth Waiting was to go on and win a Group 1 and someone wanted to buy the Bated Breath for lots of money, I think we’d probably accept it. But we would be very happy to keep it as well.

Another mare who is getting on a bit but has been a great servant is Our Poppet (Ire), the dam of Overdose (GB). She’s 22 now, she’s got a Kingman yearling, she’s in foal to Mayson (GB), and she’s going to go to Lightning Spear (GB).

GK: What do you find most appealing about Lightning Spear?

EP: We’re big fans of Lightning Spear and we are going to send three of our own mares to him. We feel he was a hell of a good racehorse, he’s everything you’d want in a stallion. He’s a horse that could quicken, he was incredibly tough, he was pretty consistent, he was sound, and he’s a lovely looking individual. Pivotal (GB) is obviously going incredibly well. So why wouldn’t you want to use Lightning Spear? We’re also keen to support local studs. Tweenhills has made a real effort to get lots of good stallions, so we are thrilled with that.

GK: Are you sending any mares to Roaring Lion?

EP: We’ve got a mare for him called Minwah (Ire). Her yearling by Dark Angel (Ire) made 420,000gns and he’s going to Sir Michael Stoute. She’s in foal to Lope De Vega (Ire). We just thought her make and shape would really suit him.

GK: Roaring Lion will clearly get a ton of support at stud. What do you like most about the son of Kitten’s Joy?

EP: He was just an exceptional racehorse. When you go and see him, he moves so beautifully, and you can see why he was a runner himself. He’s so light on his feet, beautifully balanced, and he was incredibly consistent. He took everything in his stride and if he breeds them like him, they will be racehorses. There’s absolutely no doubt about that. It’s also nice for us not having to travel all our mares to Ireland or France. It just makes life a lot easier if we have farms standing good stallions in this country.

GK: I suppose that leads to the inevitable question about Brexit and its potential implications. Is the uncertainty impacting on your decision making?

EP: It’s not, whether that’s right or wrong. I like to think that it will all be sorted out. But the people negotiating the deal don’t know what’s going to happen, so what chance have we? You talk to all the shippers, and they think they can solve it whichever way it falls, but it’s just going to be a pain if there are custom checks and everything else.

GK: Has the market, particularly the struggles at the bottom to middle end, influenced your strategy this year?

EP: It has definitely impacted our decisions. You have to be very careful which stallions you use. Where possible we always try to use proven stallions, but you can’t do that for every mare. So you mix that in with so-called sexy first-season stallions, and then you always have to take a punt on some second- and third-season stallions as well. You just have to back your judgment on those.

We’re backing stallions like Almanzor (Fr) at Haras d’Etreham, and we are using Shalaa (Ire) at Haras de Bouquetot. They are the kind of nice second- and third-season stallions that we’re choosing. Aclaim (Ire) at the National Stud is another one along those lines.

But we do try to use proven stallions as much as possible. We’ve been big supporters of Showcasing (GB) over the years. We are sending another mare to him this year, and he covered two of our own last year as well. We try to be very careful with what we use but you’re always going to get some wrong. Following on from the results last year, we are trying not to cover mares that we don’t think are going to get into a premier sale.

GK: I’m sure we have probably skipped over a few more high profile mares on the farm…

EP: We’ve got a couple of other pretty nice mares including God Given (GB). She was an extremely talented Group 1 winner, and is going to Lope De Vega this season. She’s a beautiful-looking mare by Nathaniel (Ire). I still feel like Lope De Vega has got further to go. We are big admirers of what he has achieved at stud. He’s getting a bit expensive for our own mares, but I think he’s going to keep getting better and better. He had an exceptional year last year, including Newspaperofrecord (Ire)’s win at the Breeders’ Cup, and I don’t see why he won’t keep going.

Montare (Ire), the dam of Journey (GB), has a Dubawi (GB) yearling, she’s back in foal to Dubawi and she’s actually another one going to Kingman. Thankfully we have three other mares going to Siyouni (Fr) as well.

GK: We have been running a series on value sires in TDN recently. Who do you consider as a value sire, at both the proven and unproven stage?

EP: I think Overbury’s Cityscape (GB) represents exceptional value at £5,000. He’s got a lot of very good horses from a small first crop, and his stats are exceptional. I think he’s still underrated and he’s certainly a stallion that we will be using on some of our mares. Another proven one that we like is Camacho (GB) at Yeomanstown Stud in Ireland. He’s still very good value at €12,000, especially after siring Signora Cabello (Ire) and Teppal (Fr) last year.

And of the unproven, I think Lightning Spear is good value for the reasons discussed earlier. I also think Shadwell’s Muhaarar (GB) has been reasonably priced since the start at £30,000. I suppose now is the time to see whether they can run or not, but I can’t see why they won’t.