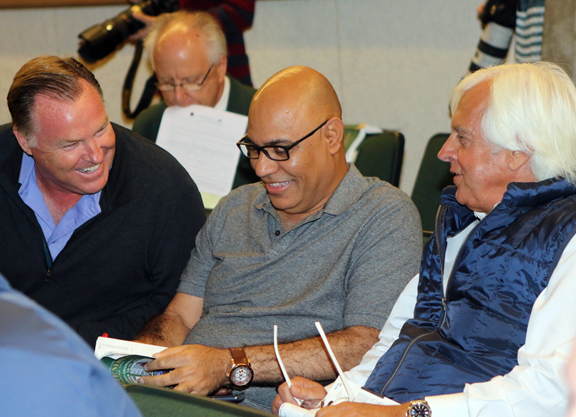 During just three years of operation, Phoenix Thoroughbreds has already amassed a remarkable record of success on the racetrack and recently become active in the commercial breeding venue with its first group of homebred yearlings selling in Australia. Now the Thoroughbred investment fund, launched by Dubai-based businessman Amer Abdulaziz in 2017, is in the midst of its first season of pinhooking 2-year-olds in the U.S. Active sellers at the Ocala Breeders' Sales Company's March Sale and the Fasig-Tipton Gulfstream Sale, Phoenix will offer, alone or in partnership, a handful of juveniles at next week's OBS April Sale.

“As an investment fund, I felt like it was important to show different activity throughout a calendar year,” Phoenix vice president Tom Ludt explained of the operation's expansion into pinhooking. “So we bought some horses with the intention that they would be pinhooked. I just thought it would be a smart play for the group, as we develop more and more investors, to have something going on in all aspects of the game.”

Observers might be curious about the fund's business plan, but Ludt said the pinhooking prospects are at auction to sell.

“We buy to race, we bought some weanlings to pinhook and we breed to sell,” Ludt said. “We're in every aspect of the game and this [pinhooking juveniles] was just the next step. I'm a little nervous because I'm sure people are going to say, 'Why are they selling?' But it's just part of an investment program. We think these are horses that we bought that can be sold at a profit and it will help the overall investment fund.”

The Phoenix team purchased 11 pinhooking prospects last fall, but Ludt said he didn't go into the yearling sales with a specific number of individuals in mind.

“One of the good things about being a large investment fund, it's not traditionally a set number of horses or a set dollar amount,” Ludt explained. “At this point, I've been given the luxury of having the freedom to pick and choose and do what's best. I probably bid on 25 horses to pinhook and got 11. I could have bought some more, but when you're pinhooking, to me–and I don't have the experience that some of these guys do in Ocala–there is just a price point that I didn't want to gamble and get too high. Then you are almost forcing yourself to potentially buy it back to race and that goes against what our business plan was.”

After selecting the horses and the horsemen to handle them, Ludt has taken a more hands-off approach in the run-up to the sales.

“I put the horses with Eddie Woods, Niall Brennan and Ciaran Dunne,” Ludt said. “Obviously, very seasoned, experienced guys that do this. I picked who I thought were really good guys who do this for a living and, once the horses are in their hands, all I am is a coach. I let them do all the work.”

Among Phoenix's early-season successes at the 2-year-old auctions, the operation sold a colt by Constitution (hip 174) through Eddie Woods's consignment at the Gulfstream sale for $600,000. The youngster was purchased by Phoenix for $200,000 at last year's Keeneland September sale.

Phoenix was the name on the tickets last fall for a pair of yearlings who will head through the ring at the OBS April sale next week. Hip 225 is a daughter of Lemon Drop Kid out of Knysna (Maria's Mon), a half-sister to graded stakes winner Seaspeak (Mizzen Mast). Consigned by Dunne's Wavertree Stables, the bay was a $250,000 Keeneland September yearling purchase. Hip 1017 is a filly by Into Mischief out of multiple stakes winner Callmethesqueeze (Awesome Again). Consigned by Niall Brennan, the youngster was also purchased for $250,000 at Keeneland September.

With a few home run horses mixed in with less profitable transactions, Ludt stressed the importance of maintaining a big-picture focus in determining the success of the new pinhooking arm of the Phoenix operation.

“When I broached this idea with Amer, I told him, 'I don't want you to judge me per horse. Judge me on the crop.' We are a fund, so I have to let horses go. And if it's at a loss, it's at a loss. You have to be careful you don't get caught looking at things individually versus the business model. That's the hard part about the whole pinhooking deal. If you paid $100,000 and the market saying it is worth $70,000 now, as much as your ego is hurt, you've got to let them go or you're going to get stuck with them. We have a couple going to the Timonium sale and after that I'll be able to evaluate if this was a successful venture.”

Phoenix has campaigned horses in partnership and that approach has carried over to the pinhooking arena.

“We are a fund, it's good to play in a very diversified portfolio and it's fine to play as a partner,” Ludt said. “We race some horses in partnership and it's no different in pinhooking. Obviously, if Ciaran liked a horse, and we were going to bid on it, let's go together and let him run the show. And that's what we did. We did the same thing with Niall on a couple.”

Ludt has wracked up the frequent flyer miles this spring, with trips between Dubai, Australia and his California base as Phoenix continues to find success across the globe. The stable was represented by G1 Dubai World Cup runner-up Gronkowski (Lonhro {Aus}) at Meydan in March and Loving Gaby (Aus) (I Am Invincible {Aus}) was recently second in the G1 Inglis Sires S. in Australia.

The Phoenix colors will make a second straight appearance in the American Classics after Lady Apple (Curlin), owned in partnership with KatieRich Stables, earned a spot in the GI Kentucky Oaks with a win in the GIII Fantasy S. at Oaklawn Park last Friday. That sets the operation up for a busy Oaks/Derby weekend at Churchill Downs, with Captain Von Trapp (Trappe Shot) expected to start in the GIII Pat Day Mile, Dream Tree (Uncle Mo) in the GI Humana Distaff and Lyrical Lady (More Than Ready) in the GII Eight Belles S.

“We couldn't be happier,” Ludt said. “The success we are having is just unbelievable. We are getting ready to get on a roll again in Europe as it fires up. We have an incredible crop of 2-year-olds in the Northern Hemisphere and we obviously have some great horses currently running. Obviously you always hope for the best, but this is a game that is tough and we are hitting on all cylinders right now and doing really well, so we couldn't be more thankful.”