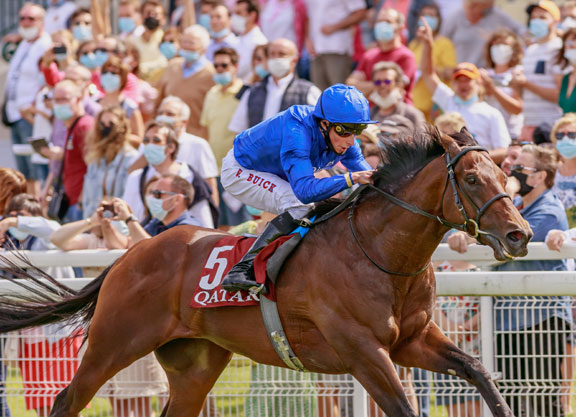 Last year’s champion 2-year-old Pinatubo (Ire) (Shamardal-Lava Flow {Ire}, by Dalakhani {Ire}) has been retired from racing and will stand next year at Darley’s Dalham Hall Stud in Newmarket.

Pinatubo was rated the best European 2-year-old in a quarter century last year off an unbeaten six-race campaign for owner/breeder Sheikh Mohammed and trainer Charlie Appleby that culminated with wins in the G1 Goffs Vincent O’Brien National S.-by nine lengths–and the G1 Darley Dewhurst S., and had earlier included scores in Royal Ascot’s Listed Chesham S. and Glorious Goodwood’s G2 Qatar Vintage S. Kicking off his 3-year-old campaign with a third in the G1 Qipco 2000 Guineas and a second in the G1 St James’s Palace S., Pinatubo dropped back down to seven furlongs to win the G1 Prix Jean Prat before finishing second to Persian King (GB) (Kingman {GB}) in the G1 Prix du Moulin de Longchamp.

Pinatubo is a second generation homebred for Godolphin, which campaigned both the sire and dam. Lava Flow won the Listed Prix de la Seine and is herself a daughter of the stakes-winning Mount Elbrus (GB) (Barathea {Ire}), who also wore the Godolphin blue. The third dam, El Jazirah (GB) (Kris {GB}), is a full-sister to the G1 Prix de Diane victress Rafha (GB), so this is the prolific sire-producing family of Invincible Spirit (Ire) and Kodiac (GB) as well as the very promising first-season sire Pride Of Dubai (Aus) (Street Cry {Ire}).

Sam Bullard, Darley’s director of stallions, said, “We are absolutely thrilled to welcome a horse as exceptional as Pinatubo to the roster at Dalham Hall Stud. Last year he carried all before him, most notably in the National S. which as we all know was a performance that cannot be matched by any other 2-year-old in the last quarter of a century. We were delighted to see him add a third Group 1 win to his superb record in the Prix Jean Prat and now look forward to him beginning his new career, where we’re confident he can continue Shamardal’s great legacy.”