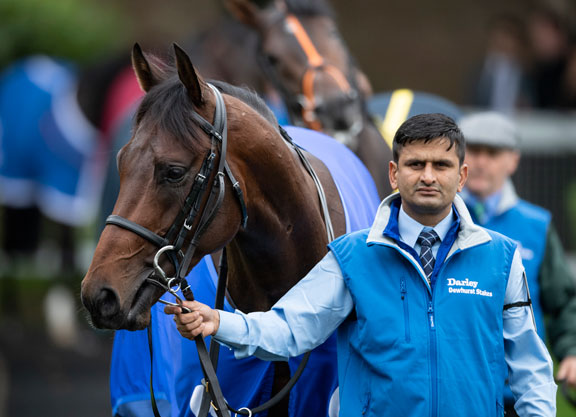 Saturday is another big day in the life of Charlie Appleby, but the captain of Moulton Paddocks is approaching the G1 QIPCO 2000 Guineas with an infectious enthusiasm as the imperturbable Pinatubo (Ire) (Shamardal) makes the short journey to the other side of Newmarket for his first 3-year-old examination. Last year's imperious G1 Vincent O'Brien National S. and G1 Dewhurst S. winner knows nothing of the heavy weight of expectation on him and his pilot William Buick and is mentally well-equipped to handle any surrounding nervous energy. Having made it through a diverse and challenging juvenile campaign with an unbeaten record marked by consistent deadly delivery, a winter and spring of training without hiccup and a month's delay imposed by the COVID-19 disaster, he has just 14 peers and the unforgiving Rowley Mile strip to master now.

In terms of achievement, Pinatubo's 2019 season puts him in elevated territory as the best-rated 2-year-old champion since Celtic Swing (GB) in 1994, but the lesson of that past luminary is that nothing can be taken for granted where this Newmarket Classic is concerned. It has been 238 days since the homebred confirmed his premier status by turning back Ballydoyle's Arizona (Ire) (No Nay Never) and Wichita (Ire) (No Nay Never) in a rain-afflicted Dewhurst here and it is that lengthy timespan that has so often proven the enemy of returning champions. Celtic Swing's eclipse in 1995 was followed three years later by the heavy reversal suffered by Xaar (GB), a 2-year-old talent comparable with Pinatubo, while in the intervening period there have been only five generation leaders who have emerged successful in this.

Appleby is in bullish mood as the first British Classic looms for an operation already off the mark in a European Guineas. “It is a focal point for Godolphin and, what an important occasion it will be for Pinatubo, who was rated the best two-year-old in 25 years but now has to show he has gone on where he left off last October,” he said. “I am optimistic he will do that on Saturday. He has continued to please me in every way. He continues to do well and I am confident he is ready to win a Classic. He has a wonderful unbeaten record to retain, and I believe he has both the mind and physical attributes to pull it off.”

There were no flies on Pinatubo last year and with nothing to suggest he has lost any of his natural alacrity during the off-season, opponents will be hoping for a tactical advantage. This is one Classic that has made high-class horses hostages to fortune due to the vagaries of the field size and draw combination. Since that famous field-split that may or may not have cost Hawk Wing in 2002, there have been five other renewals which have seen similar divisions and last year's renewal was a particularly notable example with the high-drawn stand's side group dominating. Housed in stall seven, Pinatubo has Ballydoyle's potential pacemaker New World Tapestry (War Front) alongside in eight and another who has shown early speed in Kenzai Warrior (Karakontie {Jpn}) in six.

Appleby is not letting post position weigh on his mind, however. “Pinatubo's draw is absolutely ideal,” he commented. “He is right in the middle in a 15-runner field, which means William Buick will have options when it comes to deciding where to position the colt in the first couple of furlongs. On ratings, he is the best horse and he is the type you can put where you like in a race and that is knowledge that helps build confidence. We will study the opposition, as you would before any Classic, but William knows he can ride his own race.” Buick was content on Thursday that there is a level playing field for this year's edition. “The ground is fast and the track is fair, so I don't think there's a bias,” he stated.

Whether the field will split may depend on the course of action that Oisin Murphy opts for on the widest-drawn Kameko (Kitten's Joy), Qatar Racing's clear-cut G1 Vertem Futurity hero. If he heads for the stand's rail, where he ended up on the operation's Roaring Lion (Kitten's Joy) two years ago, that could prove profitable. “We're really pleased with the horse, he's healthy and very well–I have Arizona in 13 with pace on both sides from the Ballydoyle contingent, so I'm very happy,” Murphy said.

Of those positioned towards the other extremity, Godolphin's pair of understudies Military March (GB) (New Approach {Ire}) and Al Suhail (GB) (Dubawi {Ire}) add another dimension to an intriguing renewal. They were first and second in that order in the course-and-distance G3 Autumn S. that proved such a vital pointer to last year's edition. While Military March's pedigree points more to the Derby than the Guineas, the son of Punctilious (GB) (Danehill) is giving his trainer some exciting signals and it is possible he has been under-rated with all the attention on the team's leading protagonist. “We gave him a break over the winter and have been very pleased with him since he came back in,” said trainer Saeed bin Suroor. “I was very happy with his final piece of work earlier this week and he looks ready to go. It looks as though he is a horse who will need further, but he shows plenty of speed and this is a nice starting point for his season. He looks much stronger compared to last year and I'm hoping for a big run.”

In a perfect world, Charlie Appleby will be hoping that Al Suhail is chasing home Pinatubo as the son of the G1 Epsom Oaks runner-up Shirocco Star (GB) (Shirocco {Ger}) preps for Epsom. “He is right up to Classic standard and I expect him to acquit himself well,” he said of the 1.1-million gns Tattersalls October Book 1 graduate who was also third in the G3 Solario S. at Sandown in August. “I am hoping James Doyle can get him into a nice galloping rhythm in the first half of the race and I expect him to be running on, doing his best work at the finish. He has an Epsom pedigree top and bottom.”

Beaten twice by Pinatubo last term, Arizona is back for another crack and the G2 Coventry S. winner has the fast ground his trainer believes will be vital to him. Despite being beaten more times than he won at two, he warrants respect as the leading contender for Aidan O'Brien who has trained a record 10 winners of this and the last three. “Arizona's been the horse on everyone's mind all along and everyone is happy with him,” the master of Ballydoyle commented. “He's in good form and everything has gone well with him. He's a big, rangy, scopey horse who we always thought would improve from two to three. He's by No Nay Never, who is an influence for speed, but he was always coming home well in his races last year and we always thought a mile was going to be well within his grasp.”

One live outsider is Rae and Carol Borras's Kenzai Warrior (Karakontie {Jpn}), who hails from the Roger Teal stable responsible for the 2018 runner-up Tip Two Win (GB) (Dark Angel {Ire}). Having made all to beat the subsequent G3 Zetland S. scorer Max Vega (Ire) (Lope de Vega {Ire}) in a mile novice at Salisbury in September, he ploughed through heavy ground to capture the re-routed seven-furlong G3 Horris Hill S. here in November. “I remember driving home that day and saying to my wife 'that's probably the closest we are ever going to get to winning the Guineas, but two years later here we are going in again, this time with a totally different animal,” Teal said. “Tip was a brave little horse with a great turn of foot, whereas this fellow is a big, powerful galloper who loves himself and is quite a character. They are very hard to compare, but both have class.

“We know what we are up against. Pinatubo is the highest-rated 2-year-old for ages–even higher than Frankel–and if he's trained on then he's going to be mighty hard to beat,” Teal added. “I know Andrew Balding is very keen on his horse [Kameko] and, of course, you can never rule out the Aidan O'Brien team. I was hoping they might not be allowed over but if we are going to win it, then we might as well beat the best! I feel he will be suited by a step up in trip but hopefully he can run well and then go for the Derby.”

Newmarket's card also features the G2 Betfair Dahlia Fillies' S., where Godolphin hold a strong hand courtesy of the John Gosden-trained G2 Prix de la Nonette winner Terebellum (Ire) (Sea the Stars {Ire}) and the Charlie Appleby-trained Magic Lily (GB) (New Approach {Ire}). The latter took the Jan. 16 G2 Cape Verdi and Feb. 13 G2 Balanchine before finishing second in the G1 Jebel Hatta on Super Saturday and may have a vital experience edge. “She posted two good efforts on this course as a juvenile and a mile and a quarter looks to be an ideal distance for her,” Appleby said. “If she can translate her Meydan form to Europe, she should be a major contender at this level.”

In France, the beautiful track at Lyon-Parilly deservedly gains some notable group-race action with Saint-Cloud shut for the time being. Its Classic trials, the G2 Prix Greffulhe and G3 Prix Cleopatre, precede the feature G2 Prix Corrida for older fillies and mares. Albert Frassetto, John D'Amato and Mike Pietrangelo's Grand Glory (GB) (Olympic Glory {Ire}) was returning from an absence when winning ParisLongchamp's Listed Prix Zarkava over 10 furlongs May 14 and proved there that her 2019 G1 Prix de Diane third was no fluke. In the Greffulhe, which is run over 11 furlongs this year, Corinna Baronin Von Ullmann's May 15 course-and-distance maiden winner In Swoop (Ire) (Adlerflug {Ger}) is an interesting contender taking on last year's G1 Criterium de Saint-Cloud hero Mkfancy (Fr) (Makfi {GB}) who has to put a disappointing effort when last in the G3 Prix la Force behind him. The Cleopatre is also staged over 11 furlongs and sees White Birch Farm's G3 Prix Vanteaux third Flighty Lady (Ire) (Sir Percy {GB}) taken on by a quartet including Sheikh Mohammed Obaid Al Maktoum's impressive May 19 Saint-Cloud debut scorer Camogie (Ire) (Invincible Spirit {Ire}).