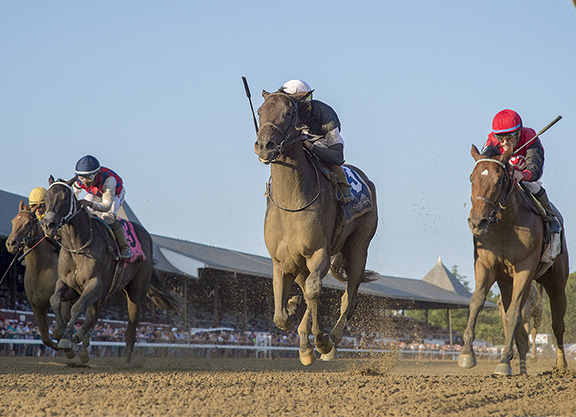 Tracy Farmer's Perfect Alibi, a beaten favorite last out, made amends in a big way when prevailing in a roughly-run renewal of the GII Adirondack S. Sunday at Saratoga.

An impressive first-out victress May 16 at Churchill when dusting a field of maidens by 9 1/2 lengths, the $220,000 Fasig-Tipton Saratoga pickup was shipped to Belmont for the June 6 Astoria S. and ran in spots before coming up three-quarters of a length short to debuting 'TDN Rising Star' Maryanorginger (Strong Mandate).

Let go as the distant third choice here behind 3-5 favorite Frank's Rockette, Perfect Alibi broke in good order and tracked from fourth in a bunched-up vanguard behind longshot Integral (Algorithms) through a :22.06 quarter. Remaining on hold while in traffic behind a :45.84 half, the dark bay found a seam in mid-stretch after several of the tiring frontrunners played bumper cars, and shot through the hole to challenge for the lead inside the eighth pole. Battling with slow-starting Magic Dance to her outside and the chalk to her inside, Perfect Alibi found just a little more in the closing strides to best the latter by a half-length. Magic Dance ran well to stay on for third, ahead of Miss Peppina.

“This filly is funny because in the morning when she breezes, you wouldn't know she's anything,” winning trainer Mark Casse said. “She'll go a half [mile] in 50 [seconds] and it's like she's giving you everything. I was a little surprised she broke her maiden the way she did so easy. I told Mr. Farmer, 'I can't tell you not to run her, I can't tell you to run her.' She's a little bit like Sir Winston. When he gallops out, he shows you something. Good thing about Mr. Farmer is he's not afraid to lose. Sometimes, you have to run them. This is why you run them, because if you watched her train the past couple of weeks, you would think she wouldn't be any good.”

“I had a good trip. I broke running because she's that kind of filly. She has a nice stride,” added victorious rider Irad Ortiz, Jr. “I got a good position on the turn and I just had my hands down and relaxed. Turning for home, Asmussen's filly [Magic Dance] was on the outside, so I didn't want to make a premature move and try to get through because it looked like [jockey Ricardo] Santana had a lot of horse, so I just waited. They didn't keep a straight [path], so I got through in between the horses and she responded really well. Mark is the type of trainer that doesn't put too much pressure on you, so I just had to be patient and ride her with confidence. I think she's learning race by race. She's going to get better down the road.”

Perfect Alibi is the 67th stakes winner and 25th graded stakes winner for Sky Mesa. She is the fifth foal to race out of SW No Use Denying, who produced a filly by Flatter Feb. 3 before being bred to Carpe Diem. Second dam Rumors Are Flying is a half-sister to GISW Missed the Storm (Storm Cat) and MGSW Green Means Go (Green Dancer), while third dam Missed the Wedding is a half to champion Chris Evert (Swoon's Son).