Performer Seeks Grade I Glory in the Carter 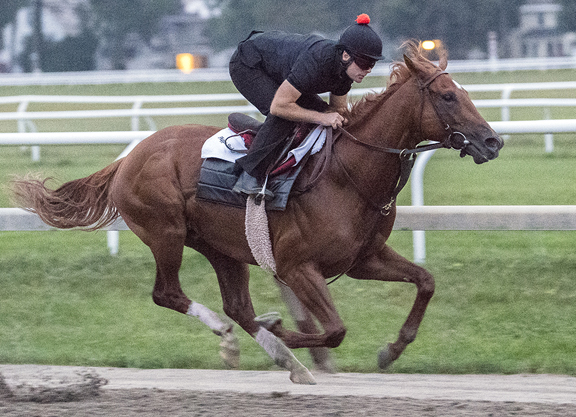 After Shug McGaughey saddles the likely favorite Code of Honor (Noble Mission {GB}) in the GIII Westchester S. Saturday, he will send out on of the top choices in Belmont’s GI Runhapppy Carter H. in the talented Performer (Speightstown). The Carter is typically run in April at Aqueduct, but was rescheduled and relocated due to the COVID-19 racing shutdown. It is a “Win and You’re In” qualifier for the GI Breeders’ Cup Sprint.

Graduating at second asking going six panels at this oval last June, Performer followed suit with an allowance win sprinting at Saratoga in August. The chestnut captured a Belmont optional claimer when extended to 1 1/16 miles in September and followed suit with a victory in the nine-panel GIII Discovery S. at Aqueduct Nov. 30.

“He had a very good winter. All of his works were good at Payson and all have been good here,” McGaughey told the NYRA media team. “He schooled in the paddock today and was very good. We’re looking forward to getting him started. He’s gotten bigger and stronger. If we can get a good, solid effort out of him and move ahead, we’ll be happy. He had four solid races last year and I think it got him to this year in good position.”

The Phipps Stable and Claiborne Farm runner will not have it easy in his first Grade I attempt. He will face a Grade I winner who is also entering on a win streak in Firenze Fire (Poseidon’s Warrior). Victorious in the 2017 GI Champagne S., the Mr Amore Stable homebred romped in the Fabulous Strike S. at Penn National Nov. 27 and bested his former stablemate Happy Farm (Ghostzapper) by a head in Aqueduct’s Gravesend S. Dec. 22. Last seen taking the GIII General George S. at Laurel by four lengths Feb. 15, Firenze Fire has since been transferred to Kelly Breen following the federal indictment of his former conditioner Jason Servis. The bay had been working well for his new barn, including a five-panel bullet in 1:00 2/5 (1/29) two back on the Belmont training track May 21.

“Mind Control is doing well and training lights out,” said Sacco. “He’s had about nine works since the Tom Fool. The last work was super. He has two races under his belt this year and he’s a very fit animal. He worked Saturday in 1:01.1 and galloped out in 1:12.4, which was exactly what we wanted. We wanted him to finish strong and he did.”