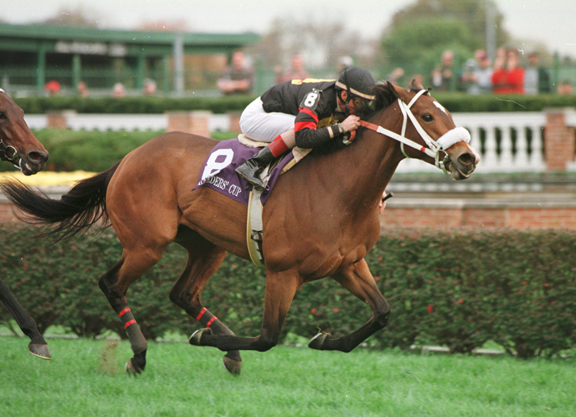 Last year, the race was run over Belmont's turf and won by Uni (GB) (More Than Ready), who would go on to claim the GI Breeders' Cup Mile and become the 2019 Champion Turf Female.

The race's namesake collected similar accolades over her four-year career two decades ago. Perfect Sting (Red Ransom) received an Eclipse Award in 2000 for Champion Grass Mare after she took the second running of the GI Breeders' Cup Filly and Mare Turf. The Adena Springs homebred then had a successful career as a broodmare and was recently retired after producing a filly by Awesome Again last year.

Raced by Stronach Stables, Perfect Sting was a stakes winner by her third start as a juvenile and a three-time graded stakes winner as a sophomore, including consecutive Grade I victories in the Garden City Breeders' Cup H. and the Queen Elizabeth II Challenge Cup S.

During her four-year-old campaign under trainer Joe Orseno, she never finished worse than second, claiming five graded stakes including the GII Diana H. at Saratoga and later her Breeders' Cup victory.

“Perfect Sting was always a consistent filly,” said Adena Springs' Farm Manager Donald Wells. “I think a lot of that came from her temperament. The Roberto-line horses can sometimes be a little hotter, but she seemed to be a really smart and genuine horse and she always showed up. Horses that have good minds are able to do that. From top to bottom, her racing career was really solid, and spectacular at times.”

The bay mare raced twice at five, chalking up another win in the GII Black Helen H. at Hialeah Park before returning to Adena Springs to begin her broodmare career.

Perfect Sting has since produced 13 foals, seven of which are winners. Her second foal Perfect Bullet (El Prado {Ire}) became a graded stakes-placed Adena Springs sire, and her daughter Smart Sting (Smart Strike) was a Grade III winner who is now also a  broodmare at Adena Springs. Two of her daughters, Purple Trillium (Seeking the Gold) and Peggy May (Lemon Drop Kid) are stakes producers.

“Perfect Sting was bred to several Mr. Prospector-line stallions,” Wells said. “The Roberto line has done well with Mr. Prospector, and several of her foals are now producers.”

Last year, the mare produced her final foal, a filly by Adena Springs' cornerstone sire Awesome Again (Deputy Minister), who has since been pensioned from stud duty.

“The yearling is really typical of Awesome Again,” Wells said. “A nice, balanced horse, compact with a nice hip and shoulder. She probably has her mom's shoulder as much as anything. We're really excited that we were able to get a filly as Perfect Sting's last foal and from the last crop of Awesome Again.”

The development of this yearling filly comes full circle as both Perfect Sting and Awesome Again were bred and raised by Frank Stronach and are now retired from their breeding careers.

“Hopefully there will be a great last swan song,” Wells said. “We couldn't be any happier about her joining the racing stable next year. She's probably just as good as any foal that Perfect Sting has had and she did it at the age of 23. That's a testament to the type of horse she is.”

Wells remarked that Perfect Sting was one of the best broodmares he has worked with.

“As a mother, she was a disciplinarian,” he said. “She wasn't a mean mare, but she didn't take any flack from her foals. She always kept them in line and treated them well, but she never let them take advantage of her. I always respected her for that. I think that's probably why she has been successful as a broodmare.”

The 24-year-old mare is now relishing the laid-back lifestyle of a retiree.

“She's a lovely mare to be around,” Wells said. “She still looks like the queen that she's always been and she enjoys life now. She was a good broodmare and she's going to be a good retired mare. We're happy to take care of her every day and love her like many racing fans did.”

For much of the team at Adena Springs, Perfect Sting has represented a culmination of a lifetime in the industry. Broodmare foreman Homero Betancourt was with the champion before her racing career began and now oversees her daily care as a retiree two decades later.

“We all feel fortunate to have been around Perfect Sting,” Wells said. “She's touched a lot of people over the years with how good a racehorse she was, and how good of a mother she was. We have five of her daughters to produce on, and we really believe in the family. It's been a joy to watch them grow and see how they've developed. We have a lot of confidence in the family and we expect that there's going to be a lot more to come.”