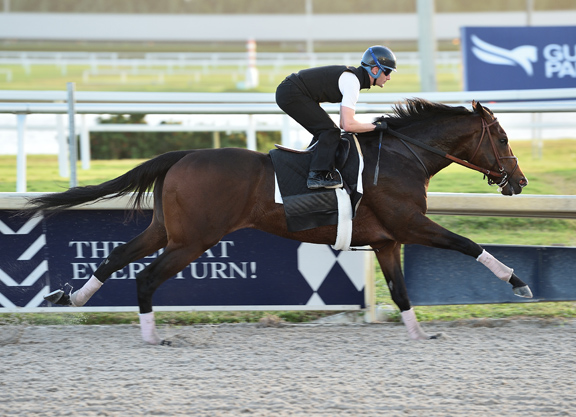 Headlining Saturday's main track event, Fox Hill Farm's Omaha Beach (War Front) drew post five in the field of 12, much to the satisfaction of Richard Mandella. He was installed the 7-5 favorite for the nine-furlong race.

“Couldn't ask for a better post,” Mandella said. “We're in the middle of the field, so we have nothing to complain about.”
Customarily settled just off the pace in the early going of his races, Mandella was confident the colt's pilot, Mike Smith, would carve out an appropriate trip.

“That's going to be left up to Mike Smith,” he said. “He's got plenty of speed to do whatever you want. Mike will probably let him run out of there and see what a couple of those horses on the outside do.

The imposing bay won five of seven starts in 2019, including the GI Arkansas Derby, the GI Santa Anita Sprint Championship and most recently, the GI Malibu S. at Santa Anita Dec. 28. He also finished runner-up in the GI Breeders' Cup Dirt Mile in November.

“He's gotten bigger and stronger as the year has gone by,” said Mandella. “He's always had a great mindset for racing , he's learned when to fight and when not to. He's one of the smartest horses I've ever had. I just wish we had a couple more years to keep going.”

“He's ready, I didn't need to do much with him coming into this,” said Guerrero.

In regards to race tactics, he added, “Omaha Beach comes from off the pace a little bit, so we're going to lay second or third. But he can also be in front. As long as he is comfortable, I'm OK with that. Omaha Beach is a very nice horse and I think he's just coming into his own, so even though I already beat him, he's probably the one to beat. I also think Mucho Gusto has a chance too.”

Javier Castellano is slated to ride Spun to Run Saturday.

Mucho Gusto (Mucho Macho Man), making his first start for HH Prince Faisal bin Kalid, drew the 10-hole for trainer Bob Baffert. Baffert won the inaugural running of the Pegasus with Arrogate in 2018. He was installed the 9-2 third choice on the morning line. Leading the fray in the 1 3/16-mile Turf is 7-2 morning line choice Magic Wand (Galileo {Ire}), winner of the G1 MacKinnon S. at Flemington in 2019. Campaigned by the Coolmore contingent, the 5-year-old mare, who finished runner-up behind Bricks and Mortar (Giant's Causeway) in last year's renewal, finished second in the G1 Longines Hong Kong Cup Dec. 8. last time out. The Aidan O'Brien trainee drew the widest of 12 contenders. After annexing last season's inaugural running with Bricks and Mortar, the Chad Brown is represented by Instilled Regard (Arch), Without Parole (GB) (Frankel {GB}), and Sacred Life (Fr) (Siyouni {Fr}). Winner of the Dec. 14 GI Ft. Lauderdale S. last time, Instilled Regard was assigned post six and 10-1 odds on the morning line. Without Parole, winner of the G1 St. James's Palace S., drew post three, while Group 3 victor Sacred Life will exit stall 11. On the morning line, the latter two were given 4-1 and 12-1 odds, respectively.

Hosted by Acacia Courtney and Jason Blewitt, Wednesday's draw also featured The Stronach Group's Chairman and President Belinda Stronach, who addressed some of the changes instituted for this year's Pegasus races.

“I also wanted to extend an apology to the owners and trainers because we announced late that Pegasus would be medication free and that was not our intention to do so,” she said. “But, as we are always thinking how we can evolve and create new opportunities for horsemen and pointing to the future in respect to medication-free races, we put our heads together and we decided this was the year we wished to do it. So, I thank you all for your support and running with us. We're making history together.”