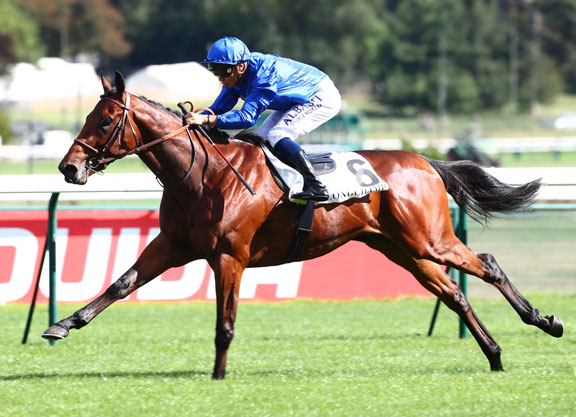 It isn't just the common law legal system which likes a precedent. Breeders love one too, to the extent that many prefer to have the reassurance that a mating represents a proven nick. However, when it comes to close inbreeding, such reassurance isn't usually there to be found. Consequently, it was a bold move on behalf of Gestut Ammerland when Machiavellian's granddaughter Lady Vettori was sent to Shamardal in his first season, as Machiavellian also sired Shamardal's dam Helsinki.

This 3 x 3 inbreeding to Machiavellian may have been a bit radical, but made good theoretical sense, as he had been the best two-year-old of 1989 by a sizeable margin and he had the best of bloodlines. By one of America's legendary stallions in Mr. Prospector, Machiavellian had a half-sister to the truly extraordinary Northern Dancer as his second dam. As if that weren't enough, Machiavellian was a brother to another champion 2-year-old in Coup de Genie and their dam Coup de Folie had a third Group 1 winner to her credit in Exit To Nowhere.

Needless to say, the mating between Lady Vettori and Shamardal worked extremely well, resulting in Lope de Vega. A winner of his first two juvenile starts, Lope de Vega proceeded to win both the G1 Poule d'Essai des Poulains and the G1 Prix du Jockey-Club in 2010. The pairing also worked pretty well when the mating was repeated four years later, producing the very useful listed winner Lord of the Land.

Lope de Vega's Classic successes in 2010 set an attractive precedent, which didn't go unnoticed at Darley. They too had a mare by a son of Machiavellian, this being Street Cry's daughter Lura. Although Lura had carried the Godolphin colours only once, she was a well-connected individual who had cost $725,000 as a yearling.

But Lura wouldn't create 3 x 3 inbreeding only to Machiavellian. Her sire Street Cry was a brother to Shamardal's dam Helsinki, so sending Lura to Shamardal would also produce 3 x 3 inbreeding to Helen Street. As close inbreeding is likely to reinforce not only a horse's virtues but also its flaws, the subject needs to have shown itself superior in every way.

Helen Street had certainly done that. Only Oh So Sharp, future winner of the 1000 Guineas, Oaks and St Leger, managed to beat Helen Street in her three juvenile starts, which also featured a wide-margin success in the G3 Prix du Calvados. The Ballymacoll homebred was also a clear-cut winner of the G1 Irish Oaks. The big and rangy Helen Street was one of only 125 foals sired by the magnificent Troy, whose early death tends to make him something of a forgotten hero. Defeated only once in seven 3-year-old starts, he won the Derby by seven lengths, the Irish Derby by four and then the King George and the Benson & Hedges Gold Cup (Juddmonte International).

Conformation also has to be taken into account when arranging any mating, and here Darley must have been confident that combining Shamardal with Street Cry was potentially a good thing. Back in 2008, before Shamardal had had any runners, Darley's advertising campaign for this champion son of Giant's Causeway made a point of highlighting Shamardal's relationship to Street Cry. And if I remember correctly, the campaign also drew attention to the physical similarities between Shamardal and Street Cry.

The mating went ahead in 2011 and the resultant filly, Lucida, went quite close to becoming a Classic winner. Beaten only a neck in the G1 Moyglare Stud S., she then won the G2 Rockfel S.  It was a measure of her toughness that her first four starts came in the space of less than eight weeks, which is a reminder that Shamardal once reeled off three Group 1 victories in the space of a month.

Lucida trained on well enough to finish second to Legatissimo, beaten three-parts of a length, in the 1000 Guineas and she was beaten a similar margin when third to those first-rate fillies Ervedya and Found in the G1 Coronation S.  With her combination of pedigree and performance, Lucida should make a first-rate broodmare, so make a note of her first foal, a 2018 colt by Dubawi.

Darley had also been encouraged to send Helen Street's granddaughter Antiquities to Shamardal in 2012. This time, though, the close inbreeding failed to pay off, with the resultant colt, Ancient History, showing only fairly useful form in France before being transferred to Australia. However, Lucida's exploits in 2014 and '15 no doubt persuaded the Godolphin team to give Antiquities a second chance with Shamardal in 2016. This time the pairing has worked much better, as the resultant foal, Victor Ludorum, maintained his unbeaten record in landing the G1 Prix Jean-Luc Lagardere two days ago.

As always, it is possible to attribute too much significance to inbreeding in a pedigree and it must be pointed out that neither Pinatubo nor Earthlight, the other Group 1 winners in Shamardal's exceptional 2017 crop, have any close inbreeding in their pedigrees.

Maybe Shamardal is simply an extraordinary stallion who doesn't need much help. However, Lucida and Victor Ludorum make a compelling argument that there is something to be gained from close inbreeding to Helen Street, while Lope de Vega and Lucida make a similar case for Machiavellian. Shamardal also has another black-type winner inbred to Helen Street in Shamtee, whose second dam is Helen Street's fairly useful daughter Grecian Slipper. Shamtee was winning her third consecutive race when she landed the Prix Finlande last year, when she was also a creditable fourth in the G2 Prix de Sandringham.

Victor Ludorum is the second good winner produced by Antiquities, his predecessor being Mary Tudor, a Dawn Approach filly with no duplications in her first four generations. Mary Tudor excelled herself when third behind Sea of Class and Forever Together in last year's G1 Irish Oaks.

Antiquities's sire Kaldounevees isn't exactly a household name. Something of a late maturer, he gained Group 3 successes in the Prix Edmond Blanc and Prix du Chemin de Fer du Nord over a mile as a 4-year-old. He then stepped up in distance to finish second in Group 1 events in Germany and the U.S., with his American defeat coming in the Man O'War S. over 1 3/8 miles.

He burst onto the scene as a stallion in the early noughties, thanks to the exploits of his daughter Terre A Terre and his son Ange Gabriel. Terre A Terre became a Group 1 winner in the 2001 Prix de l'Opera and then collected $1.2 million for her victory over Noverre in the G1 Dubai Duty Free. Ange Gabriel, for his part, won the Grand Prix de Saint-Cloud and Hong Kong Vase in 2002, before repeating his Saint-Cloud success in 2003.

The exploits of these cheaply-produced Group 1 winners provided the impetus for Darley to send Helen Street's listed-winning daughter Historian to Kaldounevees in 2004. Their daughter Antiquities was talented at around a mile and a quarter, so Victor Ludorum should have no stamina problems if he attempts to follow in the footsteps of Shamardal and Lope de Vega in the Prix du Jockey-Club. He is the third Group 1 winner out of a Kaldounevees mare, following the Melbourne Cup winner Dunaden and the Prix Jean Romanet winner Nonza.