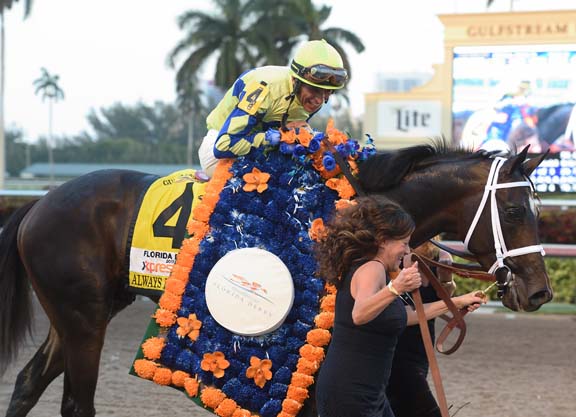 A couple of weeks ago, I had my fingers firmly crossed that American Anthem would win the GII Rebel S. No, it wasn't my money which had helped this promising colt start a warm favorite. I simply wanted an opportunity to report that his sire, Bodemeister, was on the verge of justifying some of the hype generated by the popularity of his sales progeny.

Unfortunately, American Anthem trailed home only tenth of 11, but–as the French proverb states–all things come to those who wait. Another opportunity has presented itself following the impressive victory of Bodemeister's son Always Dreaming in the GI Florida Derby–a race once won even more impressively by Bodemeister's sire Empire Maker en route to his second place in the GI Kentucky Derby and victory in the GI Belmont S.

Bodemeister, of course, had also turned one of the main Derby trials into a rout, leaving Secret Circle trailing by nearly ten lengths in the GI Arkansas Derby. The free-running Bodemeister also emerged with tremendous credit when runner-up to I'll Have Another in the first two legs of the 2012 Triple Crown, his neck defeat in the Preakness being particularly cruel. Just as cruel was the news in the summer that Bodemeister was forced to be retired after only six starts, because nerve damage in a shoulder had scotched hopes of winning the GI Breeders' Cup Classic.

In addition to his memorable efforts on the track, which included setting fractions of :45.2 and 1:09.8 in the Kentucky Derby, Bodemeister had quite a few other things going for him when he retired to WinStar Farm. For a start, he wasn't going to have to compete against his sire, as Empire Maker had been sold to Japan in November 2010. And although Bodemeister hadn't raced at two, his dam Untouched Talent had been a Grade III-winning juvenile by Storm Cat, a multiple champion sire of 2-year-olds.

Then there's his female line. He comes from an unbroken line of talented racemares, all sired by top stallions. His first five dams are black-type performers by Storm Cat, A.P. Indy, Roberto, Nijinsky and Habitat–the Habitat mare being the very speedy Bitty Girl, who remained unbeaten in her first five starts as a two-year-old. Bodemeister's eight lines of La Troienne was also likely to appeal to breeders.

His best efforts last year were Royal Copy's narrow defeat by Practical Joke in the GI Hopeful S. and Bode's Dream's black-type successes. There was good reason, though, for predicting an upturn in Bodemeister's fortunes. As I said earlier, he didn't race at two. His sire Empire Maker was another who didn't reveal the full extent of his talents until he was three, with his promising juvenile efforts being rated no higher than 106 on the Experimental Free H.

The broodmare sires of Bodemeister's highest-priced progeny included Smart Strike, Distorted Humor, Awesome Again and Speightstown, who collectively managed one juvenile start between them, so a bit of patience was likely to be required. Sure enough, the 3-year-old winners have begun to flow and his year's total of five black-type horses makes him joint-top with To Honor And Serve among the second-crop sires.

Always Dreaming complies with this progressive profile. Although placed in both his juvenile starts, it wasn't until Jan. 25, after a five-month absence, that this $350,000 Keeneland purchase began to look like a colt with a future. Now a three-time winner, by margins of 11 1/2 lengths, four lengths and five lengths, he could well provide the Unbridled male line another Kentucky Derby success.

According to Racing Post ratings, Bodemeister is the best son of Empire Maker, with a rating of 126. This statement needs a little clarification, as it could be argued that Empire Maker is a more effective sire of fillies than colts. Nine of his 11 Grade I winners are fillies and so are six of his eight Grade II winners. A record like this might suggest that Empire Maker has far more to offer as a sire of broodmares than as a sire of sires.

The TDN's pedigree notes which accompanied the report on the Florida Derby stated that “Always Dreaming's California-bred dam Above Perfection was an exceptionally fast sprinter and posted a pair of Beyer Speed Figures north of 110–when runner-up to champion Xtra Heat in the 2001 GI Prioress S. (112) and when winning the GIII Las Flores H. (113) in 2002.”

This would normally raise a question about Above Perfection's ability to produce a potential Kentucky Derby winner– especially when her previous Grade I winner, the Spinaway S. winner Hot Dixie Chick, was a sprinter. However, there is some reassurance to be found in the fact that she is a daughter of In Excess, the ex-English colt whose victories included a record-setting win in the GI Suburban H. over a mile and a quarter. In Excess also sired Indian Charlie, the 1998 Kentucky Derby third who ranks as the grandsire of Nyquist, last year's Kentucky Derby winner.

Third dam Happening was by the admirably tough Terrang, a veteran of 66 races over five years. Terrang had the talent to match his toughness, as he showed with victories in the Santa Anita Derby and Santa Anita H. He stayed a mile and a quarter, so I am hopeful that Always Dreaming won't find the final sixteenth of the Derby as troublesome as Bodemeister did.