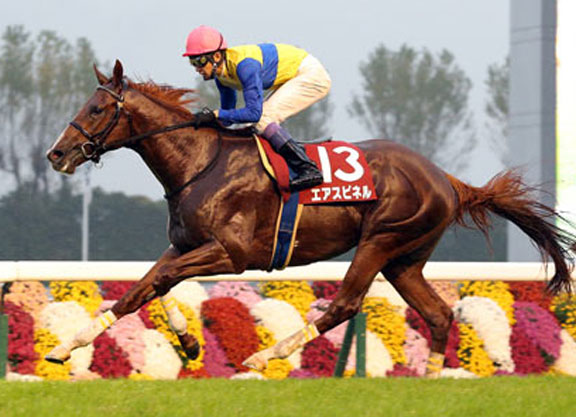 It is now nearly 250 years since the colourful gambler Dennis O'Kelly correctly predicted at Epsom that “it will be Eclipse first, the rest nowhere.” Perhaps using his winnings, O'Kelly went on to buy this brilliant horse, who retired unbeaten in 18 starts before developing into the ancestor of the vast majority of today's Thoroughbreds.

One could be forgiven for thinking that a similar situation currently prevails in the Japanese breeding industry, with the all-conquering force being the 2005 Japanese Triple Crown winner Deep Impact. The Japan Racing Horse Association published a list of fees for the stallions represented in its 2015 Select Sale, with Deep Impact's price given as ¥25,000,000 (around $200,000 at today's exchange rate). Only four other stallions were listed with fees higher than ¥5,000,000, these being King Kamehameha and Heart's Cry at ¥8,000,000 (around $65,000) and Stay Gold and his son Orfevre at ¥6,000,000. In other words, Deep Impact is more than three times the price of his nearest rivals. (Incidentally, Empire Maker, who returns to Kentucky at a fee of $100,000, was priced at ¥3,500,000).

Some of Japan's recent Group 1 events also reflect Deep Impact's dominance. The Tenno Sho (Autumn), which regularly attracts Japan's best performers, had nine of Deep Impact's progeny among its 18 contestants. The Kikura Sho–the final leg of the Triple Crown–had only three Deep Impacts, but the field also included two runners by his brother Black Tide, including the winner Kitasan Black. The Shuka Sho, which completes the Fillies' Triple Crown, had five Deep Impacts (and a Black Tide), with victory going to Deep Impact's Japanese Oaks winner Mikki Queen. Even the Sprinters S. over six furlongs attracted three Deep Impacts, two of which were beaten little more than a length.

It was the same old story two days ago, in the Queen Elizabeth II Cup at Kyoto. With four of the 18 runners to his credit, Deep Impact was responsible for first, third and fifth, with victory going to Marialite.

Thanks to Marialite's win, Deep Impact now has the magnificent total of 17 group winners to his credit in Japan this year, the others being Marialite's fellow Group 1 winner Mikki Queen, the Group 2 winners A Shin Hikari, Decipher, Lachesis, Satono Rasen, Shonan Pandora and Touching Speech and the Group 3 scorers Ambitious, the 2-year-old Blanc Bonheur, Candy Barows, D'Accord, Danon Platina, Passion Dance, Real Steel, Uliuli and Vincennes. He has also enjoyed Group 1 success in Australia, thanks to the George Ryder S. winner Real Impact. The consequence is that Deep Impact currently holds a lead of ¥800,000,000 (around $6,500,000) in his bid to land his fourth consecutive sires' championship.

I don't want to belittle Deep Impact's highly admirable achievement, but it is worth mentioning that the TDN's leading sires' table credits him with 433 starters, whereas Dubawi has 16 group stakes winners from 281 starters, Tapit has 16 from 307 and Galileo has a whopping 25 from 322.

Another stallion with a sizeable total of group stakes winners is King Kamehameha, the Japanese Derby (Tokyo Yushun) winner of 2004 who became champion sire in 2010 and 2011. When this son of Kingmambo recorded his second championship, he had nearly three times as many runners as the fourth-placed Deep Impact, who had started his stallion career two years later than his fellow Shadai stallion. Since then King Kamehameha has had to play second fiddle to Deep Impact, but he has again put up a good fight in 2015 (with the help of 522 starters).

King Kamehameha's tally of eight graded stakes winners may not compare to Deep Impact's 17, but he has often supplied the winner on the biggest occasions. His unappealingly named daughter Let's Go Donki landed the Japanese 1,000 Guineas (Oka Sho), and a week later his son Duramente completed a splendid Guineas double by taking the Satsuki Sho. Duramente then confirmed his standing as the year's top 3-year-old by adding the Derby (Tokyo Yushun). King Kamehameha's 4-year-old son Lovely Day has also staked a strong claim to the title of the year's top older horse with six group wins from eight starts, including Group 1 successes in the Takarazuka Kinen and the recent Tenno Sho.

Even if Duramente fails to make it back into action next year, King Kamehameha looks set to shine with Air Spinel, another young son who was impressive in taking the G2 Daily Hai Nisai S. three days ago. (Click for the Racing Post result or the free Equineline.com catalogue-style pedigree. Click for the JRA VIDEO.)

Air Spinel acts as a reminder that King Kamehameha–unlike many of the other leading stallions in Japan–is ideally placed to cover many of the accomplished daughters and granddaughters of the breed-shaping Sunday Silence.

Even though Sunday Silence died in 2002, his influence is still immense. Believe it or not, eight of the top 10 places on the current leading sires' list are occupied by sons of Sunday Silence, the only exceptions being second-ranked King Kamehameha and eighth-placed Kurofune. In these circumstances, it isn't so surprising that equineline credits King Kamehameha with no fewer than 377 foals of racing age out of 251 daughters of Sunday Silence.

Despite this near-total domination of the sires' table, the Sunday Silence clan still manages to make an impact on the broodmare sires' list, though nothing like as strong. Sunday Silence, with many more starters than any of his rivals, holds a very clear lead, with his sons Dance in The Dark and Fuji Kiseki in second and fifth places.

Air Spinel is out of a Sunday Silence mare, as are several other top winners by King Kamehameha, such as Duramente, the Japan Cup winner Rose Kingdom, the Japan Cup Dirt winner Belshazzar and the G2 winners Dia de la Madre, To The Glory, To The World and Solitary King. The high-class Lovely Day has a dam by Dance In The Dark, whereas Let's Go Donki has a dam by Marvelous Sunday.

Air Spinel has every right to develop into a Classic colt next year. His dam Air Messiah had an excellent record. At three she failed by only a neck to hold off Cesario in the Oaks over a mile and a half, with Cesario next running out a four-length winner of the GI American Oaks at Hollywood Park. Air Messiah later earned two fine wins over a mile and a quarter, notably defeating the very smart Rhein Kraft in the Shuka Sho. She also finished second in a couple of good races at four, over seven furlongs and a mile, so she was admirably versatile.

The quality extends to Air Spinel's second dam, Air Déjà Vu. A Group 3 winner, she was second in the Oaks and third in both the 1,000 Guineas and the Shuka Sho. Air Déjà Vu's sire Northern Taste could be described as the Sunday Silence of his time. This flashily marked son of Northern Dancer won the Prix de la Foret before helping the Yoshidas' Shadai operation develop into the powerhouse it is today. Northern Taste was champion sire 10 times in 11 years, compared to Sunday Silence's 13 consecutive championships.

Sunday Silence also enjoyed success with Air Spinel's third dam, the American import I Dreamed A Dream. Their son Air Shakur went very close to landing the Japanese Triple Crown in 2000. However, I Dreamed A Dream had won just two of her 22 starts in North America and it took only $57,000 to buy this daughter of Well Decorated in 1993.

So what was her appeal to the Japanese? The answer is that she comes from Darby Dan's outstanding Golden Trail family, her third dam being On The Trail. It was On The Trail's half-sister Kelley's Day who produced Brian's Time, the 1988 Florida Derby winner who sired the Japanese Derby winners Narita Brian, Sunny Brian and Tanino Gimlet. His first-crop son Narita Brian took the Triple Crown in 1994, just months after I Dreamed A Dream's arrival, and he also numbered Japan's top juvenile prize, the Asahi Hai Sansai S., among his four successes at two.