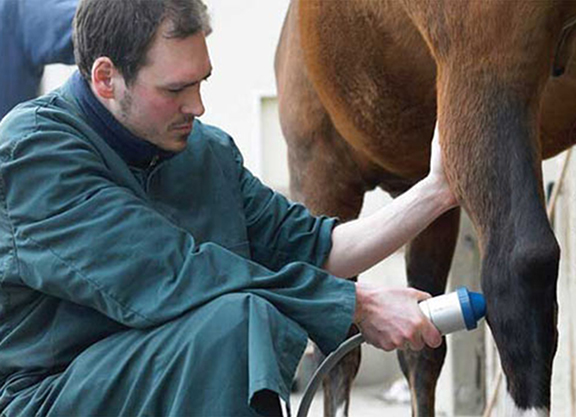 A horse being treated with shockwave therapy

The Delaware Thoroughbred Racing Commission (DTRC) has reversed a ruling issued in November and dropped all penalties that had been levied against trainer Anthony Pecoraro for alleged unauthorized use of a shockwave therapy machine. Pecoraro, who was originally suspended six months and fined $1,000, appealed the ruling and the matter was resolved Tuesday at a commission meeting.

The penalties originally accessed to owner David Neilson were reduced with the commission voting to reduce his one-year suspension to 30 days.

The case revolved around 5-year-old Glencairn, who suffered a catastrophic injury in a $5,000 claiming race run on Aug. 5 at Delaware Park. It was his first start after a six-month layoff and after he had competed in a $25,000 claimer at Aqueduct for trainer Gary Gullo. After an investigation, the DTRC alleged that Pecoraro and Neilson were in violation of rules regarding shockwave therapy, which do not allow use of the machines within 10 days of a race.

Pecoraro had maintained all along that he was unaware that the horse had been treated with a shockwave machine. Under the trainer responsibility rule, his lack of knowledge of the procedure would not normally be enough for him to be exonerated, but the Delaware Park stewards did not cite the trainer responsibility rule when making their original ruling. Though voting to dismiss the charges against Pecoraro, DTRC Chair Duncan Patterson made it clear that he felt Pecoraro got by on a technicality.

“The initial ruling did not have a trainer responsibility paragraph in it,” Patterson said. “It was left out. It was a screw up. The testimony indicated that he did not know of the shockwave therapy. Had the trainer responsibility rule been invoked in the original judgment, we would have found him guilty because he should have known what was being given at the farm where he had sent that horse. Because the ruling strictly focused on the shockwave therapy, which he didn't have anything to do personally with, there wasn't much we could do about it. We were disappointed.

Only three members of the five-member commission were there to vote and they voted 3-0 to drop the suspension. The appeal hearing was originally scheduled for April, but the DTRC decided to move it up to Tuesday.

“When this came out, the case may have been shocking, but when you got into the facts they had no case against Mr. Pecoraro,” said Pecoraro's attorney Drew Mollica. “They overcharged him with six months because they said he didn't report use of the shockwave machine. There was no evidence against Mr. Pecoraro that he used the machine and the commission had no choice but to dismiss. There was no evidence that he did anything wrong. They couldn't invoke the trainer responsibility rule because in the ruling they didn't cite it. You can't just throw in the trainer responsibility rule, you have to be charged with it in the first place.”

Because Pecoraro was granted a stay after the original ruling, he has continued to train. He is currently based at Gulfstream and is two for 13 at the current meet.

Attorney Alan Pincus, who represented Neilson, denied that the horse was treated with a shockwave machine within 10 days of the race. He said that the DTRC penalized his client because it found that the machine in question wasn't properly registered.

“This was a horse who had problems and there was an unfortunate result,” he said. “With hindsight, no one would have let the horse run. But we can't be put in a position that we guarantee that no horse will ever break down. That's the nature of racing. What happened, it was very unfortunate, but under circumstances of the case I don't think anybody really did anything wrong.”
Though Neilson was left with a 30-day suspension and a $1,000 fine, Pincus said he was pleased with the outcome of the case.

“This is a victory for us,” Pincus said. “I give high praise to the DTRC. When it comes to hearings, they are the finest commission in the country. They listen to the facts of the case and the commissioners, not a hearing examiner, hear the case. They put in the time, they listen, they ask questions and get to the bottom of things. I have nothing but high praise for them.”