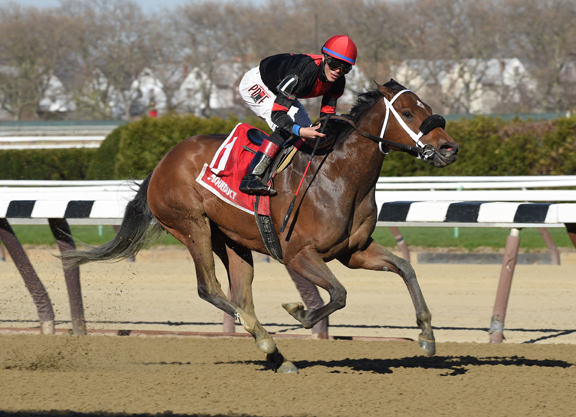 Vincent S. Scuderi's homebred Paulassilverlining has always been known for her consistency, and continues to build her resume after a convincing open-length score in the Sunday feature at Aqueduct–the second graded win of her career.

Winner of the GII Matron S. as a 2-year-old, the bay kicked off her sophomore season with a success in the Ruthless S. in January. Winless in four honest stakes tries during the remainder of 2015, she returned with a flashy 9 1/4-length tally in a six-panel optional claimer over the inner track Feb. 11. She recently completed the exacta behind Clothes Fall Off (Daaher) in the Correction S. over that same trip, and was sent off as the second choice behind GISW Cavorting in Sunday's Distaff.

Away in good order from the rail, Paulassilverlining took back to track longshot Madam Aamoura (Zensational) from second through a quarter-mile in :22.93. Joined to her outside by Bar of Gold, Paulassilverlining quickly angled off the rail, collared the pacesetter cornering for home and kicked clear to notch a never-in-doubt score despite drifting out a bit in deep stretch.

“She's been training so well and in her last couple of runs, she's turned up every time,” commented winning trainer Michelle Nevin. “She's really coming along. Paula's run well going six, seven, a mile. She always tries, always shows up. She's really improved over the last couple of months. We're heading the right way. She's been doing so good, we were expecting a big run from her. But Cavorting is nice too–actually there were a couple of really nice fillies in here, so she had to show up and she did.”

Cavorting, the even-money choice, was buried in traffic down the backstretch and offered a mild rail rally to secure place honors.

The winner is a half-sister to fellow Scuderi homebred Dads Caps, who captured the GI Carter H. in 2014 and 2015, and finished third in this year's running Apr. 9. Seeking the Silver is also responsible for the 3-year-old colt Vincento (Include), the unraced juvenile colt Dwizard (Macho Uno) and a weanling full-sister to Paulassilverlining.