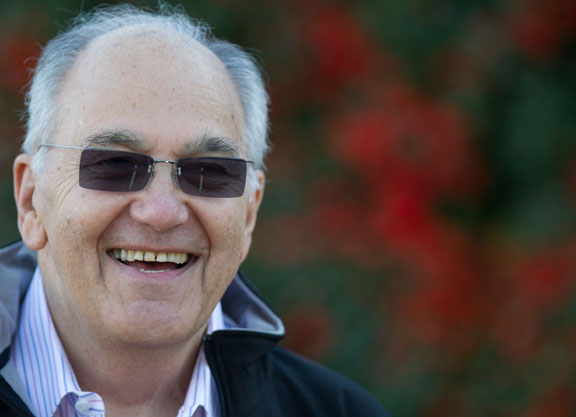 Australian-born Makin first made his mark on the sport in the closing decades of the 20th century as a punter, focusing his formidable intellect and computer skills, allied to his first-class judgement of both horses and races, on the colossal Tote pools in Hong Kong (and to a lesser extent in Japan) to amass a fortune. He was thus able to invest in the bloodstock market and again he hit the jackpot, unearthing a stream of special horses and enjoying top-level success as both owner and breeder.

The horse with whom Makin will be forever associated is the mighty Starcraft (NZ) (Soviet Star), whom he bought as a yearling in New Zealand for $NZ 80,000 before master-minding an adventurous career which made the magnificent chestnut a champion in both hemispheres. Trained on the Gold Coast by Gary Newham, Starcraft proved himself the champion 3-year-old of Australia in 2004 thanks to his excellent victory in the G1 Australian Derby at Randwick and his weight-for-age triumph in the G1 Chipping Norton S. at Warwick Farm. A weight-for-age Group 1 winner in New Zealand the following spring, Starcraft was then sent to Europe early in 2005. Trained there by Luca Cumani, he established himself as World Champion Older Turf Miler thanks to his wins in the G1 Prix du Moulin du Longchamp and G1 Queen Elizabeth S. at Newmarket. Starcraft subsequently established himself as a successful stallion at Arrowfield.

The other superstar to race in Makin's red, white and blue silks was Chicquita (Ire) (Montjeu {Ire}). The headstrong and sometimes wayward filly got her 3-year-old campaign off to a bad start in 2013 when veering off-course through a hedge and falling when seemingly set for victory in a conditions race at Saint-Cloud. Undaunted, Makin and her trainer Alain de Royer-Dupre stuck to their plan of running her in the G1 Prix de Diane, in which she belied her long odds to finish second to Treve (Fr) (Motivator {GB}). The following month Chicquita provided a rare example of a maiden winning a Classic when strolling home in the G1 Irish Oaks.

At the end of that year, Makin's colourful career in the sport took another turn when he offered his entire collection of racing and breeding stock in an unreserved dispersal at the Goffs November Sale. Makin had been accumulating a band of high-class broodmares including Authorized's dam Funsie (Fr) (Saumarez {GB}) and 2009 G1 July Cup heroine Fleeting Spirit (Ire) (Invincible Spirit {Ire}). The Paulyn Stud dispersal ranked as one of the notable events in modern bloodstock history, with Chicquita topping the bill at €6-million.

Needless to say, Makin's decision to retire from the game did not prove irreversible. A racing man to his boots, he could not resist the call of the turf and before long he was picking up the occasional tempting prospect including the impeccably bred La Figlia (Ire), a member of Frankel's first crop out of dual Guineas heroine Finsceal Beo (Ire) (Mr Greeley) whom he bought for €1.8-million as a foal at Goffs in 2015. Another horse whom he raced at the time was his homebred Sky Kingdom (Ire) (Montjeu {Ire}), who had been retained when the rest of the horses were sold. The son of the top-class Makin-bred Starcraft mare We Can Say It Now (Aus) (a dual Group 1 winner for Makin in New Zealand in 2010), Sky Kingdom won the Wood Ditton S. at Newmarket in 2016 and was subsequently send down to Australia, where his owner persuaded Gary Newham to come out of retirement to train him. Another horse whom he bred from We Can Say It Now was the winning Galileo filly Tranquil Star (Ire), who provided another reminder of Makin's love of racing heritage: she and Chicquita both share names with champions Australian racemares of yesteryear.

One of Makin's final projects was promoting 2015 G1 Racing Post Trophy winner Marcel (Ire) (Lawman {Fr}) as a stallion. On the horse's retirement to the National Stud in 2017, Makin explained his motivation for the project: “I'm an old guy and I tried to retire when I was 75 and now I'm five years older than that and I'm thinking to myself that I'm glad that I didn't retire as I nearly experienced depression. The legs might be weak but it's important to work harder as you get older and to keep your brain active.”

A colourful character whose love of the racing game shone brightly throughout his life, Makin added plenty to the sport in which he enjoyed so much success.