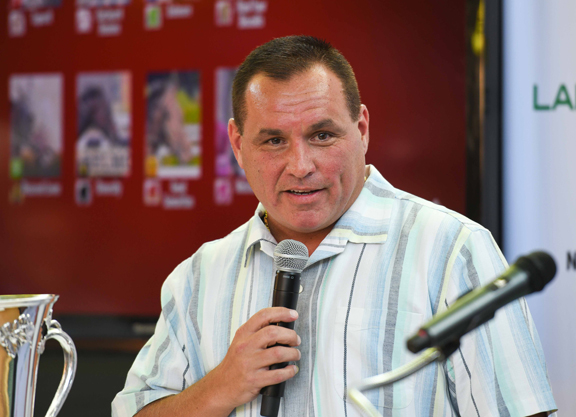 SARATOGA SPRINGS, New York–Hold on. Owner-breeder-horseplayer Ron Paolucci is reconsidering whether to leave the racing business.

Two weeks after announcing that he was very unhappy and planning to disband his stable, Paolucci, 48, said Tuesday night at the post-position draw for the GI Whitney S. that so many people have urged him not to leave, that he isn't so sure now about his move to quit the sport. He owns more than 150 horses, handled by trainers across the country, and his Loooch Racing was the second-leading owner in the U.S. last year with 159 victories. Loooch is running Dalmore (Colonel John), a 30-1 long shot, in the $1.2-million Whitney Saturday afternoon at Saratoga Race Course.

Saying “I'm never going to say never,” Paolucci said he was serious when he dropped the news that he would get out of racing. “What I didn't anticipate was how many people across the game reached out to me and said, 'we need you to stay in,'” he said.

“You don't see it when you're doing it until you say, 'Hey, I might get out.' Then people that you didn't even know were watching you are like, 'We need you in the game.'”

One of the early callers with that message, Paolucci said, was Hall of Fame trainer Bob Baffert. During a post-draw interview with NYRA host Andy Serling, Backyard Heaven (Tizway)'s owner Ken Ramsey said he spoke with Paolucci at the event.

“I saw Ron coming in and I had read in the paper where he was thinking about getting out of the business,” Ramsey said. “I used the old Shoeless Joe expression. I said, 'Tell me Looch, it's not true. Tell me it's not true.' I told him he needed to stay in. We need guys like him.”

In a July 19 TDN story, written by Bill Finley, Paolucci said he had been wavering on whether or not he should remain in the horse business for quite some time, and that a July 9 race at Thistledown was the breaking point. He ran an entry with Game Over (Mineshaft) as the much stronger half. At odds of 1-5, Game Over won by 1 3/4 lengths. But the stewards disqualified him, ruling that his entrymate Chromium (Vronsky) was ridden in a way to interfere with Game Over's competition. Chromium's rider Luis Rivera received a 30-day suspension.

“They questioned Luis dozens of times, kept asking him what did they tell you to do, how did they tell you to ride the race?” Paolucci said. “Game Over was 1-5. He didn't need any help. It was the most ridiculous thing I have ever heard. I think they gave Rivera 30 days because he didn't tell them what they wanted to hear. They wanted him to say that I cheated and set this up. I won't let anyone defame my name like that.”

At the Whitney draw, Paolucci said he stewed about the Thistledown incident for about 10 days before calling Marty McGee of Daily Racing Form to tell him he was leaving racing.

“Honestly, it wasn't even the DQ,” he said. “It was the combination of like 20 different things and the inference of what my riders' actions were. Getting put up and taken down is part of the game. I don't never argue that. I've been on the good side of some DQs. I got put up in a $2-million race [with Ria Antonia in the 2013 GI Breeders' Cup Juvenile Fillies]. DQs are part of the game. That doesn't bother me.”

Paolucci nodded in the direction of trainer Anthony Quartarolo, who was sitting at the table. “You've got to think about guys like him, my trainer, who only trains for me and all the people he employs and all these people could possibly be out of jobs,” Poalucci said. “So, you've got to really reconsider it after everything.”