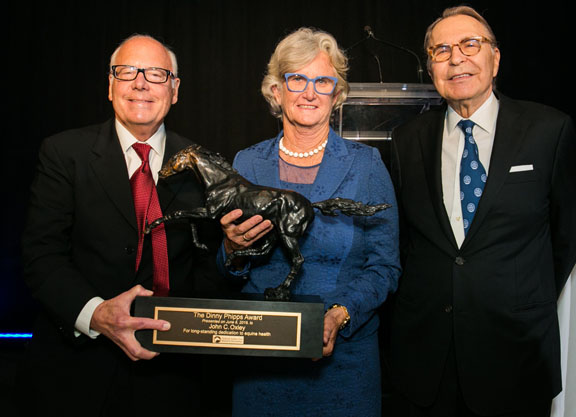 The Grayson-Jockey Club Research Foundation honored John C. “Jack” Oxley with the Dinny Phipps Award at The Jockey Club's 125th anniversary celebration Thursday, June 6, at The Sea Grill in New York City. A longtime Thoroughbred owner whose best horses have included 2001 GI Kentucky Derby winner Monarchos (Maria's Mon) and 1999 Eclipse Champion Older Female Beautiful Pleasure (Maudlin), Oxley has pledged percentages of his horses' earnings to Grayson over the years. He also created the Oxley Challenge in 2004, where he pledged to donate $1 million to Grayson in four years if Grayson raised an equal amount.

“I am most honored and feel very humbled in my acceptance of this year's Dinny Phipps Award,” said Oxley, who is a member of Grayson's board of directors. “There are so many who have contributed to the success of Grayson-Jockey Club, but first let's remember and celebrate a man who I believe has done more for racing and the Thoroughbred than any other, Mr. Dinny Phipps.”

Earle Mack, who has bred and owned Thoroughbreds for more than 55 years and has been on several boards as well as served as a former chairman of the New York State Racing Commission, created the Dinny Phipps Award in 2017 to honor an individual or individuals who are dedicated to equine health. Previous winners include the Phipps family and Frank Stronach. Mack was on hand to present Oxley with a bronze sculpture created by Odon Wagner Gallery and artist Gary Weisman.