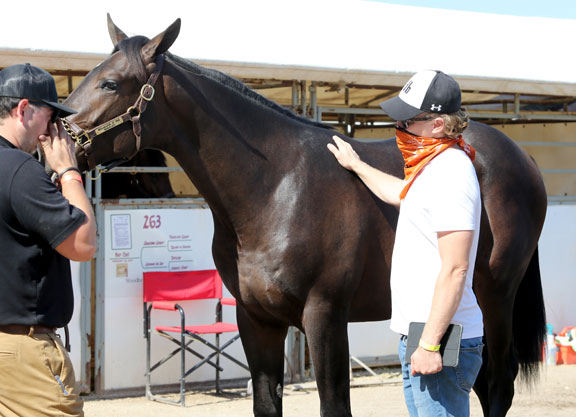 On Feb. 6, the Oxford-born Dan Blacker celebrated his first graded stakes win as a trainer when Hit The Road (More Than Ready) took Santa Anita's GIII Thunder Road S., unleashing a powerful turn of foot inside the final furlong to win by an eye-catching 3 3/4 lengths. The progressive 4-year-old now has his sights set on Grade I glory in the Frank E. Kilroe Mile over the same course and distance as the Thunder Road on Mar. 6, and a victory there would epitomize everything Blacker has been working toward since taking out his license 10 years ago.

Blacker, the son of acclaimed National Hunt jockey-turned equine sculptor Philip Blacker, dabbled in showjumping as a youngster and rode out for various trainers–including Richard Gibson, Jonathan Pease and the late steeplechase trainer Peter Monteith–while studying environmental geoscience at the University of Edinburgh. It was during this time that Blacker decided he wanted to be a trainer, but it was during his stint in America as part of Darley Flying Start, and in particular in the midst of the festivities surrounding the 2006 GI Kentucky Derby, that Blacker had a real epiphany: he wanted to be a trainer in America.

“The thing about starting up in the United States is that there is a unique opportunity here for young people and young trainers,” said the 38-year-old Blacker, who took out his license in 2011 after stints as an assistant to Richard Mandella and Tom Albertrani. “Back home it's really challenging for trainers to get started. You need a lot of financial backing. When I came to the States I just fell in love with it and loved California and the racetrack atmosphere, but there is a unique opportunity here for young trainers to get a foot in the door and get started that doesn't exist anywhere else. Here you can start with two horses, which I did, and I think it would be so hard to do that anywhere else. I asked the racing secretary at Hollywood Park, 'hey, can I get two stalls?' He said, 'sure, what are the names of the horses?' I gave him the names he said, 'alright, barn 52, next to [trainer Mike] Puype.' And away you went. I borrowed a saddle and a bridle and a groom-I literally had nothing. I had no money and was just rocking and rolling from the beginning and built it up from there. I went up to three horses but had one claimed so was back down to two, then three horses, four horses-you just build it up slowly.”

Blacker credited a few loyal owners for helping him build his stable up to 28 today, and his friend and former Flying Start classmate Craig “Boomer” Rounsefell for picking out Hit The Road at Keeneland. The horse was bought privately after failing to sell in the ring at $200,000.

“He was Hip 16 of Book 1, and it's a funny story; I typically hadn't been to Book 1 for a few years before that, just because it's not typically in my price range. But I was on the East Coast for [trainer] Norm Casse and [TV presenter] Gabby Gaudet's wedding, and I thought, 'I may as well just go for Book 1,'” Blacker recalled. “So I hooked up with Boomer and we looked at that horse a bunch. He had a great pedigree by More Than Ready. We really liked the horse and knew he would be a grass horse. He was a bit small as a yearling but was a lovely mover and had a really nice temperament. He didn't sell, he RNA'd, but we went back to the barn at Taylor Made and bought him back at the barn. But I give Boomer all the credit, he was really bullish about getting him and he felt really confident about the horse. We were really thrilled at the time to get him for a great group of owners, some of which have been with me from the beginning and have been really loyal.”

Blacker described his first 10 years as a trainer as “hard but rewarding.”

“It's building up your name, your reputation, your stable, getting better quality horses, better owners-it's been hard but it's been rewarding and I'm glad we're getting to the point where we're improving our quality of horses,” he reflected. “But my path [starting with two horses], I don't think that's something you could do in other countries, and that's what I love about America. People are much more willing to give young people a chance and you can start with nothing. If you're passionate about it and you work hard, you're going to make it.”

Blacker said another major gulf between racing in America and Europe is in the opportunities to acquire quality bloodstock.

“You look at all the horses that have won the Kentucky Derby the last 10 years–I don't know the exact numbers but the vast majority of them went through the ring,” he said. “The big owners back home in Europe have all the best stock and best families, whereas in America, all the best horses go through the ring and there is a small number that are homebreds. You can have a chance to get the best horses if you have the money and you have the eye.”

Another factor keeping trainers like Blacker on their toes in America is the higher rate of turnover of horses than one might see in Europe.

“Horses come in and out much quicker,” Blacker noted. “A yard in Newmarket might start the year with 40 or 50 horses, and at the end of the year you'd pretty much have on the whole the same 40 or 50 horses in the yard. Here, you might start the year with 25 horses and end it with 25 horses, but most of them will be different horses. We bring the horses in, get them ready, run them a few times, they might pick up something and we send them back to the farm. They have a few months off and we bring them back in and bring them up. There's no winter and summer season; the horses are in constant turnover. So you're always looking for that next horse to fill the space of the one that just left. You have to keep your foot on the gas and keep hustling and working away. When you take your foot off the gas, you might get your numbers down and get out of the limelight. You have to keep getting your name out there.”

One way Blacker enjoys filling his stalls is with European imports.

“I love the Tattersalls horses in training sale,” he said. “It's a fun sale but what's really interesting is why certain horses work. There is a certain profile of European horse that when you bring it to California, it excels. It's something to do with their pedigree, with the way we train here, their conformation; it's not just that better horses in England will go on and be the better horses here. There is a certain type of horse that really excels, and that's the key, is really trying to pinpoint that type of individual.”

Blacker said he tends to look for the progeny of sires that have already worked in America, as well as horses with good form on firm going themselves and that are of a lighter build.

“Generally the stallions that are obviously firm turf influences will do well, but I'll look for stallions that have already had success over here,” he said. “That's the first thing, and firm ground form really helps. Typically, I've found that horses tend to put on weight, put on muscle, when they come here. I look for the lighter framed ones, the smaller fillies that might, when they come here and put on weight, start looking really good. If you start with one that's really big and bulky, a lot of times when they get here they get too big and heavy and they can't handle training on the dirt oval every single day. Because it's not just the racing, it's training on the flat dirt every single day. That's hard on horses and you need a really sound horse that's conformed well in order to withstand that constant pounding every single day. So it's a really unique type of individual that thrives here.”

So Blacker continues his quest to continue building the quality of his stable. He'll also be hoping that Hit The Road continues to thrive ahead of his next big assignment.

“We've got the Kilroe Mile pencilled in on Mar. 6,” Blacker said. “Everyone keeps telling me that he runs well fresh so this will be a little test for him. It's coming back in four weeks and that's probably the shortest we'd want to come back in. But he bounced out of the race really well; he's got good energy and all the signs are looking very favourable that he's going to be ready for the race on Mar. 6 and run well. We know he loves the track here at Santa Anita, he loves the firm turf, so that's the most likely scenario. After that there might be some things further afield, but we're just pointing him to that one right now.”