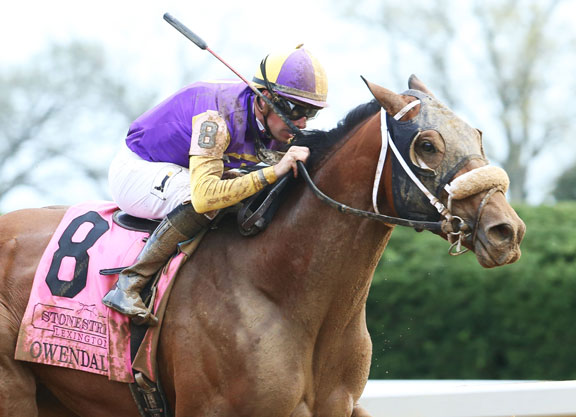 Rupp Racing's late-running Owendale (Into Mischief), who missed second by a whisker while running on the deeper part of the track in the GI Preakness S., appears to have a tactical advantage and will try to mow them all down as the morning-line favorite in Saturday's GIII Ohio Derby at Thistledown.

Pulling off a 12-1 upset in the GIII Stonestreet Lexington S. Apr. 13 at Keeneland, the $200,000 Keeneland September graduate finished full of run in the middle of the track in the Preakness, beaten just 1 1/4 lengths by rail-skimming War of Will (War Front) and a nose by the inside-running longshot Everfast (Take Charge Indy). With several other speed types signed on, he figures to have no excuse in the nine-furlong test, and drilled a bullet five furlongs in :59 2/5 (1/21) June 15 at Churchill for trainer Brad Cox.

Willis Horton Racing's hard-knocking Long Range Toddy (Take Charge Indy) makes his first appearance since being involved in the GI Kentucky Derby's far-turn kerfuffle. A three-time stakes winner, including in the GII Rebel S. Mar. 16 at Oaklawn, the dark bay was checked hard when Maximum Security (New Year's Day) bore out in Louisville and was the final horse the Derby's initial winner was placed behind when elevated one spot after splashing home 17th.

The wild card is Don Ameche III, Gryphon Investments and Randy Reed's unbeaten Bethlehem Road (Quality Road), who gets the class test after three sharp scores at his Parx base. Debuting with a 4 1/4-length success Apr. 1 in Bethlehem, he repeated in an optional claimer there three weeks later, then impressively annexed the Parx Spring Derby making his two-turn debut May 21. Challenged several different times while setting a fast clip that day, he turned everyone back and kept finding to score by a deceivingly-dominant 1 1/2 lengths. In addition to the stiffer competition, the gelding has tactical hurdles to clear, as he's done all of his running on the lead thus far, and there are one-way speed types drawn to his inside and outside here.