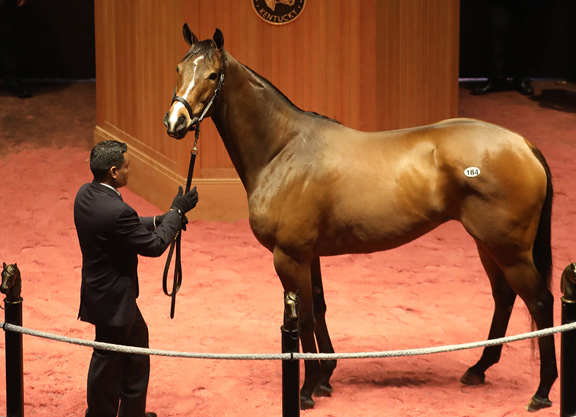 “It is hit or miss at a smaller sale like this,” Graves said. “February sales are up and down. There is not as much quality as November and January. I think there is fair value for a good one when they bring it in there.”

“Clearly, if you looked at the catalogue and analyzed it, tomorrow is the much strong day in terms of quality offerings,” said Fasig-Tipton President Boyd Browning, Jr. “I thought today went as expected. For the pages you turned down in your catalogue before the sale and said, 'There should be good interest in this one,' there was good interest in that one. For the horses you thought won't be easy, it wasn't easy. It is just a reflection of the reality of the marketplace. There are just some horses we offer that have limited commercial value.”

The Fasig-Tipton Winter Mixed Sale continues Tuesday at 10 a.m. starting with hip 325 through the supplemental catalogue.

Bloodstock agent Andre Lynch was determined for the mares who caught his eye, going to $150,000 for Over Emphasize (Overanalyze) (Hip 184) and fighting off a stubborn foe, who bid on the phone with Fasig President Boyd Browning, to take home Palace Princess (Hard Spun) (Hip 186) two hips later.

Consigned by St. George Sales, Over Emphasize only won one of her eight starts, but placed in a pair of graded events in the summer of 2019 for earnings of $109,745. A $40,000 KEESEP buy, the session topper was campaigned by Mel and Jean Annuzzi and trainer Mike McCarthy. She is a half to stakes winner Allanah (Scat Daddy) and sold as a racing/broodmare prospect.

“I bought her for myself at the moment,” Lynch said. “She is a lovely mare trained by Michael McCarthy. We ran against her a couple of times with Maxim Rate (Exchange Rate). I don't know what I am going to breed her to yet, maybe Justify.”

Palace Princess is out of a daughter of Hall of Famer Azeri (Jade Hunter), who produced MGSW & GISP Wine Princess (Ghostzapper). She was sold by Taylor Made Sales Agency as a broodmare prospect.

“I bought her for myself and a friend. I haven't told my friend yet,” Lynch said with a grin. “I was thinking maybe Uncle Mo or American Pharoah.”

Brian Graves took home the day's most expensive yearling on behalf of his Big Sky Stables pinhooking partnership, signing the ticket at $140,000 for a son of Connect colt (hip 254).

“He is a Saratoga-type individual, so that is probably the game plan to take him up to Saratoga and see how we do,” said Graves. “You don't have to wait too long.”

As for his thoughts on the first crop of GI Cigar Mile hero Connect (Curlin), the Gainesway General Manager said, “That is the second horse by Connect I bought and the fourth horse I've bid on by him, so I guess I like what he is doing.”

Consigned by Bluewater Sales on behalf of breeder Nancy Mazzoni, hip 254 is out of the Posse mare She Be Keene, who is a half-sister to champion She Be Wild (Offlee Wild).

Arkansan Dash Goff came out on top of a lively round of bidding to acquire Me and Mine (Bernardini) (hip 127), in foal to Kantharos, for $135,000 at Fasig-Tipton. A $40,000 claim by Kingdom Bloodstock at Laurel in 2017, the bay had her first foal last year, a filly by Maclean's Music, and was consigned Monday by Hill 'n' Dale Sales Agency.

Out of SP Oneofacat (Deputy Minister), Me and Mine is a half to three stakes-placed runners. European champion Hold That Tiger (Storm Cat) and GI Belmont S. winner Editor's Note (Forty Niner) are under the second dam.

“She is a nice mare,” Goff said. “Bane and Chris Welker keep my horses and I am just trying to get a couple of nice mares to replace the ones I've had.”

Me and Mine brings Goff's broodmare band up to three and he has 15 horses altogether, focusing on the Arkansas and Oklahoma-bred programs.

“I won the fourth race at Oaklawn [Sunday], an Arkansas-bred maiden,” said Goff, while sporting an Oaklawn hat. “I am mainly buying Arkansas-breds. What is happening at Oaklawn is unreal with the expansion and the purses. I have started really building up racing there and Oklahoma.”

Joe DiRico has been in the game a long time, even picking out MGSW Disco Rico (Citidancer) for his father Alfred DiRico back in 1999. With retirement looming, he was busy at Fasig Monday, expanding his broodmare band, purchasing a pair of six-figure mares. He went to $135,000 for Samara (Hard Spun) (hip 244) and $100,000 for My Bronx Tail (Speightstown) (hip 160).

“I am thinking of retiring,” DiRico, seated alongside advisor Jack Harvey, said. “I have free time on my hands, so I want to get more into the horses. I have some more funds at my disposal now.”

Samara was claimed by Michael Dubb for $40,000 at Saratoga in 2018. The Don Alberto-bred mare closed out her career with a trio of wins last winter, capped by a victory in the Captiva Island S. at Gulfstream. She RNA'd for $185,000 at Keeneland November and was sold by Brookdale here as a broodmare prospect.

“She had a beautiful presence and she was a real physical specimen,” DiRico said. “She looked like Mike Tyson. You have Hard Spun on top and Storm Cat on the bottom. She beat a 3-5 shot in that stakes race in Florida and won her last three races. I am happy to have her.”

“The other one I bought earlier is going to go to Mitole,” DiRico said. “I watched her last race at Aqueduct and she pulled away from the field and broke 1:35 for the mile. She has really good mechanics in the way she traveled. Being by Speightstown out of a graded dam, I thought I couldn't go wrong.”

DiRico's Monday purchases, plus a mare named Grace's Treasure (Rockport Harbor) whom he purchased for $100,000 at KEEJAN, will be sent to New York to drop their foals. Grace's Treasure is also scheduled to visit Dr. Disco, who stands at the Empire State's Keane Stud.