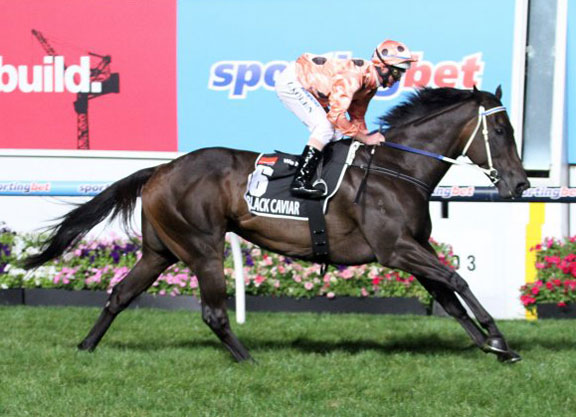 Oscietra (Aus) (Exceed And Excel {Aus}), the first foal out of undefeated Australian superstar Black Caviar (Aus) (Bel Esprit {Aus}), has officially been entered in a pair of 1000-metre juvenile races at Moonee Valley Dec. 31 and at Flemington New Year's Day, reported Racing and Sports. Co-trainer David Hayes prefers the Flemington feature for his charge versus her own sex Jan. 1, as the latter only has 18 nominations compared to the 28 of the open race at Moonee Valley. Black Caviar won her debut at Flemington going 1000 metres in 2009 for the same group of owners. Oscietra has jumped out twice to date, winning an 800-metre test at Flemington Dec. 9. With her dam's regular pilot Luke Nolen in the irons, Oscietra finished up in the forefront of the field in a Dec. 23 jump out, once again at Flemington.