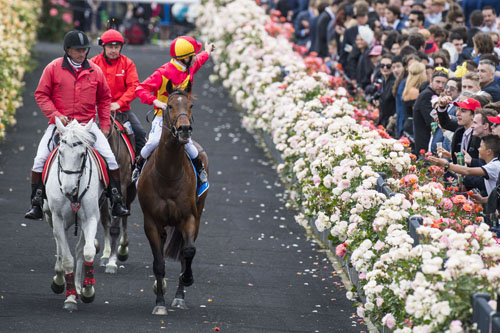 With an impressive line-up of 12 accepting for the first Group 1 of 2017, the C.F. Orr S. over 1400m at Caulfield, the only thing that could have made the race any better would've been to see Champion mare Winx (Aus) (Street Cry {Ire}) contest the race rather than the G2 Apollo S. at Randwick on the same day where she aims to extend her unbeaten run to 14.

The last-start G2 Australia S. quinella of Malaguerra (Aus) (Magnus {Aus}) and Black Heart Bart (Aus) (Blackfriars {Aus}), are likely to battle it out for favouritism, while the lone 3-year-old in the field, last spring's G1 Caulfield Guineas (1600m) winner Divine Prophet (Aus) (Choisir {Aus}) also adds a layer of intrigue to the A$500,000 contest.

While Malaguerra does have two wins at the trip, it's Darren Weir's Black Heart Bart that really excels with six victories, all at black-type level including the G1 Memsie S. in August at the track where the beaten brigade included his stablemate Palentino (Aus) (Teofilo {Aus}), who he also faces here.

With a weight advantage and two wins first-up from three runs, Divine Prophet could be the one to watch with Dwayne Dunn in the saddle. While 3-year-olds don't win the race out of turn, winners include champion colts All Too Hard (Aus) and Redoute's Choice (Aus), both having won the Caulfield Guineas during their previous campaign.

Co-trainer Wayne Hawkes said Divine Prophet may be overlooked. “He's not the high-profile horse and has snuck under a few people's radar but his form is pretty faultless,” Hawkes said.

A winner of the G1 Toorak H. two starts back over the mile, He's Our Rokkii (NZ) (Roc de Cambes {NZ}) has come a long way in a short period of time, and by winning at his first attempt at Group 1 level, the David and Ben Hayes and Tom Dabernig-trained gelding does have the capabilities to produce fresh and cause an upset.

Successful in the G1 VRC Oaks at three and the G1 Caulfield Cup at four, both over the classic trip of 2400m, Jameka (Aus) (Myboycharlie {Ire}) may be slightly out of her depth over the 1400m, but ignoring the classy Ciaron Maher-trained mare should be at your own peril.

One of only three in the field yet to taste victory at the elite level, the Chris Waller-trained Arod (Ire) (Teofilo {Ire}) may be at a distance short of his best, but with world-class form over 1600m against the likes of Night Of Thunder (Ire), Lightning Spear (GB) and Solow (GB), the Qatar Racing-owned stallion prospect could get a cosy run from the inside gate.