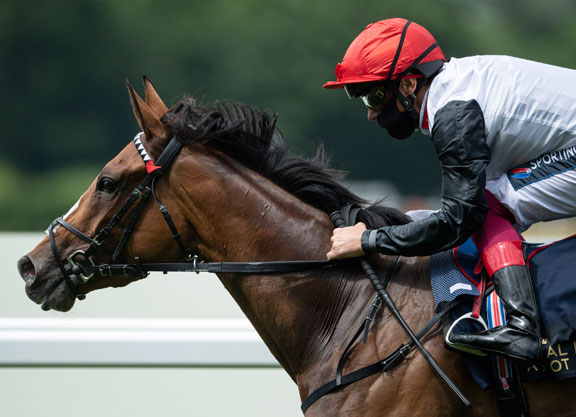 The Oppenheimer Family’s Hascombe and Valiant Studs has bred the winners of each of the British Classics bar one, and next Saturday it has an opportunity to complete the collection with Frankly Darling (GB) (Frankel {GB}) in the G1 Investec Oaks.

Kicking things off in 1982 was On The House (Fr) (Be My Guest), who was campaigned by Anthony Oppenheimer’s father Sir Philip Oppenheimer and won the G1 1000 Guineas. The family also bred the G1 2000 Guineas winner Footstepsinthesand (GB) and G1 St Leger winner Harbour Law (GB), who campaigned for other connections, and in 2015 homebred Golden Horn (GB) won the G1 Investec Derby.

“I would absolutely love to win the Oaks–it’s the only British Classic we haven’t bred the winner of and it’s one of my big ambitions,” said Oppenheimer. “It won’t be easy, of course, but let’s hope this filly can do it.”

“It was fantastic to watch [at Royal Ascot],” Oppenheimer said. “We thought she was useful, but to see her win the way she did was very nice. In these times that we’re in, to have a big winner like that was really good.

“I think that [the Oaks] is the intention at the moment, as long as the ground is suitable. We’ll see what the opposition is like nearer the time–there’ll be only one Hascombe horse and there might be 10 or more from Coolmore, which will be interesting.”