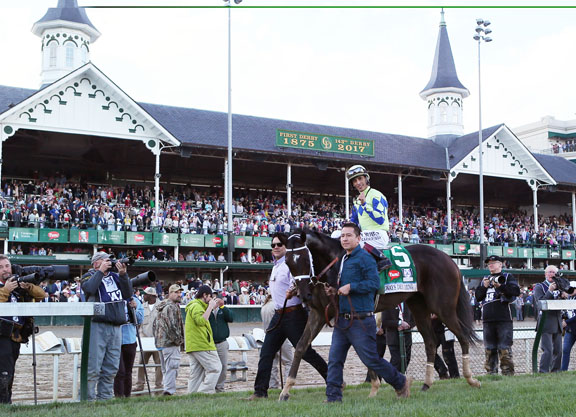 The first thing we have to say about last Saturday's GI Kentucky Derby Presented by Yum! Brands is that GI Xpressbet Florida Derby winner Always Dreaming, from the first crop by WinStar's Bodemeister, was the worthy winner. Johnny Velazquez had him in the perfect stalking position all the way around, went to the lead by the half-mile pole, repelled 'TDN Rising Star' Battle of Midway (Smart Strike)–who held on gallantly for third–and fellow 'Rising Star' Irish War Cry (Curlin) at the quarter pole, and was always the winner from there. Lookin At Lee, a deep closer by Lookin At Lucky (also by Smart Strike) who had finished third in the GI Arkansas Derby, ran on for second, with Battle of Midway third and Arkansas Derby winner Classic Empire fourth, having encountered enough trouble to keep it from being an Empire Maker exacta–since Classic Empire is by Pioneerof the Nile, like Bodemeister a son of Empire Maker. This does make it the second time in three years that Empire Maker, now himself back in residence in Kentucky, at Gainesway Farm, is the grandsire of the Derby winner, since of course Pioneerof the Nile, also a WinStar stallion, is also the sire of 2015 Triple Crown winner American Pharoah. So I think we can now officially refer to Empire Maker/Unbridled (also sire of Unbridled's Song)/Fappiano as a hot two-turn Classic dirt sire line.

That's probably not just a convenient classifying system; in the case of Always Dreaming, neither his sire nor his dam stayed 10 furlongs. Bodemeister definitely did not; he got nine furlongs all right, as evidenced by his 9 1/2-length demolition job in the 2012 GI Arkansas Derby. But after setting a :45:1/5 and 1:09:4/5 pace he couldn't see out the trip, and I'll Have Another outstayed him to win the GI Kentucky Derby by 1 1/2 lengths. Bodemeister set a much slower pace in the GI Preakness S.–47:3/5, 1:11:3/5–but still I'll Have Another got up to win. Always Dreaming's dam, Above Perfection, was an out-and-out sprinter; the only times she went two turns was in a van. So it's pretty likely Empire Maker, second to Funny Cide (from Distorted Humor's first crop) as the favorite in the 2003 Derby but winner of the 12-furlong GI Belmont S. in his next start, provided a positive injection of stamina. That is absolutely the best news the many followers of Bodemeister could have, because it means he has already proven he can sire a Derby winner, even if he couldn't win the Derby himself.

Of course, Bodemeister now gallops to the front among North American second-crop sires, since the Derby winner's share of $1,635,800 was by itself more than the former leader and new runner-up, Darby Dan's Shackleford, himself has in progeny earnings for the whole of the year so far (click here). Moving up now to number three among 2017 North American second-crop sires is Lane's End's Union Rags. He had the big favorite for Friday's GI Kentucky Oaks in Paradise Woods; she blew out after a contested lead in the Friday slop, but over the two days Union Rags did have two other 3-year-olds place in graded stakes at Churchill Downs: the filly Union Strike (previously a Grade I winner of the Del Mar Debutante S.) ran second in the GII Eight Belles S. on Friday, while on Saturday the colt No Dozing ran second in the GIII Pat Day Mile S., his third graded stakes placing. Union Rags now has five Graded Stakes Horses (GSH) this year; no other North American second-crop sire has more than two (though Frankel already has six). Union Rags also had a good winner in France on Sunday, as Shadwell's homebred 'TDN Rising Star' Musaawah won an 11-furlong listed race and put herself in line for a try at a Classic.

Bodemeister also went to the head of the class by cumulative earnings by North American second-crop sires (click here), over $1 million ahead of Union Rags and last year's Leading North American Freshman Sire, Darby Dan's Dialed In, in a virtual dead-heat for second, with Darby Dan's other second-crop sire, Shackleford, in fourth. Also over $2 million in cumulative progeny earnings among these sires are: Lane's End's The Factor, by War Front, who has woken up lately and is now tied for the lead among this group by cumulative BTW, with five, along with Dialed In (Frankel: 8, all in fact GSWs); and Coolmore Ashford's Stay Thirsty (Bernardini), this group's leader by cumulative winners, with 39.

Though the Union Rags filly couldn't win the GI Kentucky Oaks, Lane's End still had the winner's sire as Abel Tasman, from the third crop by Quality Road, blinkers on for Baffert, picked up the pieces and added her second Grade I win, after last year's GI Starlet S., run at Los Alamitos. If you look at the table of North American fourth-crop sires in 2017 (click here), Quality Road leads in absolutely every category. He also leads in every black-type category on the cumulative North American fourth-crop sire list (click here), except for number of Black-Type Winners (BTW); Ashford's Munnings is the runaway leader in that category, with 20. But Quality Road is the only sire in this group with four Grade I winners (WinStar's Super Saver has three, but none since 2015), and has 10 GSW (Super Saver 7, Munnings 6). So he is the clear number one.

This, as we've been saying for a while, is a very interesting group of sires. There's now no doubt that Quality Road is the number one North American F2012 sire. The Ashford duo of Munnings and Lookin At Lucky are two-three on the cumulative earnings list, but oh my, spare a thought for Lookin At Lucky. This year, in 2017, especially after Lookin At Lee's $400,000 Derby second, Lookin At Lucky is number two by progeny earnings, and has 10 Black-Type Horses, six of them Graded, and of course Lookin At Lee now twice Grade I-placed–but he doesn't even have a Black-Type Winner yet this year. Lookin At Lucky is tied with Quality Road with six cumulative Grade I Horses, but whereas Quality Road has four Grade I winners, Lookin At Lucky has none. You'll recall he always scores high on the APEX scale (2.79 A Runner Index), but boy could he use a change of, I don't know–luck.

Bodemeister is undoubtedly way beyond sold out at his $25,000 stud fee for 2017, but you'd be a pretty happy customer right now if you have a mare in foal to him, because that price is going to change. Union Rags was $50,000 this year, so he was fully valued, except that they had over 300 applications at that price. Among the second-crop sires, the Darby Dan duo of Dialed In and Shackleford were both $15,000 this year. Among the fourth-crop sires, Quality Road at $35,000 must qualify as serious value, and Munnings at $25,000 and Lookin At Lucky at $17,500 seem very attractively priced as well. It's too late in the breeding season now for these results to have too much of an immediate practical impact, but if there happen to be any openings, any breeder still with a mare who merits those levels of stud fees should be on the phone by now.

There is no doubt that Banstead Manor's Frankel is The Next Big Thing: he's Galileo's best son; he was the unbeaten best racehorse of all time; and he's already the sire of eight Black-Type Winners–every one so far a group winner–and 11 Black-Type Horses, 10 of them Group Horses (click here). He's already sired 15 horses whose best RPR's (Racing Post Ratings) are 95+. He's a phenomenon. But last weekend: he had four runners in the English Guineas, two in each–four unplaced. Frankel may be on the way there–he nearly is there–but that seat is still occupied by his daddy, the one, the only Galileo. On Saturday, Champion 2016 European 2-Year-Old Churchill, by Galileo out of Meow, by Storm Cat out of the top sprinter Airwave, won the G1 English 2000 Guineas; also on Saturday, the 4-year-old filly Seventh Heaven, by Galileo out of La Traviata, by Johannesburg, and a dual Group 1 winner last year of the Irish Oaks and the Yorkshire Oaks, and second to Jack Hobbs first time out this year in the G1 Sheema Classic in Dubai, trotted up in the G2 Jockey Club S. at Newmarket. So Saturday was Galileo out of the Storm Cat line day. Then on Sunday Galileo and his trainer, Aidan O'Brien, had the one-two in the G1 English 1000 Guineas, new Group 1 winner Winter, who is out of the Choisir mare Laddies Poker Two, subject of an almighty gamble when she won the 2010 Wokingham H. at six furlongs at Royal Ascot. Winter got first run on previous Group 1 winner, stablemate and favorite Rhododendron, by Galileo out of Halfway to Heaven, by Pivotal, and who came home second; as well as oh, yes, the first three in the G2 Derrinstown Stud Trial at Leopardstown, all by Galileo, all trained by Aidan O'Brien.