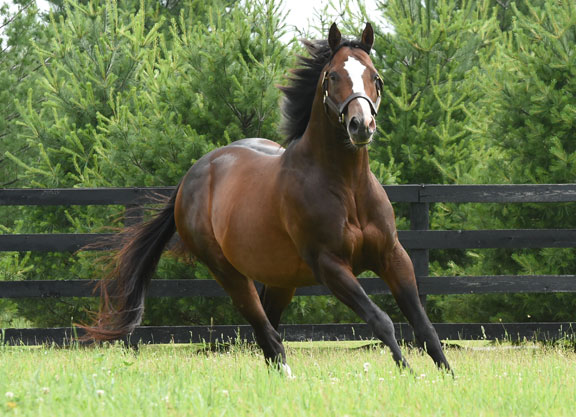 American Anthem’s win in last Saturday’s GIII Lazaro Barrera S. at seven furlongs, having cut back from two-turn GI Kentucky Derby preps, marked an important milestone for WinStar’s newly minted Leading Second-Crop Sire, Bodemeister, in that he became his sire’s second graded stakes winner (GSW) (click here). Bodemeister has always scored high among this group of sires in terms of the number of above-average runners he’s producing, and it’s converting above-average runners into Black-Type and Graded Stakes Horses which means a sire is starting to separate himself out from the crowd, in a good way. That’s why American Anthem is a big deal for Bodemeister, and, interestingly, in almost the same way Classic Empire confirmed Pioneerof the Nile as a top sire last year, after American Pharoah. Both Pioneerof the Nile and Bodemeister, as you know, are sons of Gainesway’s repatriated Empire Maker, so the Fappiano sire line continues to look good as a primary American dirt line–and both stand at WinStar, by the way.

Darby Dan continues to have Shackleford in second place and Dialed In fifth (virtual dead-heat for fourth, as of yesterday) by 2017 progeny earnings, among seven North American second-crop sires with over $1 million in progeny earnings thus far in 2017. Lane’s End also has two stallions among the seven, number three Union Rags, who leads or is tied for the lead among this group in all black-type categories; and The Factor, from War Front’s first crop, who has taken over the lead by number of 2017 winners (28), including seven 2017 stakes horses. Ashford’s Stay Thirsty, who just surrendered the 2017 winners lead (27) and Hill ‘n’ Dale’s Maclean’s Music round out the top seven. Besides Always Dreaming, Dialed In (Gunnevera), The Factor (Multiplier) and Maclean’s Music (Cloud Computing) are scheduled to have runners in this Saturday’s GI Preakness S.

In Europe, the G1 English 2000 (colts) and G1 1000 (fillies) Guineas were run two weekends ago at one mile at Newmarket, with the French equivalents, run over a straight mile at Deauville while their traditional home of Longchamp is being redeveloped, last weekend. There has been plenty of European second-crop sire action in these four Classics, you can be sure of that. The Haras de la Cauviniere team which brought you Le Havre had the biggest win, as their second sire project, Rajsaman, is the sire of the G1 French 2000 (Poule d’Essai des Poulains) winner Brametot, which moves Rajsaman to third among European second-crop sires by worldwide 2017 earnings (click here). Coolmore’s Excelebration is now in the fourth spot after Barney Roy’s second to Churchill in the English 2000. Also last weekend Galileo’s and Sea The Stars’s half-brother Born To Sea (by Invincible Spirit) had Sea of Grace, who was second in the G1 French 1000 (Poule d’Essai des Pouliches), to move him up to 11th in Europe in 2017.

But what of Juddmonte’s Frankel? He has sired no fewer than 15 runners which have run Racing Post Ratings (RPR) of 100+, including eight GSW; it is the best start by any stallion in recent memory in respect of the number of well above average horses he is siring. But he struck out in the first round of Classics: in the four Guineas races plus last Sunday’s 10-furlong G1 Prix Saint-Alary for 3-year-old fillies, Frankel had six runners. Two ran fifth, two ran sixth, and two were even farther back, so immediately the bush telegraph (I mean social media) starts humming: will any of these group winners and 100+ RPR’s convert to a European Group 1 winner? Oh yeah, take those odds. Tomorrow John Gosden runs Epsom Conditions Race (Investec Derby Trial, a win-and-you’re-in for the G1 Epsom Derby but not a black-type race) winner Cracksman in the G2 Dante S. Frankel could end up having 20 or more black-type horses (BTH) from this crop. Besides Excelebration and F2013 Zoffany (both Coolmore sires), the other European second-crop sire whose form was closest to Frankel was Newsells Park’s Nathaniel, whose 3-year-olds have come to life this year, including six stakes horses already in 2017, just one less than Frankel.

NORTH AMERICA F2013: Coolmore Ashford’s Uncle Mo jumped straight into the World Top 12 (a mythical, but important group) with his first 2-year-olds in 2015 (including champion Nyquist) and 3-year-olds in 2016. With their oldest now 4-year-olds, Uncle Mo continues to be out on his own among North American third-crop sires, as evidenced by his $150,000 stud fee; the number two cumulative third-crop NA sire, Lane’s End’s Twirling Candy, stands for $20,000 and is the only other one standing for more than $10,000. Cumulatively, Uncle Mo has 25 Black-Type Winners, Twirling Candy 10; only one other North American third-crop sire (Spendthrift’s Tizway, with eight) has more than five.

EUROPE F2013: This list shows 2010 G1 Epsom Derby winner Workforce as Europe’s leading third-crop sire by 2017 earnings, but we have to ignore him as he has been transferred from Japan, where he has all those winners, to stand as a jumps sire in Ireland, which is why he’s included on a list of current European sires (believe me, we explored with TJCIS–The Jockey Club Information Systems–every conceivable way around these issues where sires have runners in one region but now stand somewhere else, and this is the best answer–he is included, but we say for our purposes to ignore him). Dream Ahead, sire of English 2000 Guineas third Al Wukair and who is standing in France at Haras de Grandcamp this year, from Ballylinch in Ireland, is the actual third-crop European leader in 2017, ahead of Rathbarry’s Lilbourne Lad and the Coolmore pair of Zoffany and Canford Cliffs. Cumulatively, Zoffany is the third-crop leader, including in all black-type categories, though he and second-ranked Wootton Bassett, at Haras d’Etreham and sire of last year’s top European 3-year-old colt, Almanzor, are the only third-crop European sires to have yet sired a Group 1 winner. Dream Ahead, Canford Cliffs, and Darley’s Poet’s Voice round out the top five by cumulative earnings.

CROP REPORTS: Finally, another interesting pair of lists to look at, also under Sire Lists on the TDN website, are the Crop Reports, so for 3-year-olds of 2017, we’ll look at Foals of 2014, and again we’ll divide them into North America and Europe. For North American sires (click here), Spendthrift’s remarkable Into Mischief is still the leader, with 68 winners from 119 runners, from his first big crop of 158 named foals, which include seven Black-Type Winners and the earners of over $5.6 million. Bodemeister (first crop) is currently second, ahead of Gainesway’s Tapit and WinStar’s Pioneerof the Nile (Empire Maker fourth but from a Japanese crop). Tapit and Claiborne’s War Front are tied for the lead with 11 Black-Type Winners and 17 Black-Type Horses each from this crop. Tapit tops the group with seven GSW, War Front tops it by Graded/Group Stakes Horses, with 13. Union Rags (first crop) is the top sire with three Grade I/Group 1 winners, War Front top with six Grade I/Group 1 horses. Among European sires (click here)–Coolmore’s Galileo is number one, and he leads in all Black-Type categories, too, his four 2014 crop Group 1 winners including, of course, G1 English 2000 Guineas winner, Churchill. Frankel (first crop) is number two in Europe, ahead of Darley’s Helmet (first crop), sire of last year’s Group 1 winner and this year’s G2 UAE Derby winner and Kentucky Derby rodeo contestant, Thunder Snow. Tally-Ho Stud’s Kodiac ranks fourth among European sires (skipping Workforce), and has 19 Black-Type Horses from this crop, including the winner last weekend of the 11 1/2-furlong Lingfield Derby Trial–not your typical Kodiac. Contact Bill Oppenheim at [email protected] (cc [email protected]).