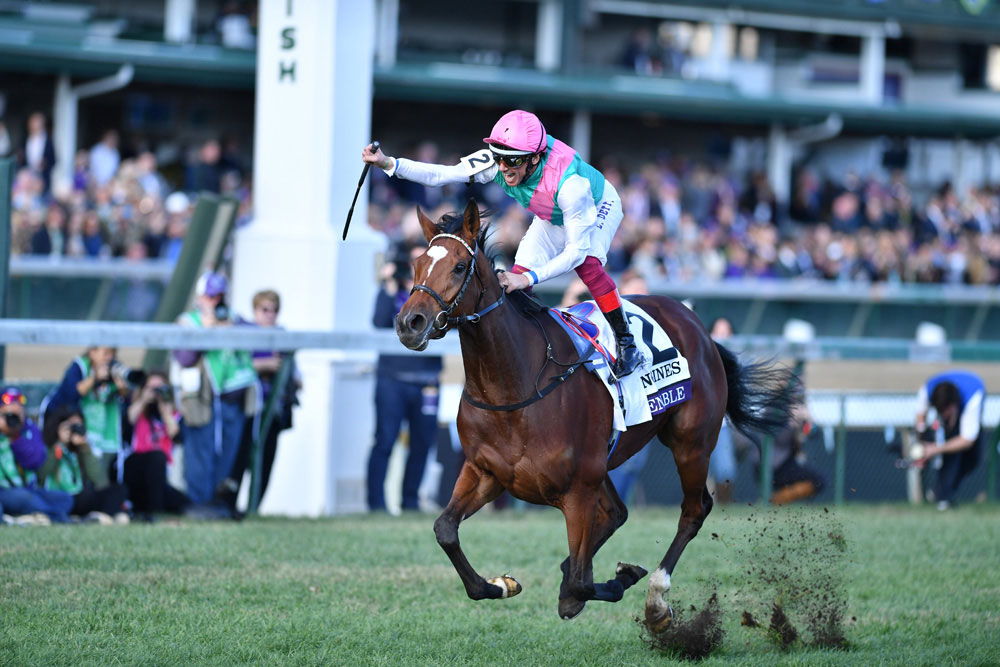 Since the Eclipse Awards were initiated in 1971 the only rule has been that there are no rules. Want to vote for a $12,500 claimer for Horse of the Year? Well, you'd be making a fool out of yourself, but nowhere does it say you can't do that. For the longest time, there was something almost endearing about a system that was so simple, and, much more often than not, the voters got it right.

But this is a far more complicated business than it was 47 years ago and there are some areas and categories that are now crying out for some sort of criteria to help guide the voters. That, and it's time to add a new category–turf sprint champion.

The Eclipse Award for leading owner has became a mess. By most standards, Sol Kumin had the best year among all owners in 2017. According to Liz Crow, Kumin's bloodstock advisor, Kumin and his various partnerships owned pieces of 26 graded stakes winners and seven Grade I winners. She said both totals were more than double the runner-up in each category. He rarely owns a horse without partners, sometimes multiple partners.

Yet, Kumin and the multiple stable names he runs under received 19 votes, 124 fewer than the winner. Juddmonte Farms. How is that possible?

It's because no one knows exactly how partnerships should be handled? What percentage did Kumin own of each horse? What about his partners within his partnerships? And why does he run under so many different stable names? That only further confused voters and likely cost him any chance of winning an Eclipse Award?

Kumin had another great year this year, but the same questions that dogged his candidacy last year will likely keep him from winning again.

Kumin is in the middle once again of what could be another Eclipse Award controversy. At the time Justify (Scat Daddy) started his career, his owners were WinStar Farm, China Horse Club and SF Racing LLC. Along the way, Kumin's Head of Plains Partners LLC and Starlight Racing bought in. In the needlessly secretive world of horse racing, we never were told what percentage the two newcomers owned and who owned what when it came to his racing career versus his stud career.

If you want to vote for Justify's owners for an Eclipse Award, should it be only the original three or the five that were there at the end? And if Voter A voted for the WinStar, China Horse Club and SF Racing LLC trio and Voter B voted for all five owners, should those votes count as one and the same? What if someone voted for just Kumin? Should that vote be included with all the other Justify owners?

“The growth of partnerships and hidden ownership interests, including the percentage controlled by each individual owner, has made it challenging to present a complete picture to Eclipse Awards voters,” said NTRA Chief Operating Officer Keith Chamblin. “We continue to examine ways to improve the statistical data provided to voters, but there are no easy solutions.”

Agreed. There is nothing anywhere close to an easy solution to this dilemma, but someone has to come up with an answer. It's too late for 2018, but for the following years, I believe a committee needs to be formed to study all possible Eclipse Award candidates in the ownership category, put out a detailed biography of exactly who they owned, how much of each horse they owned and how many graded and Grade I stakes they won. Only the people or stables chosen by the committee will be eligible for the award. Without that sort of information, it's impossible for a voter to make an educated choice.

On this next point, not everyone will agree, but something needs to be done to make sure that the championships of North American racing are won by North American horses. Voters tend to fall in love with one-race wonders who come in from Europe and win a Breeders' Cup race on the grass. To me, nothing that a horse accomplishes outside of the U.S. or Canada should count one bit toward their Eclipse Award credentials. The G1 Prix de l'Arc de Triomphe is a tremendous, prestigious race, but the last time I checked it is held in Paris, France and not Paris, Kentucky. So why should a horse get credit for winning that race–or any other foreign race–when it comes to deciding the championships of U.S. racing? Let's make American racing great again.

American voters' love affair with foreign horses is going to be tested this year. There are some people that are so infatuated with Arc-GI Breeders' Cup Turf winner Enable (GB) (Nathaniel {Ire}) that they are prepared to vote for her for not just the filly and mare grass championship, but for Horse of the Year.

In some years, years where no American horse among a particular division did anything to distinguish themselves, you can make a valid case for voting for a European Breeders' Cup winner. But that's not the case this year. Sistercharlie (Ire) (Myboycharlie {Ire}) had an outstanding year. Trained by Chad Brown, she won four Grade I races, all of them on U.S. soil. That includes a win in the GI Breeders' Cup Filly & Mare Turf.

What's needed is an adoption of the rule used for Canada's championships, the Sovereign Awards. Because they don't want interlopers from the U.S. coming in, winning one big race and stealing a Sovereign Award from a deserving Canadian horse, no horse, age three or older, is eligible for a Canadian championship unless they have run at least three times in Canada. Two-year-olds must have had at least two starts in Canada. The same rules should apply to the Eclipse Awards, though Canadian races should be included.

The Eclipse Award committee showed that it is willing to adapt to the times when it distinguished between the male and female turf and dirt championships in 2015. The problem was that turf horses were winning the championships for outstanding older filly and mare or horse. Not only had those awards traditionally been given to dirt horses, but once people started voting for grass horses in those categories there became an imbalance that had to be dealt with. A grass horse was eligible for two championships, the grass championship and the traditional older female or male championship. A dirt horse was restricted to only one Eclipse category.

It was an easy fix and reflected a changing time where grass racing has exploded in popularity. With grass racing more important now than ever and with the graded stakes committee having made a grass sprint, the Jaipur S. a Grade I, it's time to establish a grass sprint Eclipse Award. (I want to thank colleague John Pricci for coming up with this idea. He said he's fine with me stealing it from him).

The committee also upgraded five races to Grade IIs and three of them were turf sprints, the GII Breeders' Cup Juvenile Turf Sprint, the GII Eddie D. and the GII Twin Sprites Turf Sprint. Turf sprints are no longer an afterthought in American racing and deserve their own championship.

When Kumin wins 85% of all the turf sprint stakes run in this country under 43 different stable names, we'll deal with that problem at an appropriate time.