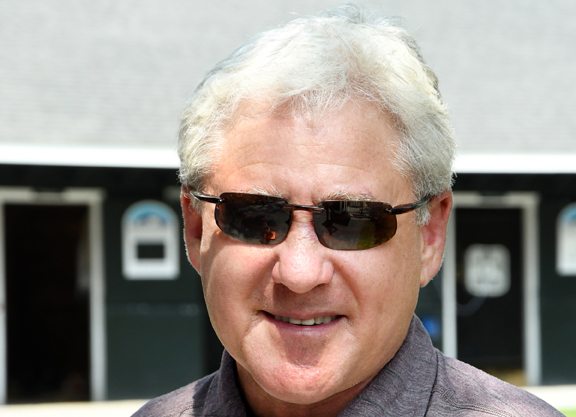 I don't know Rusty Arnold well, but I know him well enough. I know him well enough to know Rusty Arnold is no cheater. He's what they affectionately and endearingly in Kentucky refer to as a hardboot. A no-nonsense, no-bullshit kind of guy where pretty much what you see is what you get. A guy that isn't going to win any awards for public speaking or expressing himself extemporaneously. But a guy that shows up every day, does his job with pride and earns the respect of others. That'd be my take on Rusty Arnold.

I do know Bill Mott well. He has trained horses for me. He has been a good personal friend for 20-plus years. Our kids spent vacations together. And I'd stake a lot that Bill Mott is no cheater. I'm not sure he's quite the hardboot Rusty Arnold is but he's not too far from it. I know a little bit about what Bill Mott has been through fighting his drug violation in New York. I know a little bit about the toll on him financially and emotionally. I know a lesser man with less pride and perhaps more common sense would have decided not to fight it like he has. But the Bill Motts and Rusty Arnolds of the world have too much pride to take an injustice sitting down. They fight it because they know it's the system that's at fault not them. They stand up for themselves and in the process stand up for others who are too weak or can't afford to do it.

This week, Kentucky stewards decided to overturn Arnold's positive after the KHRC lab reversed its initial findings. “At the end of the day,” KHRC executive director Mark Guilfoil said, “we did the right thing.” We should congratulate Mr. Guilfoil for doing the right thing.

I came out in support of the Horse Racing Integrity Act several years ago. I believe in it strongly. As President of the Consignors and Breeders Association, I led that organization to become a member of the Coalition for Horse Racing Integrity. I was glad to have the opportunity to vote yes as a board member when the KTA/KTBOA joined. The reason to support it is so obvious it infuriates me. But like everything in this industry meaningful change borders between agonizingly slow and never happening. I believe that the regulation and testing system we have is broken, inadequate, flawed, antiquated, poorly administered and poorly funded. There is a contingent in our industry that will have you believe what we have works fine. That it's all a covert operation to get rid of Lasix. To stand up and say the former makes you look like an idiot. If it's about the latter, that's not my understanding of the objective.

My understanding of the objective is to have one set of rules and protocols administered by a knowledgeable ruling body that sets reasonable threshold levels based on good science, practical uniform rules that can be changed when science and circumstances call for it, and utilizes the most modern techniques and equipment in drug testing to regulate our sport.

Not only does it establish uniformity across 38 racing jurisdictions, but it puts our sport into the hands of anti-doping experts and a board who will make the common-sense distinctions between performance-enhancing drugs and those that aren't.

Who in their right mind with the right interests at heart doesn't want that? Who in their right mind can say that's what we have? I'm not a horse trainer. And I'm not a chemist. But if someone can explain to me how a picogram of something can affect the performance of a 1200-pound animal, I'm available any time. If a regulator can explain to me that the system we have where the primary, and in most cases, only form of testing is “we tell everyone what we are testing for and when we will test them” really catches cheaters, I'm available for that explanation, too.

But here is what I really can't understand. Why isn't every honest trainer demanding change? Why isn't every one of them behind this movement? Do they really think they can't be next?

Perhaps you are familiar with Malcolm Gladwell and his writings. They are pretty complicated and certainly not light reading. One of his most interesting books is The Tipping Point. Gladwell contends that there can be an event that results in action taken or behavior changed that is extraordinary and unexpected. To describe it in his words:

“The tipping point is that magic moment when an idea, trend, or social behavior crosses a threshold, tips, and spreads like wildfire.”

“If you want to bring a fundamental change in people's belief and behavior…you need to create a community around them, where those new beliefs can be practiced and expressed and nurtured.”

“There are exceptional people out there who are capable of starting epidemics. All you have to do is find them.”

I'd love to think Rusty's situation could be our Tipping Point.

What we desperately need from this group is leadership amongst the leaderless. I'll leave you with two thoughts in that regard from Lincoln:

“The best way to predict your future is to create it.”

“You can't escape the responsibility of tomorrow by evading it today.”

Change is rarely easy in anything. In this industry it often seems to border on impossible. But isn't it time trainers stand up and help us change this system that doesn't serve any of us or our horses very well? Or I guess you can just wait for your phone call.