One Last Dance for Rushing Fall and Her e5 Family 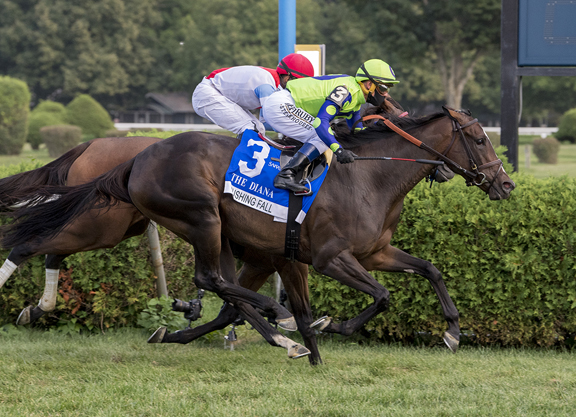 One year after their very first Breeders' Cup win with New Money Honey (Medaglia d'Oro) in 2016, Bob and Kristine Edwards of e5 Racing Thoroughbreds found themselves in the winner's circle once again for the same race, with the same trainer-jockey duo, when Rushing Fall claimed the GI Breeders' Cup Juvenile Fillies Turf.

As it turned out it was hardly beginner's luck, as Rushing Fall's victory was a good omen for the family's second Breeders' Cup contender that year, and it proved to be just the start of an unforgettable four-year campaign for the daughter of More Than Ready.

“It was an amazing feeling,” Bob Edwards said of watching the 'TDN Rising Star' cross the wire at Del Mar. “The emotions, the goosebumps, everything is really exciting. It took us 25 minutes to get through the crowd and walk down to the winner's circle since everybody was excited for us and congratulating us. Poor Javier [Castellano] was circling and circling.”

Edwards said that after posing for the photo, trainer Chad Brown had told the family to watch the Juvenile closer to the winner's circle the next day. It proved to be sound advice when Good Magic (Curlin), a colt they campaigned in partnership with Stonestreet Stables, became their second Breeders' Cup winner of the weekend.

Edwards's daughter Casi, e5's Equine Manager, was not able to attend their first Breeders' Cup victory with New Money Honey in 2016, but she made sure to be present for their Breeders' Cup double the next year.

“I had never been to the Breeders' Cup because New Money Honey ran when I was in college,” she said. “It was incredible. Everything worked out perfectly. The thrill to win two races in a row seemed unheard of and it was so much fun.”

After a five-month layoff following Rushing Fall's undefeated juvenile season, the $320,000 Fasig-Tipton Saratoga yearling returned with a vengeance at three, adding two more Grade II victories to her record before capping off the season with a win in the GI Queen Elizabeth II Challenge Cup S.  Then at four, she added two more Grade I wins in the Jenny Wiley S. followed by a near record-breaking performance in the Just a Game S., where she covered the mile in 1:31.67.

After a close second behind the prior year's Eclipse Champion Turf Female and stablemate Sistercharlie (Ire) {Myboycharlie (Ire)} in the GI Diana S. and then running out of the money for the first time in her career in the GI First Lady S., many assumed she would be whisked off to the breeding shed the next spring.

“After the [First Lady] at Keeneland, the media came up and asked what our plan was,” Edwards recalled. “I said, 'We're going to run her again,' and they were kind of like, 'Why?' I told them we like horse racing, and that's why we're in this. In the Diana, she ran arguably her best fractions and her best race ever. It takes a lot out of you to run big races and then regroup and go back again.”

Rushing Fall was brought back this year at five and is now enjoying her second undefeated season that began with a wire-to-wire victory in the GIII Beaugay S. before she returned to Grade I company.

“This season she raised the bar,” Edwards said. “We went into the second race of the season with a repeat in the Jenny Wiley where she broke the track record. And then going to Saratoga and winning the Diana was really special. There's a lot of pressure in that. The field was stacked with really good horses. My heart was pumping out of my chest. Everything you want out of horse ownership was right in that moment.”

Rushing Fall will soon return to Keeneland, where she ranks second behind Wise Dan for the most Keeneland graded stakes wins. She will be asked to go farther than ever before in the 1 3/16-mile Breeders' Cup Filly and Mare Turf, but Edwards said he has full confidence in the $2.5 million dollar earner.

“She's a different horse this year,” he said. “Even Javier said that and he knows better than I do. He said she's calmer. She's really focused. She just seems like she's that gifted athlete where she knows where her place is, she knows the competition–she sizes them up and walks through the paddock with her ears up and nose flared a bit. It's really special to see that out of your horse.”

Following the Breeders' Cup, Rushing Fall will make the quick trip down the road to the Fasig-Tipton 'Night of Stars' sale. The 5-year-old bay will sell as Hip 205 with the Indian Creek consignment.

Fasig-Tipton's Boyd Browning said, “She's one of only three mares to win Grade I stakes races at two, three, four and five. She has pretty good company with Beholder and Lady Eli. It's a rare accomplishment, and it just shows you how wonderful and brilliant Rushing Fall has been so far.”

“She was a stunning yearling,” Edwards said of his purchase. “She had a real presence about her, even as a yearling. Mike loved the horse.”

“I know Mike was really excited the night that he bought her,” Browning echoed. “She's got attitude, but it's attitude with class.”

Before Rushing Fall returns to the Fasig-Tipton sales ring, the Edwards family will enjoy one last dance with their leading mare.

“Everyone has their own race routine,” Casi Edwards said. “Since we've become part of racing, my dad has gotten very superstitious. My mom has a lucky purse that she always has to find an outfit to go with the purse. Coming into race day, everyone's always really nervous, but Rushing Fall always shows up. When she steps onto the track, you can see it in her. She's game and she's ready to do her job. She's an incredible racehorse and we're very lucky to have her in our family.”

“She's obviously the best horse we ever had, and maybe the best horse we'll ever have,” Bob Edwards said. “It's tough to see her career end, but you've got to let her be a mom at this point. She's won so many good races that I think I couldn't do her justice by keeping her. I think it's time for her to move on to a breeding operation that will set her up for the future. But these horses are an extension of your family after a while, and I think anybody that's going to be trying to purchase her knows she's a special horse.”