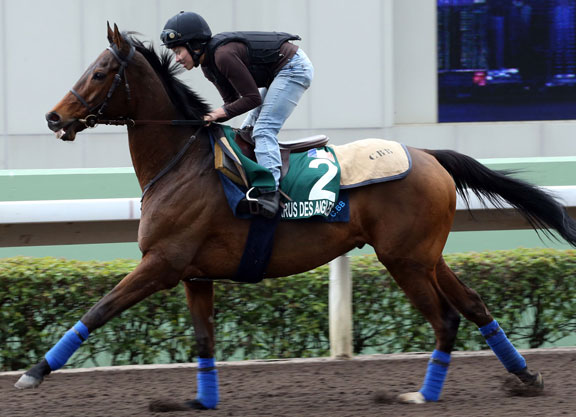 Together, they are a combined 25 years old, have made 169 starts for 48 wins, 15 at Group 1 level. They have earned nearly $20 million between them and, assuming they all make their respective races this weekend, will have made 16 appearances at the Longines Hong Kong International Races–17 if you’re willing to forgive a scratch at the 11th hour of one of the horses.

The grizzled vets in question are the 9-year-old Cirrus des Aigles (Fr) (Even Top {Ire}), back to where it all started in 2009 in the G1 Longines Hong Kong Vase; and the 8-year-old G1 Longines Hong Kong Sprint duo of Sole Power (GB) (Kyllachy {GB}) and Lucky Nine (Ire) (Dubawi {Ire}). And, like the Eveready bunny, they just keep on keeping on.

As a relatively unexposed sophomore back in 2009, trainer Corine Barande-Barbe put Cirrus des Aigles on the plane to Hong Kong for the first time to run in the Vase. He was fifth that day, not beaten all that far, behind His Highness the Aga Khan’s Daryakana (Fr) (Selkirk). Some 54 starts and seven top-level successes later, the spritely bay will contest the Vase, after four straight appearances in the Cup, including a close fourth behind Designs on Rome at the ripe old age of eight in 2014. Among those he’ll square off with? Daryakana’s 3-year-old son Dariyan (Fr) (Shamardal). Now, at the even-riper age of nine, there is no apparent end in sight for Cirrus des Aigles, who has looked very much at home this week.

“It’s very nice to be back, I feel no pressure,” Barande-Barbe said shortly after her arrival into Hong Kong. “He’s just like a dream. With Cirrus, everything looks like a dream. He seems very happy to be here, so as long as he’s happy, we come, and I think it will be good to run at this longer distance on such ground.”

A seven-time Group 1 winner at five, six, eight and, courtesy of a successful defense of his Prix Ganay title, at nine, Cirrus des Aigles has seen this campaign disrupted by injury and exits a respectable fourth in the G1 Prix Royal-Oak over 3100 meters Oct. 25.

“He couldn’t go as he wanted in his last two or three races. In Ireland [for the G1 Irish Champion S.], it was the best field of the year and he was coming back from a stop, so that was a bit too hard. But he’s going up and up now, so I’m optimistic,” Barande-Barbe commented.

So much so that a 10-year-old campaign is not out of the question.

“If he’s well, he’ll go to Dubai and my dream would be to win in Dubai and stop there,” Barande-Barbe said. “But at the same time, I would like him to tell me when to stop, because it’s very hard to retire a horse when he’s 10 and when people look after him all the day long. Sometimes they get depressed, so it’s better and much easier. And at the moment, there’s no need to stop. I’m used to having horses until 10 or so. Sometimes when you put them in the country they get depressed and you have to bring them back. But I am very happy to be here.”

For trainer Eddie Lynam and those around him, Sole Power holds an equally special place.

“He’ll be nine next month, it’s his fourth Hong Kong Sprint, but he thinks he’s two or three, he’s fairly fresh and full of beans,” the conditioner commented, adding that the 8-year-old, who defeated Peniaphobia (Ire) (Dandy Man {Ire}) at his fifth try in the G1 Al Quoz Sprint this past March, is here on his merits..

“It’s no secret that he’s a better horse at 1000 than he is at 1200,” said Lynam. “But we’re hanging onto the basis that he was second in it before [behind Lord Kanaloa in 2013], he put in a good run in the [G1] July Cup [fourth, beaten under two lengths by Muhaarar], we love coming here, the owners love it, it’s a great trip and if you’re invited, why not turn up?”

Lynam thinks these older geldings are good for the game

“He’s has a huge following, he’s a very popular horse,” he confirmed. “The first time it really struck me was when he was at Newmarket a few years ago. He was running in the [G3] Palace House S., which is a 1000-meter sprint on Guineas day. He walked into the parade ring and the fans went nuts for him. He was voted Horse of the Year in Ireland last year. I think because this is such a big business, most fillies and colts are retired to stud prematurely for financial gain.

Lynam added, “When old soldiers like him and horses like [Cirrus des Aigles and Lucky Nine] are still running around, people get attached to them, a bit like national hunt racing, and they hold on to them. For people like us, he’s like part of the family. He’s brought us all over the world. He’s been to Dubai for the Al Quoz Sprint five times, he’s here for the fourth time. Throw in a few Royal Ascots–he’s really been all over the place.”

Many horses don’t make it to a 6-year-old season. Lucky Nine is making an appearance in the Hong Kong Sprint for the sixth consecutive season. Victorious in his second attempt in the race in 2011, Lucky Nine is a two-time winner of the now-defunct G1 KrisFlyer International Sprint in Singapore, went this close to winning the G1 Manikato S. in Melbourne in 2013, has placed in the G1 Dubai Golden Shaheen and turned in some luckless efforts in some of Japan’s top sprints.

Of the trio, he seems closest to the end of the road, but he has shown improvement in his two most recent starts, including a fourth in the G2 Jockey Club Sprint, where he closed to within 1 1/4 lengths of Gold-Fun (Ire) (Le Vie Dei Colori {GB}) at the wire.

None of the trio is a likely winner Sunday afternoon. But regardless of the outcome, these cagey veterans have done the sport proud down the years.