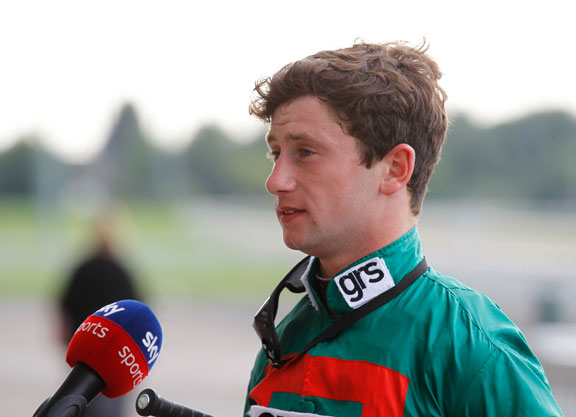 Jockey Oisin Murphy has been banned from race riding for three months by France Galop stewards as a result of a positive test this summer for cocaine metabolites. The ban will run from Dec. 11, 2020 to Mar. 11, 2021 and has been reciprocated by the British Horseracing Authority. The typical ban in such cases has been six months, but the stewards were persuaded to lessen that after receiving hair sample results and a testimony from Murphy that the positive test arose from an unintentional, environmental contamination. The positive sample had been taken on July 19, the day Murphy rode The Lir Jet (Ire) (Prince of Lir {Ire}) to finish second in the G2 Prix Robert Papin at Chantilly.     Murphy, who has denied ever taking cocaine, has said he will not appeal the decision.

“I would like to thank France Galop and the panel of Commissioners for a fair hearing and for accepting the evidence I presented that I had not taken cocaine,” the rider said in a statement. “This evidence included my hair sample results–the results of which I am making public today–and an expert witness statement from an eminent toxicology and anti-doping expert. Whilst I am obviously disappointed that I will still have to serve a three-month suspension, I am pleased the Commissioners accepted the evidence presented and am hugely relieved to have been cleared of taking cocaine.

“I respect the rules of France Galop, respect their decision and will not be appealing. Despite my relief, I regretfully put myself in a situation whereby cocaine has been able to filter into my system through environmental contamination and must live with the consequences. As a professional sportsman I cannot put myself in a similar situation again.

“Even though I have been exonerated from taking cocaine, I would like to take this opportunity to apologise to Sheikh Fahad al Thani, David Redvers and Andrew Balding and thank them for their support. I also want to thank my legal team, particularly Florence Gaudilliere, who represented me in France but also Rory Mac Neice, the Professional Jockeys Association, Johnno Spence and others who have advised and supported me throughout.

“Finally, I would also like to apologise to the whole Qatar Racing team, to the owners and trainers I ride for, my supporters, my weighing room colleagues and to my commercial partners as well as Racing to School. The next three months will give me much time to reflect on my actions, but I will learn from this experience and come back better and even more determined than before.”

Also on Friday, jockey Nathan Evans was banned six months after testing positive for a metabolite of cocaine from a sample given on Aug. 20 at York. Evans has had his licence withdrawn until Feb. 26 next year following a British Horseracing Authority disciplinary panel hearing on Friday, with the suspension backdated to Aug. 27.