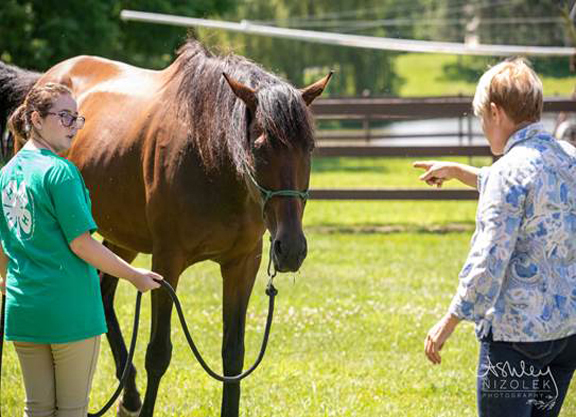 Two consistent themes of Julie Krone’s Junior Jockey Camp at Long Shadows Farm in Cambridge, NY were the importance of good horsemanship and the adherence to the actual rituals and rigors of life at the racetrack. Of course, it wouldn’t be Jockey Camp without Thoroughbreds. The Jockey Camp horses either live at Long Shadows, a horse sanctuary and retraining farm that is the regular home to five off-track Thoroughbreds, or were on loan from Aftercare Continued Thoroughbred Training (ACTT) Naturally, a non-profit that offers its programs at Long Shadows.

Long Shadows’ horses, while regularly handled, were still prepped for weeks so that the camp’s racetrack routine would not be a shock.

“It is my regular practice to teach the horses certain ground work and manners,” said Tabitha Morgan, who manages the horse care and does all the teaching and training for Long Shadows. “Even though they are not ridden every day, they do come up from the field for grooming and regular care by volunteers. So, it is important that they are accustomed to lots of activity as well as being handled.”

Morgan trained and worked with Krone for three years at Old Osuna Ranch in Rancho Santa Fe, CA. She took over management of Long Shadows four years ago and brought her skills in non-resistant training to the rescue operation, which is about 30 minutes from Saratoga Springs. She has had resounding success with horses of all breeds and sizes but feels like she can really make a mark with off-track Thoroughbreds.

“Thoroughbreds are so smart and adaptable,” said Morgan. “With the right handling, they can do absolutely anything. It is fun to see where each one we rescue finds his or her stride.”

The Jockey Camp was a good opportunity to show off how well they can adapt. They were put in their old routine of race training but with young and green handlers. The horses were kept in stalls for the week of camp which is not their normal routine. When it came time to get ready for work, they were tied in the back of the stall, just like at the track. They wore racing tack which was loaned to the camp by trainers at Saratoga Race Course.

The ages and experience of the Long Shadows horses vary greatly. Bad Call (Medaglia d’Oro) is only 6-years-old and, due to an injury, had done very little except race a handful of times. He has been in gradual work over the past year and did remarkably well in the camp.

“He has a naturally calm demeanor,” said Morgan. “But that can throw you off-guard and get you in trouble when he disagrees with the plan. He is a big horse and hasn’t a mean bone in his body but he is still very green.”

The star of many programs at Long Shadows is “Cannon.” Cannon was rescued by Krone and he participated with Krone when she went through her ‘levels’ in the Parelli Natural Horsemanship program. Cannon, who is 17 hands, was considered a rogue when Krone took him over 10 years ago. Now he regularly connects and calms veterans and others in equine-assisted learning programs.

“We call her Anna,” said Morgan of Passaic. “She tries really hard to please everyone and seems to prefer the company of kids. She is particularly good in the YMCA horsemanship camp. She is a lovely mover and seemed to find getting exercised at a nice lope to her liking.”

ACTT Naturally contributed two Thoroughbreds and a lead pony to the camp.

“I could tell that Budder (Three Lions {Hennessy}) and Fuhrious Warrior (Langfuhr) were in shock at first by the routine of being inside and being tied up high in their stall,” said Valerie Buck of the two ACTT Naturally horses in the camp. “But once we got them going in the indoor arena, they settled in. I was incredibly proud of how well they adapted to the different riding abilities of the campers.”

“The camp was a huge success from every respect,” said Morgan. “I was incredibly proud of all of the Thoroughbreds and the campers. Good horsemanship and respect for the horses was the theme throughout the camp in addition to staying safe. I think they all took home life lessons that they will never forget.”

“We are constantly reminded of the intelligence and pleasant demeanor of the Thoroughbred at Long Shadows,” said Arlene Lotters, founder of Long Shadows Charitable Foundation. “We didn’t plan on being so involved with Thoroughbreds when we started the organization, but because so many of the horses needing rehoming are from the track, it turned out that way. They have become the ‘go-to’ horse for our programs where people in need engage with horses. It was a thrill to see our horses doing so well during Julie’s Jockey Camp.”

“As far as the off-track Thoroughbreds go, they like having something to do and I would like to give them more opportunities to show off their adaptability,” said Morgan. “Our next projects at Long Shadows are Equine Gestalt for veterans and a special Groom Elite training class. We are going to train trainers and have a special curriculum for veterans to come and learn the trade of caring for horses so that they can get jobs at farms and the track if they desire.”

Diana Pikulski is a partner at Yepsen & Pikulski and editor of the Thoroughbred Adoption Network.