Off the Tracks Totally On Track in Gulfstream Return 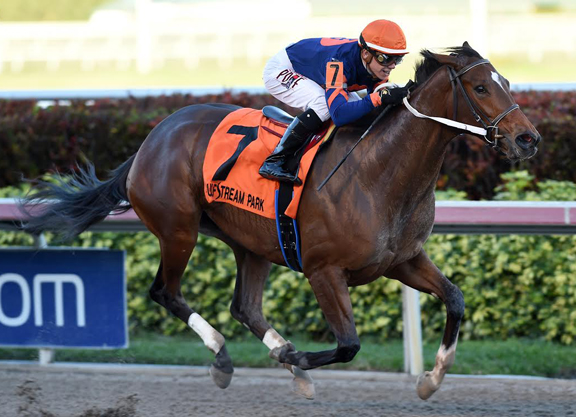 Margins: 4 1/4, HD, HF. Odds: 1.90, 13.40, 12.80.
Also Ran: Ballet Diva, Tap to It, Always Thinking, Disco Rose. Scratched: April Gaze.
Off The Tracks, winner of last term's GIII Schuylerville S., returned to the races a winner to remain unbeaten in Gulfstream's Sunday afternoon feature. A first-out graduate going five furlongs at Gulfstream June 13, the bay added a win in Saratoga's opening day fixture July 24 before being sidelined for the remainder of the year. Sent postward as the second choice as GI Spinaway S. runner-up Tap To It (Tapit) took the heaviest support, the bay was away in good order and was perched on the outside tracking the pace as Ballet Diva (Hear No Evil) led through a quarter in :22.97 and a half in :45.65. Momentarily ceding an extra length to that rival on the turn, Off the Tracks re-found her best stride turning for home, collared Ballet Diva in the lane and moved away to notch a convincing score. Sugar Cone rallied to complete the exacta, while Tap to It reported home fifth. The winner, who sold for $50,000 as a Keeneland September yearling, is a half to GII West Virginia Derby and GIII Iowa Derby winner Concord Point. Her dam was most recently bred to Awesome Again. “I was very impressed,” commented winning trainer Roderick Rodriguez, who added that his ultimate goal with Off The Tracks is the GI Kentucky Oaks via a likely stop in the GII Gulfstream Park Oaks Apr. 2. “The pace was so fast that I was afraid it was going to take a toll on her at the end, and Tap to It closes fast. But, she's just an incredible filly. The sky's the limit with her.” Click for the Equibase.com chart or VIDEO, sponsored by Fasig-Tipton.