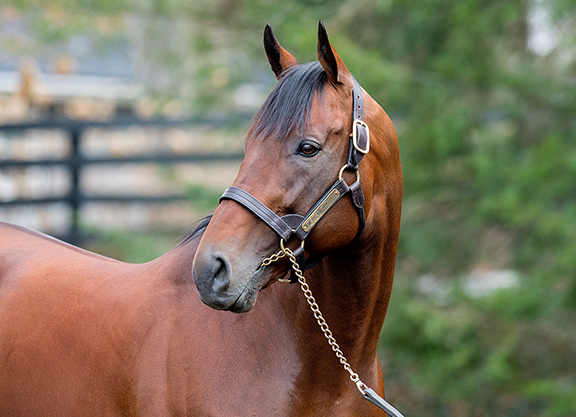 “He's a well-made horse. He's a good moving well-balanced kind of horse so he wasn't hard to pick out,” Pletcher said. “He's a colt that we've seen improve steadily all summer. Obviously, he's bred to be a two-turn horse. Hopefully he finishes up well and builds off of this.”

Also making his first start here is Chiefswood Stables homebred Weyburn (Pioneerof the Nile). The Jimmy Jerkens trainee boasts a string of speedy worked, capped by a best-of-49 half-mile in :47 1/5 at Belmont Oct. 3. A half-brother to GSW Yorkton (Speightstown), he hails from the family of champion Sky Beauty (Blushing Groom {Fr}). TJCIS PPs

China Horse Club and WinStar may have another superstar on their hands in 'TDN Rising Star' NASHVILLE (Speightstown), who tries winners for the first time here. The $460,000 KEESEP purchase went wire-to-wire in his unveiling in the Saratoga slop, devastating the field by 11 1/2 lengths and earning a gaudy 91 Beyer Speed Figure. He enters off a pair of bullet drills, most recently covering three furlongs in :36 1/5 (1/4) at Keeneland Oct. 5. TJCIS PPs

HALF TO DONNA VELOCE DEBUTS AT KEENELAND

Bret calhoun unveils a half-sister to Grade III winner and MGISP 'TDN Rising Star' Donna Veloce (Uncle Mo) in PEACE BROKER (War Front). Their second dam is GI Breeders' Cup Juvenile Fillies winner Cash Run (Seeking the Gold). Klaravich Stables went to $475,000 at KEESEP for Equal Pay (Quality Road) and she debuts here for Chad Brown. She is out of the unraced mare Street Rumor (Street Sense), who is a half to stakes-placed Valiancy (Tale of the Cat) and Havana Moon (Malibu Moon). TJCIS PPs