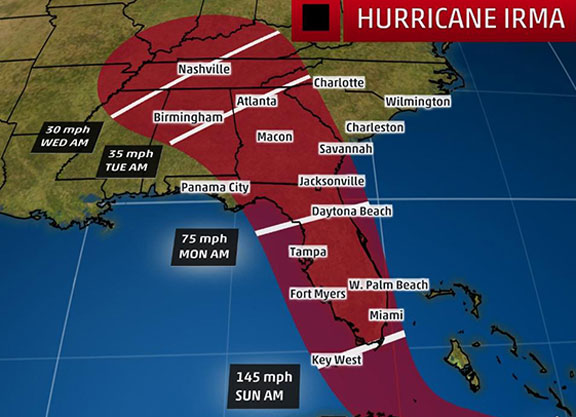 While Hurricane Irma is expected to do its worst damage in Florida in the Miami and Dade County areas, it appears that Ocala, located in Marion County, is not going to be spared. The latest forecasts are calling for Irma to hit the Ocala area early Monday and to bring with it winds of up to 100 miles per hour. That has farm owners and other horsemen, many of whom have taken in horses fleeing Gulfstream, busily preparing to do everything they can to keep their horses, employees and property as safe as possible.

“Our barns are really strong structurally,” said Glen Hill Farm President and CEO Craig Bernick. “We have had hurricanes where we’ve lost power for a couple of weeks. We have generators and we have wells on the farm. We can feed the horses and take care of them. I think this will bother the people more than the horses.”

Ocala Stud sold its first crop of 2-year-olds in 1958, so the team there has plenty of experience dealing with difficult weather situations in Florida. Michael O’Farrell, who runs the operation with his sons, says the horses have an innate ability to handle storms on their own, one of the reasons why many horses at their Ocala farm will spend the storm outside.

“The horses that are outside are in great shape,” he said. “They are smart and they weather storms pretty good. They’ll find the lowest spots in field, they’ll lay down with their butts to the wind or they’ll stand up with their butts to the wind. They gravitate to the lowest area in the field and they handle it. The ones who are out, that’s the safest place to be. If you’re in a barn, trees can blow down on the roofs, which scares the horses inside and that’s when they get hurt. In most cases horses are better off out than in.”

O’Farrell said horses in training will not be let outside for the storm.

“With the horses we have in training, you can’t just all of a sudden turn them out; they’re too fit and will run like hell and hurt themselves. The ones that stay out are broodmares and the yearlings that aren’t going to sales. They’re normally out 22 hours a day anyways, so they are used to being out.”

While Ocala will be far from the ideal place to weather the storm once Irma hits, most feel it is a better alternative than staying in South Florida. Gulfstream has ordered the evacuation of nearly 750 horses from its backstretch and many have showed up in Ocala. Tom Ventura, the president of the Ocala Breeders’ Sales Company, said 400 stalls on the sales grounds have been promised to horsemen fleeing from the south. He did not know, however, if all 400 will show up, as some horsemen have told him they have changed their minds and are going to keep their horses at home.

“We’re fielding calls from people constantly and we are trying to be a safe haven for people,” he said. “It’s been a real challenge for people to get here from Miami. It usually takes about four hours and one guy said it took him 8 1/2 and I hear others have had a worse time. Everybody here is prepared and everybody is cognizant that this has the potential of being a very serious storm, the most significant hurricane to hit Ocala since I have been here. We have had storms here in the past and have always come out of them in pretty good shape. We have very strong block barns.”

Randy Bradshaw, who runs a training and breaking facility in Ocala, has taken in 12 show horses from Wellington.

“We’re just hoping it goes in a different direction, out into the Atlantic,” Bradshaw said. “There’s not a whole lot you can do. You just prepare and do the best you can. One good thing about Florida is it can take a lot of water and then in a day or two it dries up. That helps. I think we’re as prepared as we can be.”

Each of the individuals interviewed by the TDN said they are well stocked on gasoline, water and food for the horses, all things that are essential and can become scarce during a hurricane. If the storm lives up to expectations, it is likely that many of the farms and training centers will lose power.

“Our corner gas station has been out of gas for a couple of days,” Bradshaw said. “Luckily, we’ve got everything filled up and I have a 150 gallon gas tank here on the farm, which we’ve filled up. That’s for the generators. I’ve even got a jet ski if the water gets too deep. Let’s hope I don’t have to use that.”

The weather reporters are still debating about when the storm will hit Ocala and how strong it will be. But it’s coming.

Marianne Siegel, a small breeder with three mares, knows that because her horses are telling her so. She plans to keep her three mares in a large open paddock during Irma.