Obviously Holds On in Turf Sprint 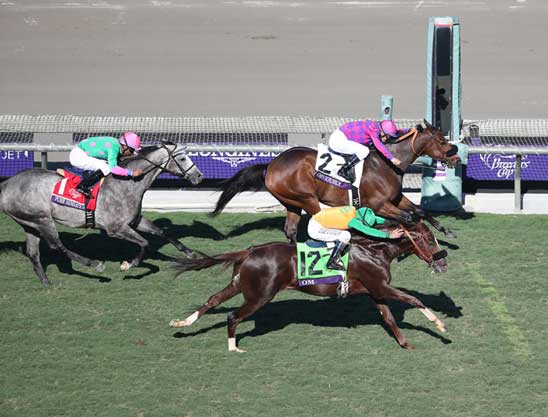 Obviously (Ire) (2) just holds off Om on the wire | Horsephotos

Obviously used his ample speed to take it to them early and tired late before finding the wire just in time to score in the GI Breeders' Cup Turf Sprint, his third top-level victory.

Kicking off his 8-year-old campaign off with a pair of neck seconds in the GII San Gabriel S. and GII Arcadia S. Jan. 2 and Feb. 13, respectively, the gelding dominated the GIII Poker S. June 18 at Belmont and most recently ran third after setting a supersonic pace in the GII City Of Hope Mile here Oct. 8. Contesting the GI Breeders' Cup Mile in each of the last four seasons, Obviously made his first start going down the hill at Santa Anita since finishing second in the April 2013 GIII San Simeon S.

Going clear through a :21.41 quarter after not the sharpest of starts, the race favorite turned up the heat through a :43.08 half-mile and spurted away by the eighth pole. Appearing home and hosed passing the sixteenth marker, Obviously got a bit leg-weary in the final 100 yards, but had just enough in reserve to hold off the strong kick of Om for a narrow tally. Pure Sensation was third after stalking the pace of the winner from the inside. Obviously's win represented the first Breeders' Cup triumph for California's leading trainer Phil D'Amato.

“This is tremendous,” said D'Amato. “A (first Breeders' Cup) win for me and for my old boss Mike Mitchell, who had the horse before me.” Added victorious pilot Flavien Prat: “I got a good trip. He didn't break well like he does every time, but when I sent him and he got the lead, he got comfortable. I asked him before the dirt and he went on. He got a little tired but the wire was there.”

Om, who edged out Obviously when second in the City Of Hope, had trouble at the start and didn't get uncovered until just too late. “He got wiped out leaving the gate, which he did to himself, and it was a tough beat,” said rider Gary Stevens. “He broke completely sideways from the gate and he had to overcome a lot. Almost got it done.” Om's trainer Dan Hendricks offered: “He missed the break slightly and had to make up a lot of ground on a really good horse. We can't be prouder.”

The winner's unraced second dam is a full-sister to MGISW Hawkster, who set a world record of 2:22.80 for 1 1/2 miles on turf at Santa Anita in winning the 1989 GI Oak Tree Invitational H., French MSW/G1SP Silver Kite, GSW-Fr/G1SP-Ire runner Silver Lane and Lightning Arrow, who was MGSP in the UAE. Third dam Strait Lane is a half to MSW and 34-time winner Kilmoray (War Admiral), SW Lone Bird (Jester) and MSP runners Guadalcanal (Citation) and Dream of Kings (Saidam). Leala is responsible for a yearling filly by Excelebration (Ire) and was barren this spring after being bred to Teofilo (Ire).