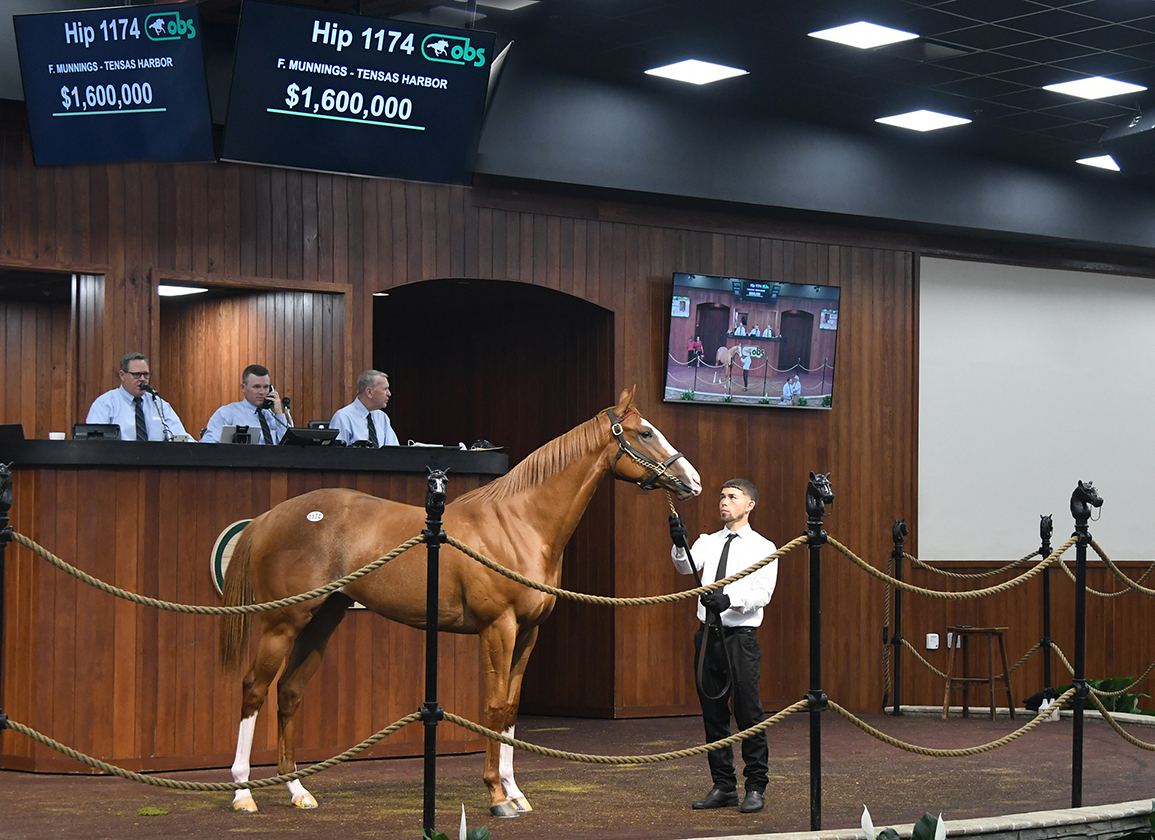 “It was a heck of a horse sale,” OBS Director of Sales Tod Wojciechowski said at the close of business Friday. “There were gains and records on all fronts. And, I believe, it's the first time we've ever sold at least one million-dollar horse on every day. You can't say enough about the quality of horses that the consignors brought and the buying bench that showed up, across the board–internationally and domestically. There was great participation on all fronts.”

Friday's final session of the Spring sale was topped by a filly by Munnings who became the auction's fifth seven-figure juvenile when selling for $1.6 million to Larry Best's OXO Equine. The sale's overall top price came during Tuesday's first session when a colt by Uncle Mo sold to Amr Zedan for $2.3 million. It was the first time the Spring sale had produced a sale over $2 million since 2017.

“April has become the go-to 2-year-old sale,” Wojciechowski said. “It's proven itself over and over again. Horses go win all over the world, over all different surfaces, and there is quite an array of different levels for them to shop.”

“I thought at the March sale, I had never sold in a market like it before,” Woods said. “Ten years ago, if you told someone there would be half a dozen seven-figure horses in the April sale, they'd lock you up. It used to be just a sale, but it's grown and grown and grown. It's the [Keeneland] September [Yearling] Sale of 2-year-old sales. It's fabulous.”

Chad Schumer was the Spring sale's leading buyer, purchasing 15 head for $3,030,000. The success of the April sale reflects a worldwide demand for horses, according to Schumer.

“I do some pinhooking in Europe at the breeze-up sales and we sold in Dubai, I think the same thing is true everywhere. People want horses,” Schumer said. “We are out of COVID now, people want to get back to life and enjoy themselves. They want to spend money. And in the U.S., the prices are justified by the purses. There are $100,000 maidens at Keeneland, Churchill and New York. California is not far behind and I understand Louisiana is going to jump up. And Kentucky Downs is $130,000. You buy a horse here for $250,000 and you win two races and you're out. It's never been like that before. So people really have a chance.”

Schumer continued, “I also think–with all due respect to some of the big buyers of the past–they are not buying as much as in the past and I think a lot of people, especially in America, feel like they have a real chance to buy what they want. If you look at the results sheets, there is a deep bench of buyers. It's not one person or one country, it's a very diverse buying bench. And they've done a wonderful job putting this catalogue together. There is something here for everyone.”

Woods and Munnings, a Winning Combination

Eddie Woods was quite successful with Munnings fillies last year. He sold now-Grade I winner Eda for $550,000 at the OBS March Sale and sold undefeated G3 UAE Oaks victress Shahama for $425,000 at last term's April sale. The horseman hit another homerun courtesy of a Munnings filly Friday when Hip 1174, a $250,000 KEESEP buy, summoned a whopping $1.6-million from OXO Equine's Larry Best. Bloodstock agent Christina Jelm acted on behalf of Best, who was not in attendance.

“Munnings has obviously been very good to me over the years,” said Woods. “He is a great stallion and has been appreciated in recent years. That filly was amazing. I was shocked at what she brought to be quite honest. I thought she'd get to $1 million, but here comes Larry Best, and when he wants one, he wants one. She is the only 2-year-old he bought this year and I hope she turns out for him. He's a great client of mine anyway. He kind of snuck in under the radar. I didn't see him coming.”

Jelm preferred to remain out of the spotlight, deferring comments on the filly to Best, but did say, “She's tall, elegant, fast and eye-catching. Larry wanted her, and I was just helping him out.”

Bred by the Cantrell Family Partnership, Hip 1174 is out of hard-knocking, six-time Louisiana stakes winner Tensas Harbor (Private Vow). The flashy chestnut breezed in a swift :9 4/5 for Woods during the under-tack show.

“She's a wonderful filly,” Woods said. “She's been a class act from day one, from the first time I looked at her in Lexington at Woodford. I've been lucky buying off Woodford, too. It's been a pretty good journey.”

A filly by Justify (hip 1139), who was bought back by breeder Diamond Creek Farm for $325,000 at last year's Fasig-Tipton October sale, sold for $800,000 when returned to the ring at OBS Friday. Bloodstock agent Chad Schumer, acting on behalf of an undisclosed client, made the winning bid on the juvenile.

“Obviously, it's the first crop of a Triple Crown winner,” Schumer said. “Of course they are going to be in demand. He is the son of a sire of sires, unbeaten, there is so much excitement about his first crop. The filly was absolutely lovely. She had a great breeze (:21 1/5), a great physical, and she vetted well.”

“Mike Akers bought her back for Diamond Creek Farm,” Wavertree's Ciaran Dunne explained of the yearling result. “They thought she would be a better 2-year-old than she was a yearling. Obviously they were right.”

Susie's Baby, in foal to Constitution, sold for $600,000 at this year's Keeneland January sale.

Hip 1139 is another in a line of juvenile sales success stories who had originally been targeted at the yearling sales.

“I think that breeders are getting smarter about the type of horse that they retain,” Dunne said. “For the longest time, they had the preconceived notion that small, quick horses would be perfect for the 2-year-old sales. And I think some of them have now realized that we need two-turn type horses. I think they are being more selective about what they send and I think that's why you are seeing the better results.”

Schumer, bidding on behalf of the same client, purchased a colt by Goldencents (hip 546) for $535,000 during the second session of the Spring sale. After that Wednesday purchase, Schumer said he hoped the competitive market he was buying into continued Thursday when he would be selling.

Asked Friday how the change of hats went, Schumer said, “I sold really well. I was a little shocked by how well we sold. We had a Malibu Moon (hip 924) we bought for $30,000 as a yearling [at Keeneland September] and we knew he would sell well. He was a lovely colt and a great mover and he was well-prepared by the consignor. But [the $330,000 sale] was literally about double what I expected.” @JessMartiniTDN

After his first racehorse Call Me Midnight (Midnight Lute) (an $80,000 OBSMAR buy) put him on the GI Kentucky Derby trail with a win in the GIII Lecomte S. earlier this year, new owner Ben Gase was eager to tackle this year's juvenile sales. His trainer Keith Desormeaux represented him in Ocala this week, securing three horses, topped by a $650,000 daughter of Bolt d'Oro (Hip 1017).

“I'm usually the guy buying the ones under the radar,” said Desormeaux. “Ben Gase is a new, very excited owner. He bought his first horse last year at the March Sale, a horse called Call Me Midnight, who was on the Derby trail. He really got excited about it, enthusiastic, and decided to open up his checkbook.”

Bred by Spendthrift Farm, Hip 1017 is out of Australian MSW & MGSP Scorpio Queen (Aus) (Choisir) and hails from the family of Aussie G1SW Toledo. The bay breezed in :9 4/5 for the de Merics.

“That's the easiest buy I've ever made,” Desormeaux said. “She was awesome. I don't have one complaint about her. We come to the 2-year-old-in-training sales because we can see them at work. We can see how they handle it mentally and physically. She just passed all the grades. She blew my socks off.”

Eaton's Reiley McDonald purchased the filly for just $35,000 under the name of his farm Athens Woods at Keeneland September. —@CDeBernardisTDN

Hootie Moore had upwards of 30 horses in training a few years ago, but with the pandemic he cut his numbers back dramatically. The Arkansas-based owner was restocking this week at OBS where he purchased a filly by Connect (hip 1091) for $550,000 from the consignment of Eddie Woods Friday.

“We liked everything about her,” Moore said of the juvenile. “She's the one we've been waiting on the whole sale. Everything is costing a lot more than it should, but we went ahead and we'll see.”

The filly, who worked a furlong last week in :10 flat, is out of stakes winner Special Dream (Officer) and is a half-sister to stakes placed Momameamaria (Quality Road).

“I have had up to 35 horses, but during COVID, I like to go on the backside, so I went down to almost nothing,” Moore said.

Grassroots Powers Through at OBS

David McKathan and Jody Mihalic's Grassroots Training and Sales served notice it was in line for a strong Spring sale with a series of bullet workers during the under-tack preview and the operation duly delivered in the sales ring this week, ultimately selling all 40 juveniles it sent through the ring.

Grassroots horses found plenty of buyers in the middle market in Ocala.

“I think everybody is getting shuffled up as the economy goes and the overall dollar value has marked everything up so much,” Mihalic said. “So everyone has had to step up a little bit into that middle market.”

Of the operation's perfect strike rate, Mihalic said, “It's fantastic. And now I have 40 more heading to Maryland.” @JessMartiniTDN

Into Mischief Filly Returns to Her Breeder

Breeder Robert S. Evans sold his Into Mischief filly out of Squeeze (Lemon Drop Kid) to the Recio's Lynwood Stable for $150,000 at Keeneland September. But, when she returned to the auction ring at OBS Friday, he decided he had to have her back, going to $525,000 to secure Hip 1097. Trainer Kent Sweezey bid on his owner's behalf.

“She worked really well [:9 4/5],” Sweezey said. “She's gorgeous. He loves the family and the way she moved. Gene Recio gave us the thumbs up. She's a queen, so we will see how she runs. She will probably come with me to Palm Meadows or Monmouth with a goal of running at Saratoga.”

Evans bought Squeeze for $350,000 at Keeneland September and this filly is her second foal. Squeeze is a half-sister to GSW Ocho Ocho Ocho (Street Sense) and GSP Private Ensign (A.P. Indy).

The Recios had another pinhooking score just a few hips earlier when a Java's War colt (Hip 1092) they purchased for $72,000 at the Fasig-Tipton October Sale brought $175,000 from Joseph Graffeo.

“She was just a really good individual,” Recio said. “She didn't turn a hair wrong the whole time we had her. She was as straight-forward of a 2-year-old sales horse as I've ever had. Whenever you meet the magic :9 4/5-:10 flat number for a filly with that kind of quality pedigree, you hope for a price like that, but you never expect it. We are very thankful.” —@CDeBernardisTDN