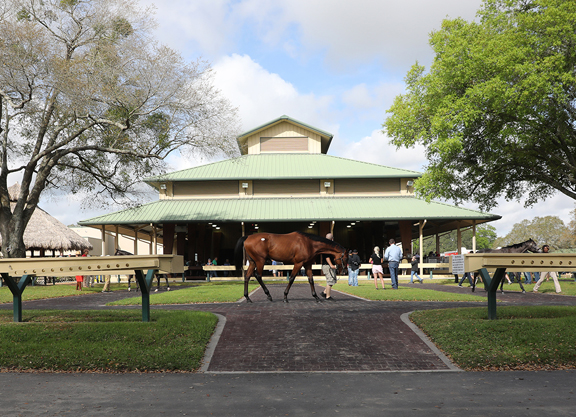 The Ocala Breeders' Sales Company's Spring Sale of 2-Year-Olds in Training, which was delayed until June in 2020 due to the pandemic, returns to its traditional spot on the calendar when it begins its four-day run in Central Florida Tuesday.

“It feels good to have April back in its normal slot,” agreed OBS Director of Sales Tod Wojciechowski.

OBS opened the 2021 juvenile sales season with a competitive renewal of its March sale last month which featured frenetic bidding through a wide swath of the market.

The March sale included a strong middle market. If that trend is to continue at the Spring sale, it will have to do so with the ongoing absence of Korean buyers, who have helped drive the middle market in recent years. South Korea currently has an embargo on importing foreign racehorses as a way to counteract the economic impact of the pandemic on the country's breeding industry.

“I see promise [for the middle market],” Wojciechowski said. “If the demand that we saw in March continues, that will certainly help things. We are going to miss the Korean buyers, but I think we have the capability to pick up that slack.”

OBS hosted a rain-shortened six-session under-tack show last week. The company was forced to cancel the first day of the show due to stormy weather, but added horses each day of the remaining days to compensate. The start of Saturday's final session was delayed over an hour by rain.

“It's April and it sometimes rains in April in Florida, as we all know,” Wojciechowski said. “But fortunately, we had built in a little extra time. The initial plan was to breeze over seven days, but we had that opportunity that if we were presented with a situation like we had on Sunday we could adjust and overcome it. And we got very lucky Saturday, there was rain all around us and rain early in the morning, but we were able to pull it off.”

During the under-tack show, a pair of fillies by first-crop sires earned the quarter-mile bullet of :20 2/5; a daughter of Classic Empire (hip 317, video) and a daughter of Cupid (hip 576, video). Twenty juveniles shared the week's fastest furlong time of :9 4/5.

With 1,217 horses catalogued for the four-day auction, buyers were spread out over the entire OBS backstretch during a busy day of showing around the raindrops Sunday.

“We are dealing with some rain, but in between the rain you see a lot of horses out around the barns and a lot of people looking,” Wojciechowski said. “We have 1200 horses on the grounds and there are horses in all 29 barns. The horses aren't as concentrated in one area, so sometimes it may not look like there are that many people. But there sure are a lot of people out here looking.”

A Top Line Sales-consigned filly by Not This Time topped the 2020 Spring sale when selling for $1.35 million to bloodstock agent Gary Young on behalf of Zedan Racing. Named Princess Noor, she won last year's GI Del Mar Debutante S. The filly was one of two to bring seven figures at the auction. In all, 634 head sold for $57,715,000 for an average of $91,033 and a median of $50,000.

The OBS Spring sale will be held Tuesday through Friday, with bidding beginning each day at 10:30 a.m.