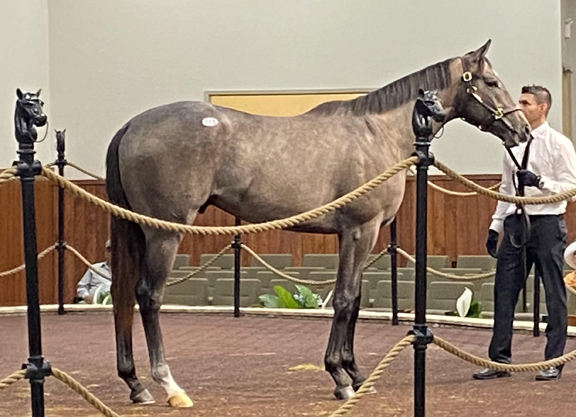 The big sales results from the first crop of juveniles by champion Gun Runner (hip 118) continued Tuesday at OBS when a son of the Three Chimneys stallion sold for $850,000 to the bid of bloodstock agent Donato Lanni, acting on behalf of Michael Lund Petersen. The gray juvenile will join the $1.7-million son of Gun Runner purchased by Amr Zedan at last month's Fasig-Tipton Gulfstream Sale in the Southern California barn of trainer Bob Baffert.
“He's a beautiful horse,” Lanni said. “Just a cool horse. He did everything he was asked to do and came out of in really good shape. We are just happy, happy, happy to get him. He was the horse we wanted to go home with.”
Of the colt's final price tag, Lanni said, “It's the same thing every year. We all land on the same horses. There is no stealing. It's tough to buy them.”
The colt, who worked a furlong in :10 flat at last week's under-tack show, is out of graded placed Salamera (Successful Appeal) and was consigned by Barry and Shari Eisaman's Eisaman Equine and was bred by the couple's Eico Ventures.
“Barry does a great job,” Lanni said. “He's a good horseman and I'm happy they bred a nice horse.”
The sale was a highwater mark for an Eisaman homebred.
“He is a wonderful horse and we thought he was going to sell well,” Shari Eisaman said as the couple received congratulations out back. “I was going to be thrilled with $500,000. This is the most I've ever sold a homebred for–the homebreds have paid for the farm, they've paid for everything. Thank the Lord.”
The Eisamans purchased Salamera for $300,000 at the 2016 Keeneland November sale. The 11-year-old mare, who was second in the 2012 GII Adirondack S., has an Uncle Mo yearling and she was bred back to Malibu Moon last year.
“Absolutely,” Eisaman said when asked if the result was extra gratifying with a homebred. “When you own the factory, your mares are working when you're sleeping.”