O'Brien To Send Two To Saudi 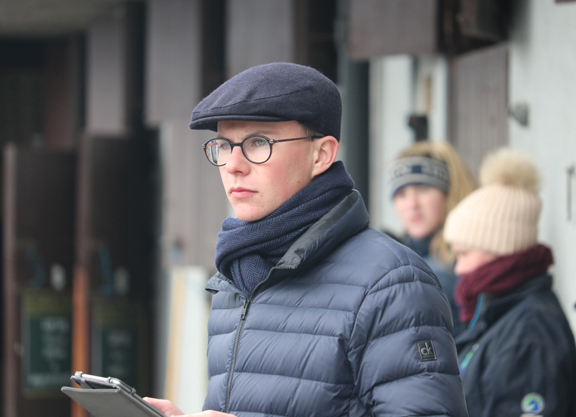 Joseph O'Brien has already collected an impressive haul of international trophies in less than seven years with a trainers' license, including two Melbourne Cups and a Breeders' Cup, and he will look to expand that collection when sending Baron Samedi (GB) (Harbour Watch {Ire}) and Thunder Moon (Ire) (Zoffany {Ire}) to next weekend's Saudi Cup card.

LECH Racing Limited's 5-year-old Baron Samedi rose rapidly through the ranks after being gelded in 2020, with four straight handicap wins followed by victory in the G2 Prix du Conseil de Paris, and he picked up where he left off last year, winning the G3 Vintage Crop S. at Navan before traveling to America to take the GII Belmont Gold Cup S. over two miles. After finishing third in the G1 Irish St Leger, Baron Samedi was last seen checking in sixth in the G2 British Champions Long Distance Cup, and he lines up in the Red Sea Turf H.

“He's a good, solid horse who just keeps progressing and always seems to turn up on the day,” O'Brien said. “He seems in good form at home and this is the race we've always had in mind to start him off this season. We've had some great days around the world so far and this looks a really good opportunity to have a go at a big pot again.”

“It looks as if those middle distance to staying races are where we will run him this season. He might perhaps prefer a little shorter than the trip in Saudi, but it's a tight enough track and I think the trip should be OK for him. He won on a tight track in America in that Grade II last year, so he's proven he can handle this sort of test and I'm hopeful he'll run very well.”

Chantal Regalado-Gonzalez's Thunder Moon is on a recovery mission; he won the G1 National S. at two, but was beaten in all six starts at three last year, albeit finishing second by a head in the G1 Prix Jean Prat. Thunder Moon filled the same position in his seasonal reappearance at Dundalk on Jan. 21. Thunder Moon is set for the 1351 Turf Sprint.

“He was unlucky not to be a Group 1 winner last year having been beaten a head in France and if he gets a good draw, we'd be hopeful he could run into some prize money,” O'Brien said. “I think it's fair to say he's not the most consistent, but on the pick of his form he's not without a chance, and I think we've finally found his optimum conditions.”