Oasis Dream's Native Trail Completes The Bluewash In The Dewhurst 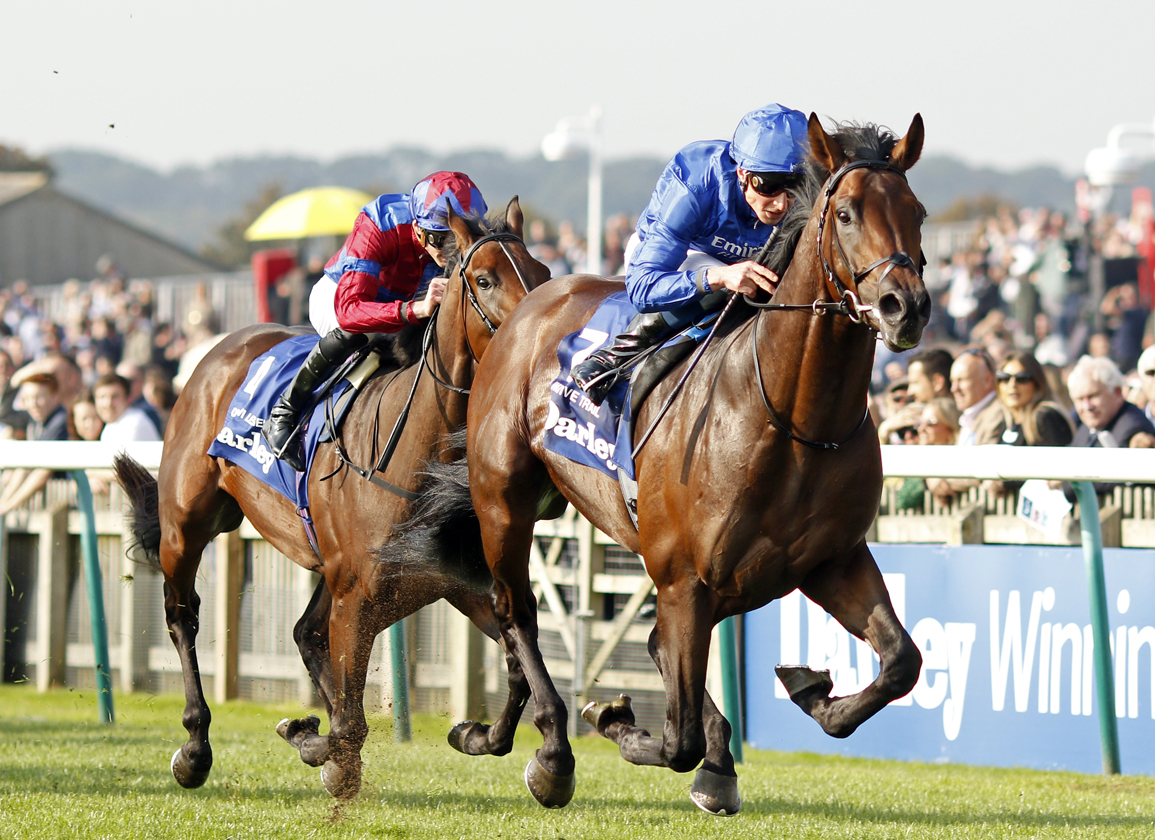 By the time the G1 Darley Dewhurst S. loomed on Saturday, there was a keen sense of inevitability to the outcome and Native Trail (GB) (Oasis Dream {GB}) kept to the script to complete Godolphin and Charlie Appleby's rout of Newmarket's Future Champions Day card. Already the keeper of the generation's bragging rights having collected the G2 Superlative S. at the July Festival here and the G1 Vincent O'Brien National S. at The Curragh Sept. 12, the bay had one more mission to complete and did so with his now-customary professionalism to take an unbeaten record into the off-season. Settled in behind the TDN Rising Stars Straight Answer (GB) (Kodiac {GB}) and Dubawi Legend (Ire) (Dubawi {Ire}) throughout the early stages by William Buick, the 5-6 favourite was in a pocket with the field having congregated against the stand's rail. Needing his usual niggling to prepare for engagement three out, he responded to hunt down the keen-going Dubawi Legend heading downhill and overhauled that rival 150 yards from the post. Dubawi Legend stuck at it to ultimately be beaten just two lengths, as Bayside Boy (Ire) (New Bay {GB}) stayed on to be half a length away in third. “It was a messy pace and messy race and we ended up on the stand's rail, but wherever I asked him to go he went and he hit the rising ground really well,” Buick said. “It's nice to back up his National Stakes win in the Dewhurst, which is the most important 2-year-old race and I think he'll be just as effective or more so over a mile next year. He wouldn't look out of place in a 3-year-old race now–you want to see how he comes out of these races, he's a real man you know.”

With the benefit of hindsight, Native Trail's debut performance at Sandown June 11 looks even stronger now that the four-length runner-up Royal Patronage (Fr) (Wootton Bassett {GB}) has gone on to beat some of this card's leading protagonists in both the G2 Royal Lodge S. and G3 Acomb S. Upstaging Masekela (Ire) (El Kabeir) in a tight finish to the Superlative, Godolphin's top dog gunned down Ballydoyle's unbeaten TDN Rising Star Point Lonsdale (Ire) (Australia {GB}) in the National to take on extra gravitas and may not have needed to fully repeat that form to double his group 1 tally here. “He's a gorgeous horse with tonnes of ability,” Buick added. “You wouldn't have expected them to come stand's side, but I did anticipate a tactical race and knew he would pick up once he got daylight. He's deservedly champion 2-year-old and could be absolutely anything. He minds himself at home and brings it on in the afternoon.”

What will emerge from elsewhere to challenge his pre-eminence in the 2000 Guineas next spring is unknown at this stage, but it could be that despite his impeccable credentials Native Trail is not even the best 2-year-old in his own stable. Debates will rage throughout the winter as to whether the preceding G3 Autumn S. winner Coroebus (Ire) (Dubawi {Ire}) is the better of the pair, but for now Native Trail has the big title belts all to himself. “Had he not won the National Stakes in similar fashion, I would probably have been a bit twitchy passing halfway but knowing how this horse operates I was comfortable enough,” Appleby said. “He wasn't doing a stroke and was just going through the motions. One thing is for sure, he was not going to stop galloping once he got going and the way he accelerated there when really given the office was quite remarkable.”

“I can't see him getting any further than a mile personally, but he's an exciting Guineas horse along with Coroebus,” the Moulton Paddocks handler added. “His work at home prior to the National Stakes, you wouldn't be getting too excited but he's that sort of horse, he warms into a race and does it all the right way round and that's what we saw again today. There's a lot more to come, you'd like to say, but he is unbeaten with two group 1s. I'm not going to get too carried away. He's a big boy, 540 kilos, and came in at that weight from the breeze-ups. Full credit to the team who purchased him and Norman Williamson who consigned him. Since then, Norman has taken a keen interest.”

“Norman said after the National Stakes he still didn't know what he was doing and he was correct, because his work at home wasn't too exciting but he warms into a race and does it the right way round. I've never put him anywhere near Coroebus at home–they are different types. Coroebus travels very well and has a smart turn of foot, whereas this horse does things in a different manner.”

The second dam New Orchid (Quest For Fame {GB}), who was third in the G3 Lancashire Oaks, is a daughter of Musicanti (Nijinsky II) who also produced the 1999 Dewhurst hero and sire Distant Music from a mating with Observatory's sire Distant View. Musicanti is kin to the GI Jockey Club Gold Cup, GI Washington D.C. International and GI Suburban H.-winning champion Vanlandingham (Cox's Ridge) and to the dams of the GII Keeneland Turf Mile and G2 Prix Eugene Adam-winning sire Kirkwall (GB) (Selkirk) and to the GI American Oaks heroine Funny Moon (Malibu Moon). From the family of the GI Belmont S. hero and sire Temperence Hill, Needleleaf's yearling filly by Calyx's sire Kingman was bought by Godolphin for €950,000 at the Arqana Deauville August Sale. She also has a filly foal by Siyouni (Fr).