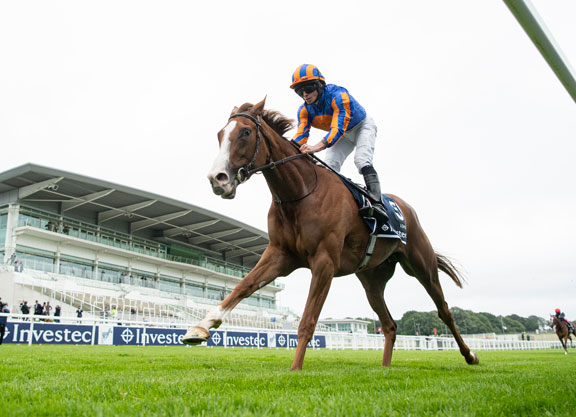 Already an emphatic winner of the G1 1000 Guineas, Coolmore’s Love (Ire) (Galileo {Ire}) entered elite territory on Saturday with a nine-length romp in the G1 Investec Oaks at Epsom. While not quite in the arena of the 12-length 1983 heroine Sun Princess (GB), this winning margin equalled that of the 1996 heroine Lady Carla (GB) (Caerleon) and there have been only four fillies in this race’s history to have won by further. Settled behind a duo among the main six-strong group racing adrift of the runaway pacemakers Tiempo Vuela (GB) (Lope de Vega {Ire}) and Passion (Ire) (Galileo {Ire}) early, the chestnut moved forward to swamp stablemate Ennistymon (Ire) (Galileo {Ire}) approaching two out. Powering clear from there, she led home another one-two for Ballydoyle as Ennistymon held off Frankly Darling (GB) (Frankel {GB}) by 3/4 of a length for the runner’s-up spot. “She is very special I think,” Moore said of the 11-10 favourite. “She was exceptional today. We always thought she was very good, she proved that in the Guineas and took another step forward. She loved the trip and one of her best furlongs was her last. She couldn’t have been any more impressive. You never expect to win an Oaks by that far.”

Campaigned over seven furlongs on her first six starts, Love was fourth at Leopardstown and second at The Curragh in June before heading back to the former venue the following month to break her maiden and add the G3 Silver Flash S. to her rally. Only fifth a month later in the G2 Debutante S. back at The Curragh in August, she may have been undermined by the rain-eased ground there and was duly back in dominant mood when annexing the G1 Moyglare Stud S. also there in September. Taken to Newmarket for the G1 Fillies’ Mile, she was 1 3/4-lengths third to Quadrilateral (GB) (Frankel {GB}) when again the ground was riding on the soft side of good but conditions were ideal on her return last month for her first Classic date.

That four-length win in the June 7 Newmarket Classic marked her out as of distinguished class, but this powerful display was something else. While it was a strange race tactically, with Tiempo Vuela and Passion harrying each other into setting an unsustainable pace and the Ribblesdale winner Frankly Darling never looking happy on the track, Love was in a league of her own virtually the whole way. Seamie Heffernan made the first move when steering Ennistymon down the descent on the rail, but Moore always had her covered and while the first three in the market came away from the rest it was Love who ended the contest in isolation.

Aidan O’Brien, who was registering an eighth victory in the Classic, commented, “Before the Guineas we were aware that it was a little bit short for her–we always thought she would get a mile and a quarter well and obviously she is by Galileo and has a lovely, long, low action. As you see she is very genuine, sticks her head out and really tries very hard, so we were always hoping that the extra distance was going to improve her, and we were absolutely delighted with the result.”

“She was working incredibly well,” he added. “Her last few canters through the week were incredible, really, so although we obviously didn’t know what was going to happen, we were aware that she was incredibly well. We are in a very privileged position to have such horses to train and an incredible group of people, both here and in Coolmore, and everybody involved. Love is very special. It is very hard to say you would ever have a better filly than her–we saw what she did in the Guineas. We will wait and see what is next and the lads will decide that, but obviously the Irish Oaks is a possibility. We will see how she is over the next few days before we make any decisions, but that was always going to be a possibility. You would have to think about the Arc in the autumn. We know what three-year-old fillies can do in the Arc. We would definitely have to think about it. I guess it will all depend on how she comes out of today and whether she has a midsummer break now or gets in another run and has a break after that, but the Arc has to be a definite possibility.”

There is a chance that Love could emulate Oh So Sharp (Ire) (Kris {GB}) in completing the fillies’ triple crown, but O’Brien seemed cool on the idea in the aftermath of this second part of the equation. “The St Leger comes three weeks or a month before the Arc, so would it be too tough for a filly to do that and then go on to the Arc? I don’t know, but I suppose we will see how she trains and what the lads want to do.”

Of Ennistymon, O’Brien said, “We felt after Ascot that we would be happy to take the winner on again. It worked out how we thought it might. She was back a bit at Ascot and Frankly Darling got an easier time out in front and that changed today. We were delighted with her performance today and the quick pace suited. She is a very nice filly for Mrs Stockwell.” Frankie Dettori said of Frankly Darling, “The track was not for her. She just started hanging and all sorts.”