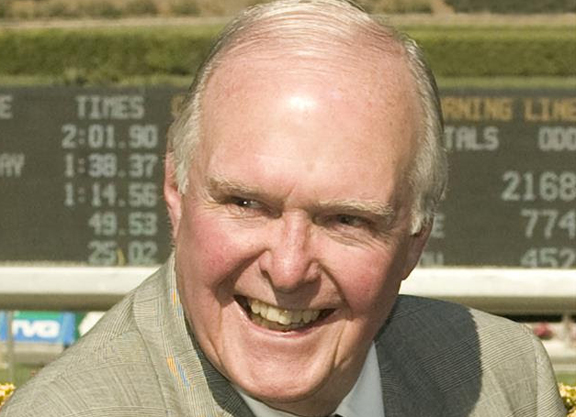 Sherwood C. Chillingworth, a longtime director and executive vice president of the Oak Tree Racing Association, died Tuesday at the age of 93. Known affectionately as “Chilly” to all who knew him, the native of Honolulu, Hawaii, was named an Oak Tree director in 1989, and later Executive Vice President in 1993. Chiilingworth was advocate for the many causes that the not-for-profit Oak Tree Racing Association funded since its inception at Santa Anita in October, 1969.

“Chilly has been a much loved member of the Breeders’ Cup family and we celebrate the vibrant life and good will of a true gentleman,” said Breeders’ Cup President and CEO Craig Fravel. “We recall his outstanding leadership of the Oak Tree Racing Association, known for the quality of racing it conducted, including four Breeders’ Cup World Championships at Santa Anita, and for their charitable contributions to our sport. Chilly was always quick with a laugh and full of appreciation for our game. We will miss him and our hearts go out to Sandy and his sons and daughters and many grandchildren and great grandchildren.”

Still active in funding various charitable causes, the Oak Tree Racing Association, which conducted its final fall meeting at Santa Anita in 2009, operated for one year at Hollywood Park in 2010, and then conducted fall meetings at the Alameda County Fair Grounds in Pleasanton through 2018.

“He was a great man who was a very big part of the Oak Tree Racing Association for many years,” said Hall of Fame trainer and fellow Oak Tree Board member Richard Mandella on Wednesday morning at Santa Anita. “He lived a full life and from what I knew, he loved every minute of it. He had a great sense of humor, he loved to bet and he loved our game.”

“He was a first class guy,” said Hall of Fame conditioner Ron McAnally. “Doc Robbins [original Oak Tree Director and John Henry’s attending veterinarian] admired him so much, and was so appreciative of everything he meant to Oak Tree and our racing here. Chilly was good for the horses and he was good for the business.”

“Chilly was one of the kindest and most gracious executives in racing,” said George Haines, former Santa Anita General Manager. “He treated the employees with great respect and was universally loved by all. His wit and humor will be missed but not forgotten.”

Chillingworth, who resided near Santa Anita Park with his wife Sandra, is also survived by four sons and two daughters, as well as several grandchildren. Services are pending.