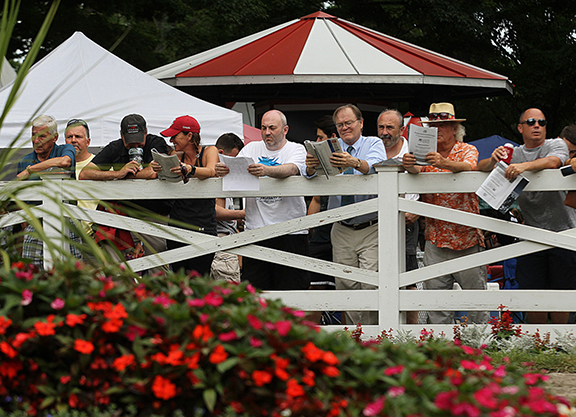 Fans on the paddock rail at Saratoga | Horsephotos

The New York Racing Association will increase the amount of green space available to fans by removing the group hospitality tent positioned alongside the paddock at Saratoga, it announced Tuesday. The removal of the Paddock Tent, which has been a permanent fixture at Saratoga for more than a decade, will return 240 square feet of picnic space to fans where they can enjoy an unimpeded view of the historic Saratoga paddock.

The Paddock Tent will be eliminated prior to the start of the 2020 summer meet at Saratoga Race Course, which will begin Thursday, July 16 and run through Labor Day, Monday, Sept. 7.

“A great deal of what makes Saratoga so special is the ability to see both the horses and jockeys up close. We are removing the Paddock Tent in order to offer more fans the exciting opportunity to watch these incredible athletes as they parade through the paddock prior to each race,” said NYRA CEO and President Dave O'Rourke.