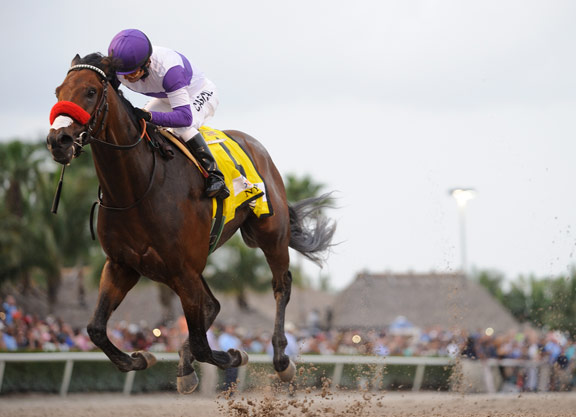 You couldn’t have drawn it up any better. Champion Nyquist (Uncle Mo) with the lead as they turn for home. Fellow unbeaten Mohaymen (Tapit) breathing down his neck on the outside… But that’s where the dream GI Xpressbet.com Florida Derby showdown came to an end. And rather abruptly, too.

Nyquist, under pressure from every angle while holding a narrow advantage through early fractions of :23.60 and :47.09, quickly repelled a bid from the Shadwell colorbearer after floating that one out to about the six path on the far turn and kicked clear. Nyquist began to wander a bit in midstretch and switched to his left lead late, too, but finished up full of run to establish himself as the clear-cut favorite on the First Saturday of May. It was 3 1/4 lengths back to longshot Majesto (Tiznow) in second. Fellowship (Awesome of Course) was third. Mohaymen, winner of Gulfstream’s GII Lambholm South Holy Bull S. and GII Xpressbet.com Fountain of Youth S., had to settle for a well-beaten fourth as the 4-5 favorite after enduring a wide trip throughout.

“It’s such a team effort,” winning trainer Doug O’Neill said. “Like [owner] Paul [Reddam] said, I had reservations a month or so ago–Mohaymen in his own backyard, do we really want to do something like that? But we all very quickly got on the same page and, you know, I think we just had a very lucky trip.”

Nyquist, a $400,000 graduate of the Fasig-Tipton Florida Select 2-Year-Olds in Training Sale, earned a $1-million bonus offered by the sale company to any graduate of the 2015 sale that went on to win the 2016 Florida Derby.

The bay entered the starting gate in Hallandale a perfect six-for-six, highlighted by a trio of Grade I tallies in 2015, including the GI Breeders’ Cup Juvenile at Keeneland Oct. 31. Nyquist kicked off his sophomore campaign with a smart win in the seven-furlong GII San Vicente S. at Santa Anita Feb. 15.

“I feel really good,” O’Neill added. “This is something that we drew up thinking two preps before the Derby was going to leave him with a lot of real fresh legs and he’s got a lot of miles underneath him in the morning, and we thought we’d have an afternoon fresh horse going into the Derby with two preps. Right now, I feel extremely happy, and, of course, like all the horses, you got to keep him injury free, and he’s got the mindset of a champion, so now it’s just to the whole crew and the racing gods to keep him injury free.”

Nyquist heads to the Bluegrass to begin his Derby preparations Sunday. He will be based at Keeneland, according to Reddam.

“Yeah, I love the Keeneland, and [assistant trainer] Leandro [Mora] and I have talked about this,” Reddam explained. “Just the training track synthetic course is such a blessing. I mean, as long as he stays healthy and doesn’t get sick on us, he can train on a daily basis. We love the Keeneland option, and that’s our goal.”

Of the hefty Fasig-Tipton bonus, Reddam added, “Well, you know, you only got the bonus if you won, right, so we wouldn’t have come unless we had certainly a decent chance. We didn’t know at the end of last year that Mohaymen was going to be such a big horse on the radar, and my feeling was, well, gee, if you’re afraid to go run against someone, how do you really think you have a Derby horse? We just stuck to our plan, and I thought if we get beat, we get beat, but we can’t be afraid. If you’re afraid in the business, you’re not going anywhere.”

Reddam and O’Neill, as well as jockey Mario Gutierrez, all have been here before courtesy of the 2012 dual Classic winner I’ll Have Another (Flower Alley).

“Well, now I feel like the heat is going to be turned up on us because we’re likely to be the favorite or a favorite certainly,” Reddam said. “We just have to all keep our feet on the ground, and there’s a lot more wood to chop. I think having been through it once before is really good for the team and what’s rare here is that we actually are a team, and you’re looking at exactly the same guys who went on the road with I’ll Have Another.”