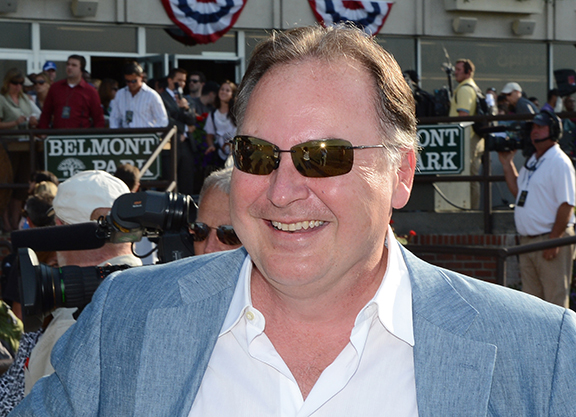 Richard E. Dutrow Jr., the GI Kentucky Derby-winning trainer whose long history of infractions culminated in a 10-year license suspension that is currently in effect until 2023, on Monday again had a request denied by New York regulators to reopen his case and possibly modify his penalty based on time already served.

The New York State Gaming Commission (NYSGC) kept Dutrow's case off the official agenda at its July 16 monthly public meeting, but chairman Barry Sample brought the issue up for the record as the very last item of the meeting under the “new business” section.

In addition to saving the meeting's most controversial item for last, Sample also kept it extremely brief. His remarks regarding Dutrow clocked in at one minute with zero discussion among commissioners.

“Thoroughbred trainer Rick Dutrow, by his attorneys, previously filed an application to reopen an adjudicatory proceeding for consideration of a modified penalty,” Sample said. “The Racing and Wagering Board, a predecessor agency to this commission, determined that Mr. Dutrow was ineligible to reapply for any license issued by the commission for 10 years from the revocation of his license on Jan. 17, 2013, and fined him $50,000. The matter was discussed at our pre-adjudication meeting, and the members have decided in a vote of four to two to not reopen the case at this time.”

TDN could not obtain a voting breakdown for which commissioners voted for or against reconsidering Dutrow's case.

“That will be reflected in the findings and order,” Brad Maione, the NYSGC's director of communications, wrote in an email. TDN then requested that public document, but it was not made available prior to deadline for this story.

Dutrow could not be reached for comment. His 10-year suspension and $50,000 fine stem from a 2011 incident in which one of his Aqueduct Racetrack winners tested positive for an opioid analgesic and syringes containing a painkiller and a sedative were subsequently found in Dutrow's backstretch stable office.

A public petition posted earlier this year on Change.org has garnered 2,424 online signatures as of Monday in support of Dutrow being allowed to return to training. Dutrow had previously exhausted his legal appeals to have the case overturned or re-adjudicated.

One year ago this week, a federal bankruptcy court in New York issued a debt discharge order after Dutrow had petitioned the court for Chapter 7 protection. Dutrow's 2017 filing claimed he had zero income and total liabilities of $1.76 million. The New York State Racing & Wagering Board was listed twice in the creditor section of that bankruptcy protection filing, once for $30,113 and another time for an “unknown” dollar amount.

However, Maione wrote in a Monday email that Dutrow's $50,000 fine has been paid.

In separate NYSGC news, commissioners voted unanimously to revise the state's existing prohibited substances rule and to add another rule that requires appropriate veterinary oversight for the use of equine drugs.

“These rule amendments would implement several of the rulemaking proposals recommended in the Asmussen Report that Commission staff issued in November 2015,” NYSGC general counsel Edmund C. Burns wrote in a memo that was read into the record prior to the vote.

“The Association of Racing Commissioners International (ARCI) adopted this proposal as a model rule after receiving input and support from representatives from leading Thoroughbred organizations, including the American Association of Equine Veterinarians, the National Horseman's Benevolent and Protective Association, Inc., the Racing Medication and Testing Consortium, The Jockey Club and the Thoroughbred Horsemen's Association,” Burns wrote.

The full text of the new regulations can be accessed here (scroll to page six).