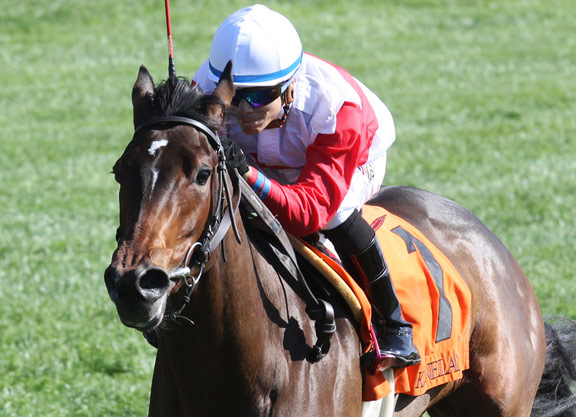 SUBTLE STEP (f, 2, Smart Strike–Understated, by First Samurai) stormed home to a dominant debut victory at Keeneland Thursday for Hall of Famer Shug McGaughey and longtime owner Stuart Janney. Let go at 13-1 for a trainer whose runners tend to need a start, the $280,000 KEESEP buy kept a close eye on the pacesetter from second through opening fractions of :24.09 and :48.73. Seizing control on the backstretch run, the bay powered clear in the lane under Jose Ortiz to don cap and gown by five lengths. Deadline (Flat Out) completed the exacta at odds of 27-1. The winner is a half to SP Pride of Stride (Candy Ride {Arg}) and a yearling filly by Orb. Her unraced dam, a half-sister to GSW Ask Me No Secrets (Seattle Slew) did not produce a foal this year, but was most recently bred to Lemon Drop Kid. Subtle Step hails from the family of GISW multimillionaire Albert the Great (Go for Gin) and undefeated “TDN Rising Star” and recent GIII Jessamine S. winner Rushing Fall (More Than Ready). Lifetime Record: 1-1-0-0, $39,000. Click for the Equibase.com chart or VIDEO, sponsored by Fasig-Tipton.