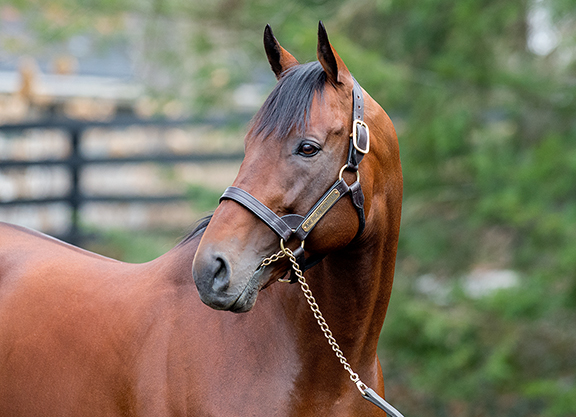 American Pharoah, sire of the debuting Elephantine (Jpn), has 13 winners from 16 runners in Japan | Sarah Andrew

In this continuing series, we take a look ahead at US-bred and/or conceived runners entered for the upcoming weekend at the tracks on the Japan Racing Association circuit, with a focus on pedigree and/or performance in the sales ring. Here are Sunday's horses of interest for this weekend running at Niigata and Tokyo, the site of the G1 NHK Mile Cup, featuring GI Breeders' Cup Filly and Mare Sprint winner Wavell Avenue (Harlington)'s son Grenadier Guards (Jpn):

5th-TOK, ¥13,830,000 ($127k), Allowance, 3yo, 1600m
ANNUNCIATION (c, 3, Union Rags–Acquant, by Giant's Causeway) has made all three of his career starts to date over this course and distance, winning his maiden at first asking before a pair of slow-starting, fast-finishing runner-up efforts at this level. A $230K Keeneland September graduate, the May 12 foal is out of a winning daughter of MGSW Social Queen (Dynaformer), the dam of 2015 GI Belmont Derby winner Force the Pass (Speightstown). A short price is all but guaranteed, but this race is his for the taking with a clean break. B-Colts Neck Stables LLC (KY)

6th-NII, ¥14,360,000 ($132k), Allowance, 4yo/up, 1800m
BONDING TIME (c, 4, Kitten's Joy–Imagistic, by Deputy Minister), purchased in utero for $30K at KEEJAN in 2017, was a $65K KEENOV foal and matured into a $210K KEESEP yearling. The full-brother to SW & MGSP Gentleman's Kitten made one appearance as a 3-year-old, finishing well down the track in an 11-furlong turf maiden at Hanshin 14 months ago and makes a switch to the main track for this allowance test. This is the female family of champion Revidere. B-Country Life Farm & Imagistic LLC (MD)