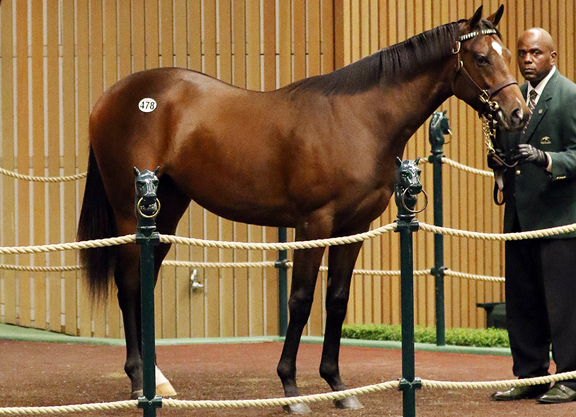 American Seed, pictured selling as a yearling in 2018, starts in the G3 March S. Sunday at Nakayama | Keeneland

In this continuing series, we take a look ahead at US-bred and/or conceived runners entered for the upcoming weekend at the tracks on the Japan Racing Association circuit, with a focus on pedigree and/or performance in the sales ring. Here are the horses of interest for this Sunday running at Hanshin, Nakayama and Chukyo Racecourses, the last of which hosts the G1 Takamatsunomiya Kinen and its defending champion US-bred 6-year-old mare Mozu Superflare (Speightstown):

Sunday, March 28, 2021
3rd-CKO, ¥9,680,000 ($89k), Maiden, 3yo, 1900m
MOZU TREASURE (f, 3, California Chrome–Somethinaboutbetty, by Forestry), a $200K Keeneland September acquisition in 2019, finished well down the field in her career debut on the grass at Kyoto last October and switches to the main track here. Though her Maryland-bred dam earned her lone graded placing on the turf, she was a four-time stakes winner on the dirt and has thrown GSP Dewey Square (Bernardini) and SP Something Super (Super Saver). This is also the family of MGSW/MGISP Eskenformoney (Eskendereya). B-Siena Farms LLC (KY)

11th-NKY, March S.-G3, ¥68m ($623k), 4yo/up, 1800m
AMERICAN SEED (c, 4, Tapit–Sweet Talker, by Stormin Fever) looks to remain unbeaten and untested in four tries since switching to the main track in the Sunday feature at Nakayama. Bred by Courtlandt Farm, who is set to be represented by GI Curlin Florida Derby favorite Greatest Honour (Tapit), this $825K KEESEP grad, listed-placed on the turf last year, has won his three previous races by a combined 17 lengths, including a ridiculously easy drubbing of his opposition in a Jan. 24 allowance over this track and trip (see below, gate 6). Don Adam's operation acquired American Seed's Grade I-winning dam for $1.15 million at KEENOV in 2005 and she has gone on to produce SW & GSP Sweet Tapper (Tapit) and MGSP Perregaux (Distorted Humor). Sweet Talker is a half-sister to the versatile Silver Medallion (Badge of Silver). Christophe Lemaire retains the call. B-Courtlandt Farms (KY)