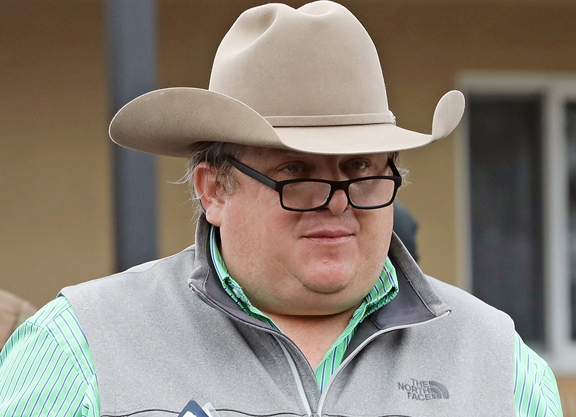 The Ocala Breeders’ Sales Company’s October Sale opened its two-day run Tuesday with an offering of 2-year-olds and selected yearlings and the polarized demand that has come to define the market in recent years accentuated by all the uncertainties of the global pandemic. A filly by Not This Time brought the session’s highest price when selling for $225,000 to Tonja Terranova from the consignment of Lisa McGreevy’s Abbie Road Farm. The yearling was one of two to sell for $200,000 or over. Eight yearlings sold for six figures during the session.

“It was about on par where it has been all year,” Stuart Morris, the session’s leading consignor, said of the market. “I’ve been at every venue so far east of the Mississippi River and it’s been consistent. The ones that vet and make the cut, you get paid very well for. The ones that are nice, get sold fair. But if there is anything on the vetting at all, they seem to just walk away from them. Which is what happens in a year like we’re in right now. It’s a buyer’s market. Everyone is on their heels, so they tighten up on the vetting and things of that nature.”

From the 170 catalogued yearlings, 135 went through the sales ring and, following the close of business, 55 were reported not sold for a buy-back rate of 40.7%. But trade continued for several yearlings post-sale Tuesday.

“I’ve already got three of my RNAs sold,” Morris said. “I think there are going to be a lot of RNAs sold tomorrow. I’m hoping.”

Of the yearlings not getting sold, Morris said his clients are considering options.

“It’s a mix,” he said. “We will make plans from here to go on to the 2-year-old sales or go on to the racetrack or wherever we are headed.”

A filly by freshman sire Not This Time attracted the day’s highest bid of $225,000 when Tonja Terranova, acting on behalf of an undisclosed client, signed the ticket on hip 149.

“She is a big, beautiful filly,” Terranova said of the yearling. “She had a great walk on her, very smooth. Every time we saw her, she just looked the part.”

The dark bay filly is out of the unraced Midnight Magic (Midnight Lute), a half-sister to graded winner Coalport (Kitten’s Joy). The yearling was consigned to Tuesday’s sale by Lisa McGreevy’s Abbie Road Farm.

“We’re delighted with the way she sold and even more delighted that Tonja Terranova bought her and they’re going to the races with her,” McGreevy said.

The yearling RNA’d for $14,000 at the OBS Winter Mixed Sale earlier this year and breeder Carolin Von Rosenberg reported she had sold the filly privately over the summer.

McGreevy consigned the youngster on behalf of an undisclosed client.

“The stallion has done so well since [the Winter sale],” McGreevy said. “It’s enormous the way the Not This Time foals are running. He’s on top of his game. I think the timing was perfect. The man who owns her is delighted and is excited he gets to buy some more horses.”

Not This Time’s early exploits at stud include the Bob Baffert-trained GI Del Mar Debutante and GII Chandelier S. winner Princess Noor, who topped the OBS Spring Sale when selling for $1.35 million.

Asked if she was surprised by the yearling’s sale-topping price, Terranova said, “Not with Bob having that filly who is so magnificent. Not This Time has had a great year in his first year. And I thought this filly was the complete standout of the sale. So we knew we were going to have to pay for her. I think OBS put out a really nice catalogue of horses and there are some really nice individuals here. We really fell in love with her and we were lucky we were able to get her.”

Terranova purchased a colt by Quality Road for $425,000 at the OBS June Sale. Racing in Eric Fein’s colors and trained by John Terranova, the juvenile made his debut at Belmont Park Sunday.

Colt Pike made the day’s second-highest bid, going to $200,000 to acquire a filly by Into Mischief (hip 248). Consigned by Morris on behalf of her breeder Pine Ridge Stables, the yearling is out of stakes-placed Indian Rush (Indian Charlie) and is a half-sister to stakes winners March X Press (Shanghai Bobby) and Harlan’s Honor (Harlan’s Holiday). The filly RNA’d for $140,000 at last month’s Keeneland September Yearling Sale.

“It’s kind of what I expected for where we are,” Morris said of the result. “She’s a nice filly. She is a touch immature, but she has a big future. She is from a quality family where fillies have run well and won early at two. I was hoping for a little more, of course, but it’s a weird year. We are just trying to get things done and I’m very happy she’s going to a great home with the Pike Racing outfit, Al and Salley and Colt do a really great job. We are very happy for the breeder.”

The October sale opened with an offering of 2-year-olds with a colt by the late Empire Maker (hip 39) bringing the section’s top price of $155,000 when selling to Zedan Racing Stables. The juvenile, who worked a co-fastest quarter-mile in :21 1/5 during Sunday’s under-tack show, is out of multiple stakes winner and graded placed Tempus Fugit (Alphabet Soup). He is a half-brother to graded winner Majestic River (A.P. Indy).

The OBS October sale continues Wednesday with an open session of yearlings. Bidding commences at 10:30 a.m.