Home » Archive » Shared News » Not Much Separates 14 in Shadwell Mile

Not Much Separates 14 in Shadwell Mile 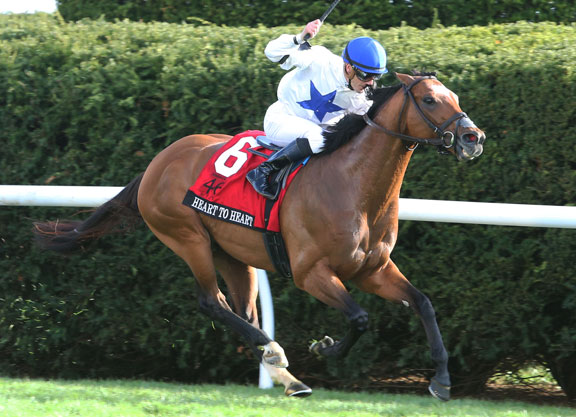 Whoever comes out victorious in Saturday's GI Shadwell Turf Mile at Keeneland and punches their ticket to the GI Breeders' Cup Mile in the Win and You're In event will have thoroughly earned it, as 14 horses, with hardly a hopeless longshot among them, clash in one of the deepest Grade I's of the year.

Last year's runner-up is back to contest the million-dollar event in Terry Hamilton's stalwart Heart to Heart (English Channel). Run down by a half-length in the 2017 renewal, the bay was off the board in his next two outings before bouncing back with tallies in the GI Gulfstream Park Turf S. and GI Maker's 46 Mile at this oval. Edged out by a neck in the GI Shoemaker Mile after that, the Brian Lynch trainee will have to bounce back from a dull sixth in the GI Fourstardave H. last out Aug. 11 at Saratoga.

His conqueror that day is looking to rebound from a disappointing try of his own. Barry K. Schwartz's Voodoo Song (English Channel), who scored a remarkable four victories last summer at Saratoga culminating in the GIII Saranac S., won just once in his next five starts before annexing the Forbidden Apple S. July 14 at Belmont. Digging in gamely to earn his defining triumph in the Fourstardave, he retreated to finish fifth at 3-5 last out in the GII Bernard Baruch H., his first defeat at the Spa.

Pulling off the upset that day and representing the home team in here, Shadwell Stable's Qurbaan (Speightstown) looms a danger. A two-time stakes winner in France, the chestnut jumped forward when treated with Lasix for the first time to gut out a three-way photo at 13-1 in the Baruch. Mike Smith picks up the riding assignment for trainer Kiaran McLaughlin.

Shadwell will also be represented by Almanaar (GB) (Dubawi {Ire}). Winner of the GI Gulfstream Park Turf H. last February, the chestnut was laid up for nearly 16 months before returning with a good-looking optional claiming score June 8 at Belmont. He followed that up by running a half-length second to stablemate Robert Bruce (Chi) (Fast Company {Ire}) in the GI Arlington Million last out.

William Lawrence's 'TDN Rising Star' Analyze It (Point of Entry) hopes to get back on track as the field's lone 3-year-old. Dominating his first three starts by a combined 15 3/4 lengths, including an easily local score in the GIII Kentucky Utilities Transylvania S. Apr. 6, the bay has suffered three straight heartbreaking defeats, twice at the hands of GI Runhappy Travers S. hero Catholic Boy (More Than Ready) in the GIII Pennine Ridge S. and GI Belmont Derby and once by 38-1 upsetter Carrick (Giant's Causeway) in the GI Secretariat S. last out.

Wesley Ward's Bound for Nowhere (The Factor) may have the highest ceiling of all, but will have to overcome the daunting 14-hole to prevail. Two-for-two over the local surface, including a four-length success in the GII Shakertown S., the bay ran a big third at 16-1 in the G1 Diamond Jubilee S. June 23 at Ascot and returned with a score in the Tourist Mile S. when last seen Sept. 1 at Kentucky Downs.